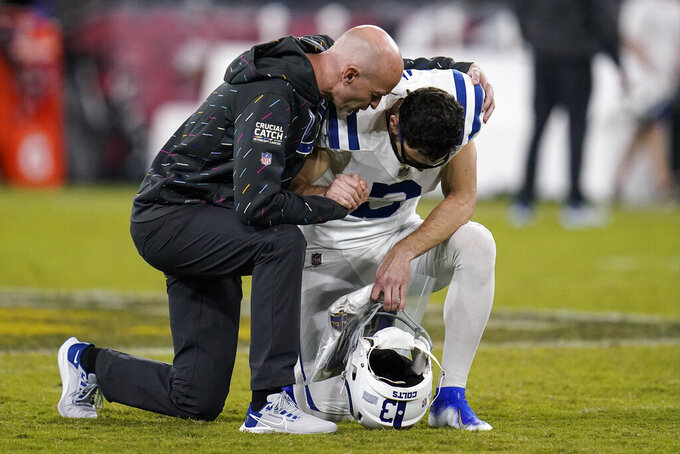 INDIANAPOLIS (AP) — The Indianapolis Colts already have seen this scenario.

Five weeks into the season, they're three games under .500 and two games back in the AFC South. Little has gone right and their postseason hopes appear to be fading fast.

Again, they're coming off a multiple-game road trip to face another struggling foe, this time, division rival Houston.

And after beating the odds in 2018 to make the playoffs, the Colts believe they can do it again.

“There are similarities for sure — just the gut-wrenching, the disappointment, the head-scratching," Frank Reich said, recalling how his first season as Indy's coach started. “We’ve done this before, we can certainly draw from that. Listen, everybody always talks about 1-0, but when you’re 1-4 it means a little something more."

Actually, the Colts were in worse shape back then, starting 1-5 in a 16-game season and falling two games behind three division teams.

But this is an older, more tested team that understands what it takes to win in the playoffs and that Sunday's opportunity may be their best chance to turn around this season.

Indy is back on its home turf for the first time in four weeks, facing the reeling Texans — losers of four straight.

“You cannot get overly concerned about a record," quarterback Carson Wentz said. “Whether you’re 4-1, 1-4, it’s always just about the next week."

Like the Colts, the Texans have dealt with an assortment of injuries.

Davis Mills replaced quarterback Tyrod Taylor in Week 2 and is expected to make his fourth consecutive start this weekend. Left tackle Laremy Tunsil will miss about a month after undergoing surgery on his left thumb. Tight end Pharaoh Brown (shoulder) and center Justin Britt (knee), both starters, sat out of Wednesday's practice and starting linebacker Kamu Grugier-Hill is dealing with a bad hip.

Houston has scored a paltry 89 points and been outscored by 52, both the fourth-worst marks in the league.

Yet the Texans, like the Colts, realize what a win this week would do for the locker room.

“The guys still here from last year, we know what it looks like when the locker room starts to fall apart," safety Justin Reid said. “Right now, at this point, this year and where it was last year, it’s completely different. The locker room has definitely held together much more closely this year, and we’ve just got to keep plugging away."

The injuries gave receiver Chris Moore an opportunity to showcase his skills last week and Houston is hoping for an encore performance this week.

After promoting Moore from the practice squad last weekend, the six-year veteran caught his first pass since 2019 and finished with five receptions for a career-best 109 yards. He even scored on a 67-yard TD reception.

“This guy comes to work every single day,” said Brandin Cooks, the Texans’ top receiver. “He works his tail off, he gets called up and his opportunity came, and he took advantage of it.”

The Colts activated four-time Pro Bowl receiver T.Y. Hilton from injured reserve Thursday and he could play Sunday — about seven weeks after he had neck surgery.

The 31-year-old Hilton said he initially considered retiring following the procedure and even spoke with Andrew Luck before the pain subsided and he put his post-NFL career plans on hold.

If Hilton does play, his presence could give Indy's offense a huge boost. In 19 games against Houston, Hilton has 102 receptions, 1,803 yards, 11 TDs and eight 100-yard games including his only one last season.

“Everybody knows when 13 is out there, we’re a different team,” Hilton said with a smile.

Houston’s special teams are looking to rebound from last week’s rather dreary performance.

Ka’imi Fairbairn missed two extra points and a field goal, but the worst mistake came when Cameron Johnston’s punt bounced off the back of teammate Terrence Brooks for zero yards and gave the Patriots great field position.

The Texans expect better results in Fairbairn's third game back since suffering a leg injury.

Blankenship had an MRI on his hip Tuesday and Reich said doctors found a “little something there.”

Badgley was in training camp with the Colts in 2018, but didn't make the team and wound up playing three seasons for the Chargers. He also played with Tennessee in Week 1 this season.