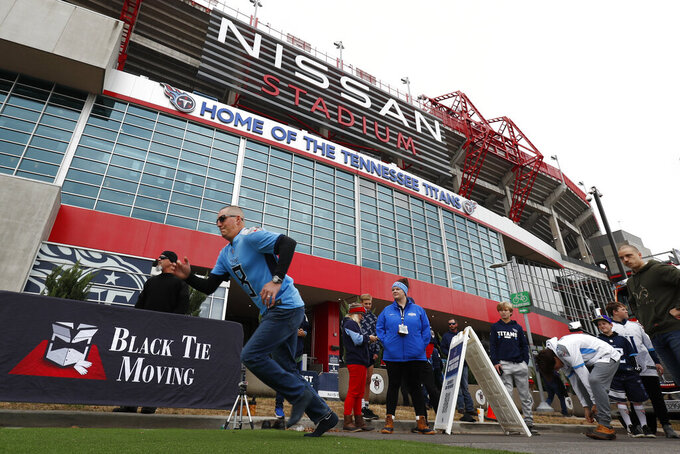 FILE - A Tennessee Titans fan runs a 40-yard dash outside Nissan Stadium before an NFL football game between the Titans and the Houston Texans on Nov. 21, 2021, in Nashville, Tenn. The Titans have gone from trying to modernize Nissan Stadium to working on plans for a brand-new stadium right next door after renovation costs more than doubled to $1.2 billion. (AP Photo/Wade Payne, File)

The two people are familiar with the details of the governor’s funding amendment and spoke to the AP on the condition of anonymity because the governor's budget amendment has not been released. It's scheduled for a public discussion Tuesday in front of Tennessee lawmakers, who would also need to approve of the plan to authorize state bonds.

The funding would fill in one piece of the puzzle for the Titans, who have gone from trying to modernize the existing Nissan Stadium to working on plans for a new stadium right next door after renovation costs more than doubled to $1.2 billion. Nashville Mayor John Cooper has lowered expectations about any potential funding from the metro government, saying earlier this month that “fundamentally, the city is not in the entertainment or stadium business itself.”

The sources mentioned that the new stadium plans would include some kind of roof, with one source saying the funding would be contingent on the stadium being enclosed. A covered stadium, whether it's a fixed or retractable roof, could help Nashville compete for the biggest events in or outside of sports, from the Super Bowl to NCAA basketball Final Four. Axios Nashville first reported on the governor's proposed funding for the new stadium.

The push comes as the Buffalo Bills landed an agreement Monday for a proposed $1.4 billion new open-air stadium, fueled by a record $850 million taxpayer price tag to help secure the franchise’s future in the region for the next 30-plus years.

The Bills and Titans stadiums, and the increasing price tags to fund such projects, will undoubtedly reignite arguments over whether taxpayers should be on the hook for new high-end sports facilities.

Earlier this month, Titans President Burke Nihill discussed the team's plans at a Metro Sports Authority board meeting, according to The Tennessean. The Titans currently are working with Metro Nashville officials on the design and costs of building a new stadium on Nissan's parking lots between the stadium and Interstate 24.

Nihill noted inflation is driving costs higher, and both Nashville and the Titans want to finish work in time for the 2026 season.

The stadium opened in 1999 on a 30-year lease and the Titans had originally planned to renovate it for $292 million. Nashville officials have been working on plans for a year to redevelop hundreds of acres around Nissan Stadium on the east bank of the Cumberland River.

That included renovating Nissan Stadium, with the first estimate $600 million. That doubled when contractors raised new concerns about the condition of the stadium and its infrastructure.

Nihill has said a new stadium is the better value in the long run.

“This is a very basic building in the eyes of the NFL,” Nihill said. “This is one of the bottom 20% of buildings in the NFL built before 9/11. Security enhancements adopted by the NFL haven't been added.”

Nihill estimated that reaching a deal for the new stadium, how to pay for it and design the new building could take more than a year. Construction should take 31 months.