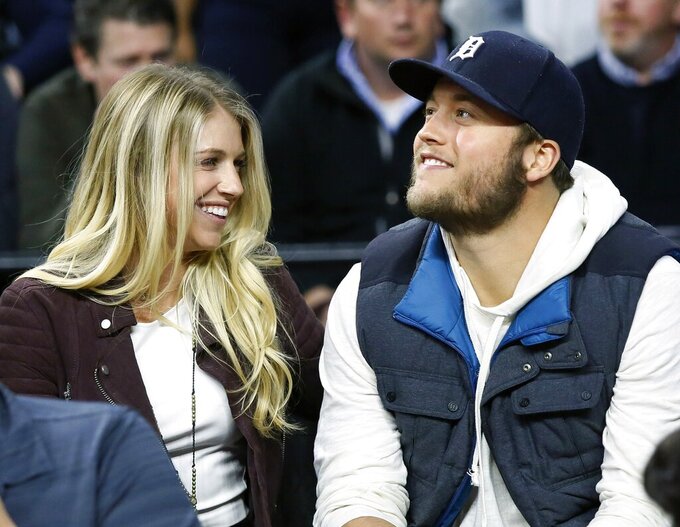 FILE - In this Nov. 17, 2015, file photo, Detroit Lions quarterback Matthew Stafford and his wife Kelly smile while watching the Detroit Pistons play the Cleveland Cavaliers during an NBA basketball game, in Auburn Hills, Mich. Matthew is juggling his job on the field and his role as a husband and father as his wife, Kelly, recovers from surgery to remove a brain tumor. (AP Photo/Duane Burleson, File)

ALLEN PARK, Mich. (AP) — Detroit Lions quarterback Matthew Stafford is juggling his job on the field and his role as a husband and father as his wife, Kelly, recovers from surgery to remove a brain tumor.

"There's been some long days and some tough times," Stafford said Tuesday after joining his teammates for a voluntary offseason workout. "But ton of help, ton of support and a strong wife to help me out."

Kelly Stafford had a 12-hour surgery last month after an MRI showed the tumor. She had vertigo spells within the last year.

Matthew and Kelly Stafford have three daughters. They started dating at Georgia where she was a cheerleader and he was the star of the football team. He was the No. 1 pick in the 2009 NFL draft and has spent his entire career with the Lions.

She posted on Instagram on Monday, sharing that she reached a goal to attend a wedding in the Atlanta with her husband.

"It's a lot to go through for anybody, especially a mother of three and wife to somebody who's got a high-profile job like myself," he said. "She's doing a heck of a job, keeping it all together. Had a lot of family and friend support, too. Her mom was in town for over a month. She was incredible. It let me do what I'm able to do here."

While at the training facility, Stafford has plenty on his mind. He's trying to master the scheme installed by new offensive coordinator Darrell Bevell.

"Having a new playbook to learn is kind of helping," he said. "I'm just sitting there going, 'Man, it's not old hat.' It's a bunch of new stuff. It's stuff I really got to dive deep into and try to make sure I'm on top of my game because I'm getting questions right and left from those guys. I'm trying to help them out as much as I can.

"Not to say I'm forgetting everything that's going on back home, but I'm for sure locked in when I'm here."

Stafford has missed very few of the team's offseason activities.

"His desire to be in this building and handle everything that he has to handle off the field, but come in here ready to work, that's just a true professional," coach Matt Patricia said.