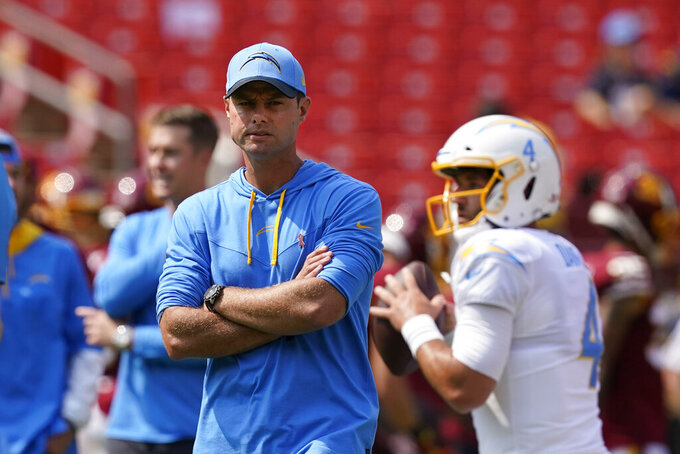 Los Angeles Chargers head coach Brandon Staley walking on the field during pregame warmups prior to the start of the first half of an NFL football game against the Washington Football Team, Sunday, Sept. 12, 2021, in Landover, Md. (AP Photo/Alex Brandon)

The narrative will be predictable. How Staley went from Division III defensive coordinator to NFL head coach in five years.

But the 38-year old Staley also wants the attention shifted another direction. Something that is more personal and real to him.

As the NFL begins its “Crucial Catch” initiative, Staley would like everyone to know about his most significant victory — being a cancer survivor after he was diagnosed with Hodgkin lymphoma 14 years ago.

“I wouldn’t be the head coach of the Los Angeles Chargers if it weren’t for my cancer journey. Cancer has been, if not the biggest, one of the biggest reasons why I’m here today,” Staley said on Saturday. “I think what cancer does is that it can bring out the best in you. I know that it’s brought the best out in me.”

Staley was in his first season as a graduate assistant at Northern Illinois in 2007 when doctors discovered a grapefruit-sized tumor on his right lung. The Perry, Ohio, native underwent six months of chemotherapy treatments in Cleveland during offseason breaks. That was followed by six weeks of morning radiation sessions in Chicago during the season so that he could continue coaching.

Cancer has also affected more than just Brandon. His mother, Linda, died from breast cancer in 2004. Bruce, his father, had thyroid cancer when Brandon was younger and completed treatment for prostate cancer last year.

“You can’t do it by yourself. I learned that by watching my mom and my dad,” Staley said. “I think that so much of beating cancer is believing in yourself. A lot of times, it’s knowing that there are other examples out there that show you that you should believe. I got to see it with my mom and dad. I was lucky that it was personal.”

Jason Staley — Brandon’s twin brother and younger sibling by 2 1/2 minutes — said that his brother’s approach to beating cancer bears many resemblances to his coaching philosophy and getting those around him to buy in.

“He’s always had this special way to get you to believe. Every time I talked to him, he explained, this is what’s going on, this is what I’m doing, and this is how we’re going to beat this,” Jason Staley said.

“The way he approached it was very methodical. There were no peaks and valleys. It was one treatment at a time; find what progress you can, and continue to get stronger and better.

“His ability to stay in the present and not let it get too big was the catalyst for him. Not letting the past affect him is the same way he coaches his players. He said, ‘I’m just going to compete, and I’m going to grind this thing into the ground,’ and I’ll be damned if he didn’t do it.”

Northern Illinois was the first step on a coaching road that to Staley being hired by the Chargers in January. After a second stint as John Carroll University's defensive coordinator in 2016, he was a linebackers coach in Chicago and Denver under Vic Fangio for three years before becoming the Los Angeles Rams defensive coordinator in 2020. In one season, the Rams defense went from 13th to leading the league.

Staley’s communication skills have drawn rave reviews from players. Defensive lineman Linval Joseph, who is in his 12th season, said the way Staley has explained his system and philosophy has been the best he has experienced in the league.

Joseph isn’t the only player to share that sentiment.

“Coach Staley is very open. He brings it to us, his plan. He listens to us, and he sees how we see it, too. He asks how we see it,” safety Derwin James said. “We are constantly communicating, and that’s what makes him so great as a coach. It’s not just, ‘Hey, you do it this way.’ It’s both ends of the stick.”

Staley’s first win as an NFL coach came on Sept. 12, when the Chargers rallied in the fourth quarter to defeat the Washington Football Team 20-16. It also was on what would have been Linda Staley’s 64th birthday.

“That meant everything. That would have been the 18th birthday we celebrated without her, and this is the first one where I haven’t been sad,” Jason Staley said. “As a brother, that’s the best gift he could have given. She loved watching us play sports.”

Jason Staley said seeing his brother have the platform to reach and inform others about cancer awareness is more important than the wins and losses on the field, especially during the league’s many cancer awareness programs in October.

It goes back to when they were 12 years old, sitting at a kitchen table and hearing that their mom had breast cancer.

“His goal is for the 12-year old kid that gets this news in 2021, that they don’t have the same outcome we did,” Jason Staley said. “From a platform standpoint, the most important thing is just his ability to make a difference and keep my mom’s memory and legacy alive.”

The Chargers come into Monday night’s game 2-1 after a thrilling 30-24 victory at Kansas City gave them their first 2-1 start in nine years. While Justin Herbert has directed a pair of fourth-quarter comebacks this season, the defense, where Staley still calls the plays, has set up the drives with takeaways.

The Raiders, who are expected to have a large continent of fans at the Hollywood Park stadium, are 3-0 for the first time since 2002. Derek Carr leads the league with 1,203 passing yards entering Week 4 and has led Las Vegas to two overtime wins.

While Staley is still emerging and adjusting to being an NFL head coach, he has already helped others going through their cancer journey. He met a Chargers season-ticket holder who was recently diagnosed with non-Hodgkin lymphoma during an event in April.

“You need to see other examples of why you should believe that you can do it,” Staley said. “I think hopefully, from me, they can see somebody that — I’m just a kid from Perry, Ohio. I was in Division III five years ago. You can live your dreams; you can do anything that you dream of if you believe in yourself.”