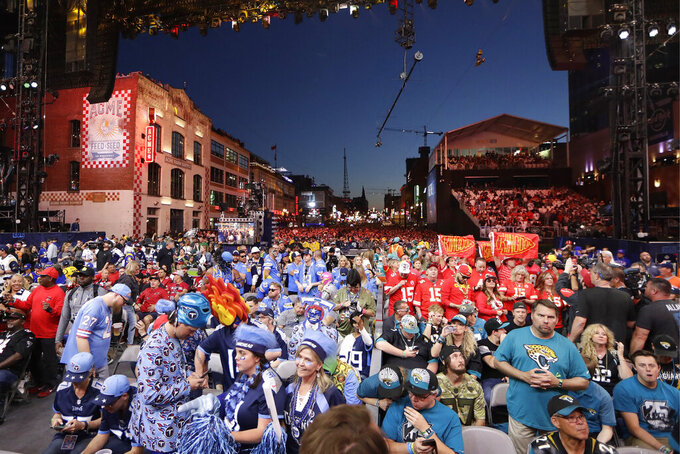 Fans sit on the main stage during the second round of the NFL football draft, Friday, April 26, 2019, in Nashville, Tenn. (AP Photo/Mark Humphrey)

PITTSBURGH (AP) — The Pittsburgh Steelers expect third-round picks Diontae Johnson and Justin Layne to get their hands on the ball. That's where the similarities in their job descriptions end.

The Steelers began the process of reloading following the high-profile departure of star wide receiver Antonio Brown by taking Johnson with the 66th overall selection in the NFL draft on Friday night then took aim at a secondary in serious need of a ballhawk or two by grabbing Layne with the 83rd pick.

Johnson understands the parallels he shares with Brown. Both are 5-foot-10. Both are around 180 pounds. Both played collegiately in the Mid-American Conference. Both posted 40-yard dash times that didn't exactly dazzle pro scouts.

Yet Johnson — selected with a pick the Steelers acquired when they sent Brown to Oakland in March — knows that's where the parallels end. Brown is a great player. The three-year letterman at Toledo is eager to write his own story.

Namely, attack defenses in a way that renders his lack of breakaway speed — at least according to the stopwatch — meaningless. The player who ran a so-so 4.53-second, 40-yard dash won over the Steelers' coaching staff with his ability to win one-on-one battles at the line of scrimmage.

"He's a tremendously gifted young man," Drake said. "The most natural catcher that I've seen in a while. ... He doesn't have great timed speed but he plays the game fast. He's really, really good against the press and this is a press league. DBs walk up to your face and try to fingerprint you. He gets off bumps, gets in and out of his breaks as well as anybody I've seen in a long time."

Johnson caught 43 passes for 663 yards and seven touchdowns for the Rockets as a redshirt junior last season and was named the MAC's Special Teams Player of the Year after returning a punt and a kickoff for touchdowns. He'll likely get a chance at special teams too, where Brown first distinguished himself after being taken in the sixth round out of Central Michigan in 2010 before developing into one of the top receivers in the league.

Brown's record-setting run in Pittsburgh ended with an ugly divorce in the offseason, with the Steelers sending him to the Raiders. They used one of the picks they acquired from Oakland to grab a player that joins a room that will have a decidedly different feel with the prolific but also high-maintenance Brown out west.

This is the third straight season the Steelers have taken a wide receiver in the top three rounds of the draft. They selected JuJu Smith-Schuster in the second round in 2017 and James Washington in the second round last year. Pittsburgh signed former Jacksonville Jaguar Donte Moncrief to a two-year deal in March and also have Ryan Switzer and Eli Rogers in the mix.

Drake likes Johnson's versatility and expects the Steelers will move him around instead of just sticking him in the slot. Drake also isn't worried about Johnson's 40-time. The coach who counts Larry Fitzgerald among his former pupils doesn't believe the stopwatch tells the whole story.

"We want that guy, that blazer but normally with that package of that dynamic speed, very seldom do you get the total package," Drake said. "This guy has the ability to be a total package guy."

Pittsburgh is hoping to one day say the same about Layne, who arrived at Michigan State as a wide receiver before moving to cornerback during his freshman season to help address a spate of injuries at the position. At 6-2 and 192 pounds he has the size to be a potential difference maker on the outside for a secondary that picked off just five passes in 2018.

"He's competitive, he's not afraid to throw it up in there," Steelers defensive backs coach Teryl Austin said. "He's got a lot of good things to work with."

Even if Layne didn't always get a chance to show it. He picked off just three passes during his career with the Spartans, though his 15 pass breakups in 2018 ranked among the top 10 in the Football Bowl Subdivision.

Layne called the move from offense to defense "nothing major." Last he checked, the game is still the game.

"I've been playing both ways my whole life," said Layne, who went to Benedictine High School in Cleveland, the alma mater of late Hall of Fame Steelers coach Chuck Noll. "I'm a football player today. I expected to go in the second round but it's all good. They're going to feel me."