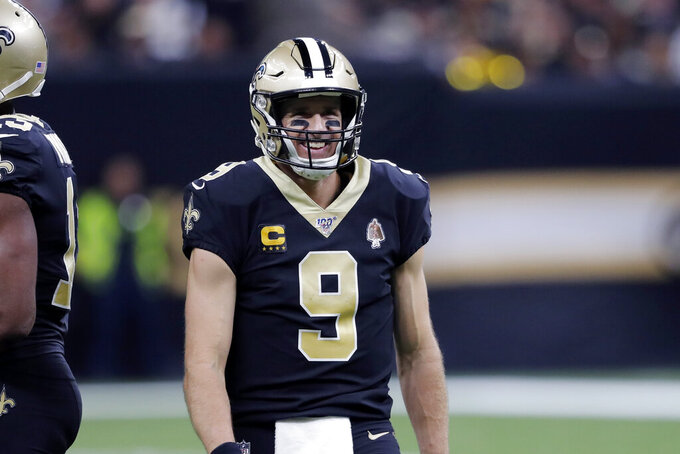 NEW ORLEANS (AP) — The Saints are playing so well, they were not thrilled with having a week off, even though it occurred at what normally is the perfect time.

Coming off a bye halfway through the season, New Orleans will take a six-game winning streak into its home matchup with Atlanta on Sunday. The most recent two were dominant — a 36-25 win at Chicago in which the Bears scored two touchdowns in the final 2:31, followed by a 31-9 victory at home against Arizona.

"Everybody has a bye week and you have to deal with it, but this year I felt like the D-line was playing at an extremely high level and as a team we were playing at a high level," said defensive end Cam Jordan, who has a team-high eight sacks. "We have to go into this week with the same focus that we had the last six or seven weeks."

The numbers are impressive on both sides of the ball.

Defensively, the Saints have held five consecutive opponents to 257 yards or fewer, their longest streak without allowing at least 260 yards since a similar one in 1992. They have given up 10 or fewer points in three of their last five games.

On offense, they survived the loss of Drew Brees to a right thumb injury for five weeks. Backup Teddy Bridgewater went 5-0 as a starter, guiding the Saints to 31 points and 457 yards against Tampa Bay and 424 yards in their win against the Bears.

Brees returned Oct. 27 against Arizona and looked like he had never been out. The Saints finished with the exact same number of yards (510) they had in their opener against Houston, the only other game he completed. He hurt his thumb in the first half of a Week 2 loss to the Los Angeles Rams.

"That's the tough thing about a bye week," offensive tackle Terron Armstead said. "We're trying not to disrupt the momentum or have it come to a halt at all."

New Orleans (7-1) now controls its own fate in the race for the No. 1 seed in the NFC. Green Bay's loss to the Los Angeles Chargers on Sunday dropped the Packers a game behind the Saints. San Francisco (8-0), the lone team ahead of New Orleans, plays in the Superdome on Dec. 8.

The NFC's other 7-2 team, Seattle, lost to New Orleans at home in the first game Brees missed.

Armstead liked the feel of Monday's practice after coach Sean Payton gave the team the entire week off.

"Today was really important for us to hit the ground running the way we did," Armstead said. "The tempo was up, the energy was up, the competition was up. We went ones (starting offense) versus ones (starting defense). I think we've got a really good team."

Everything. New Orleans leads Carolina by two games in the NFC South and has not trailed in the second half of any game since Week 4, when Dallas led 10-9 before the Saints went ahead on a field goal early in the fourth quarter.

With Brees back, the Saints hope to get healthier around him on offense. Running back Alvin Kamara (ankle, knee) and tight end Jared Cook (ankle) have missed the past two games.

Bridgewater endeared himself to fans by going 5-0 as a starter in Brees' absence, but Brees showed everyone the difference between a caretaker and a playmaker by going 34 of 43 for 373 yards and three touchdowns against Arizona. In his two full games, he has averaged 371.5 passing yards and thrown for five touchdowns. Bridgewater averaged 241.0 yards and threw for nine scores in his five starts.

The Saints do not go more than three deep at wide receiver, and with Tre'Quan Smith injured, depth is even more limited. Other than Michael Thomas and Ted Ginn, the rest of the wideouts have four catches for 19 yards.

The Saints will provide an update on Kamara and Cook on Wednesday.

3 — The Saints have won three straight and eight of their last 10 coming off byes, although some of the recent ones have been close. They beat Baltimore 24-23 last year and edged Carolina 41-38 in 2016.

The Saints play four consecutive games against NFC South opponents, starting with Atlanta (1-7) at home on Sunday, then at Tampa Bay, home for Carolina and at the Falcons.