Texans sticking with Kyle Allen despite ugly loss to Miami 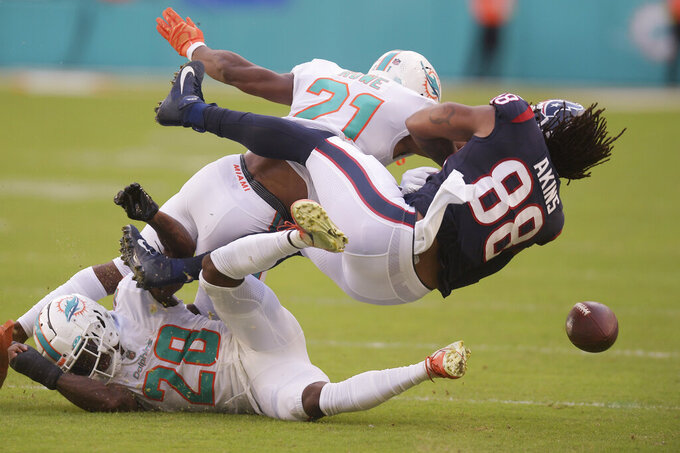 He shut the speculation down quickly Sunday. He’s sticking with Kyle Allen, even after Allen struggled in an ugly 30-15 loss to the Miami Dolphins.

“We’re not going to put a guy, give him his first start and start yanking and things like that,” Smith said. “We let a guy play. We want to see him. We’ve got to eliminate those turnovers. But I thought he did some good things throughout the game. But we’re not quite there yet as a team."

Allen, who started in place of struggling second-year quarterback Davis Mills, was 26-of-39 passing with 215 yards and two interceptions. He was candid after the game about his poor play.

“I didn’t execute my job today,” Allen said. “And I know at the quarterback position, you can make things right when things are wrong. That’s my job to do that. I’ve just got to play a lot better.”

Houston’s offense struggled so much that it may not have mattered who was at quarterback. It turned the ball over three times — not including two fumbles that they were able to recover.

The Dolphins outgained the Texans 287-32 en route to a 30-point halftime lead. The Texans lost their ninth game of the season and their sixth in a row. They rushed for just 36 yards on 2.6 yards per try, and rookie Dameon Pierce matched last week's season low of 8 total yards rushing.

Texans receiver Brandin Cooks said he felt the game slipping away offensively from the moment they stepped on the field.

Allen, who is on his third NFL team in five seasons, had not played this year. His last appearance was on Dec. 26 last year against Dallas while he was with Washington.

He threw an interception in the first half deep in Texans territory, which sparked a Dolphins scoring onslaught in which they scored 20 points in the second quarter.

“The interception early was just a bad ball, I can’t do that,” Allen said. “That’s essentially a Pick-6 with them getting the ball on the 2-yard line, and then we’re down 17-0 at that point. I’ve got to be a lot better if we want to win games.”

Smith said he was encouraged by the Texans' second half in which they put together three scoring drives, including touchdowns by running back Dare Ogunbowale and tight end Jordan Akins .

“We’re building, and eventually we’re going to get it done,” Smith said. “Right now it’s kind of easy to take shots at us because we’re not quite there. So we’ll take that, but eventually we’ll get over the hump.”

Their schedule doesn’t get much easier, though. The Texans will face Cleveland, Dallas, Kansas City and Tennessee in their next four games.