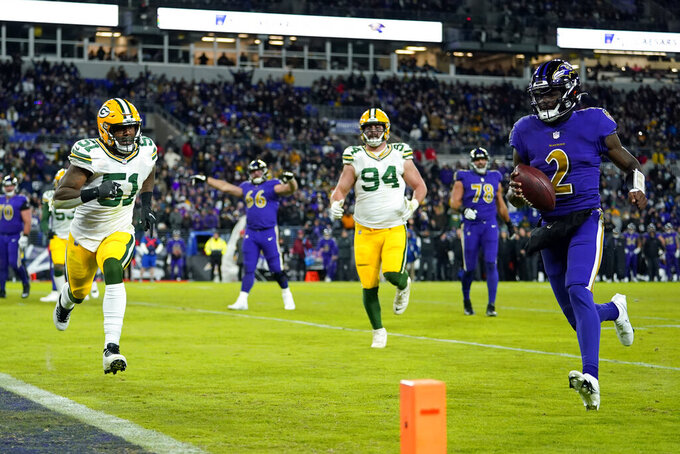 OWINGS MILLS, Md. (AP) — The postseason is arriving early for the AFC North.

“I’d say every week from here on out is a playoff game,” said Zeitler, a 10-year veteran now playing for his third AFC North team.

Welcome to the NFL's perfect storm of parity. The co-leaders of the AFC North — Baltimore and Cincinnati — are also just a game ahead of last-place Cleveland. Sandwiched between in third place are the Pittsburgh Steelers, who would be part of that first-place deadlock if not for a tie against what was then a winless Detroit team.

Nobody in the AFC North is below .500. In fact, nobody's been below .500 since Pittsburgh was 2-3 after Week 5. There's another division — the AFC West — with everyone at .500 or better, but Kansas City has a two-game lead atop that group, which could make the finish a bit less suspenseful.

No such problems in the AFC North, where each team will play two of its last three games within the division. And the four remaining non-divisional matchups are awfully compelling: Browns-Packers and Steelers-Chiefs this week, followed by Bengals-Chiefs and Ravens-Rams on Jan. 2.

In Week 18, the Steelers visit Baltimore and the Bengals play at Cleveland. If not for that Pittsburgh tie against the Lions, a four-way deadlock at 9-8 would be a remarkably realistic scenario.

“If you’ve been doing this for a while, obviously rookies won’t understand, but really you just got to get in, right? You got to peak at the right time," Steelers quarterback Ben Roethlisberger said. "And I’m not saying we’re peaking or we're close to it, but we’re winning the games that we, you know, are the close games or we’re coming back, we’re fighting. So we know that there is a little bit of life and we’ll just keep fighting one week at a time.”

Maybe we should have known something was up after Week 2, when all four teams in the AFC North stood at 1-1. Since then, Baltimore has held at least a share of the division lead after every week, but when the Ravens have had sole possession of it, it's never been by more than a game. Now, a three-game Baltimore losing streak has helped the Bengals (8-6) pull even.

The Ravens (8-6) play at Cincinnati this weekend with the winner taking over first place alone.

“We know we have a great challenge this week,” said Zeitler, who is in his first season with the Ravens after playing previously for the Giants, Browns and Bengals. “They’re playing very well. We’re going to have to give it everything we’ve got to take care of business.”

The situation in the AFC North is an extreme version of what's been happening all around the league. There are 27 teams still with a mathematical chance to win the Super Bowl. That equals the most in NFL history with three weeks left in the regular season.

“The whole AFC feels like it’s kind of a jumbled mess at times,” Roethlisberger said. “I think our division could be argued as one of the toughest in the NFL, and so we’re constantly beating each other up.”

Pittsburgh (7-6-1) has that tie against Detroit to look back on with regret. Cleveland (7-7) also could be in a tie for first if not for a last-second Las Vegas field goal that beat the Browns on Monday night.

The Steelers and Browns are both underdogs this week, and since Baltimore and Cincinnati can't both lose, a defeat would be costly for Pittsburgh or Cleveland.

The urgency is obvious for those teams. Then again, a loss would be a huge setback for anyone in this division at the moment.

“Try and go to 10-7. That is the goal," Browns defensive tackle Malik Jackson said. “We understand the position we are in. We understand we need to start helping ourselves, get some wins and put ourselves in the postseason.”