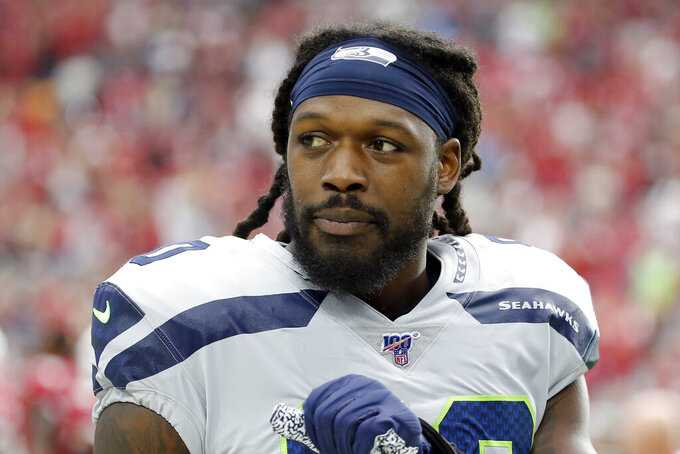 FILE - In this Sept. 29, 2019, file photo, Seattle Seahawks outside linebacker Jadeveon Clowney (90) watches during an NFL football game against the Arizona Cardinals in Glendale, Ariz. Jameis Winston, Cam Newton and Clowney didn't have to wait long at all to find homes in the NFL when they came out of college. The three former No. 1 overall draft picks are finding things moving much more slowly as they search for new homes or contracts this offseason. (AP Photo/Rick Scuteri, File)

NASHVILLE, Tenn. (AP) — Jadeveon Clowney made clear for months he wanted to be with a team that can win a Super Bowl, and he’s finally made his choice even if he didn't get the long-term deal in the process.

The Tennessee Titans announced Sunday they agreed to terms with the three-time Pro Bowl linebacker on a one-year contract. The Titans did not announce the terms Sunday. But ESPN.com reported the deal could be worth up to $15 million.

The Titans also shared on Twitter photos of Clowney next to a plane with controlling owner Amy Adams Strunk.

The No. 1 overall pick of 2014, Clowney went into free agency looking for a mega-contract that never came calling. The pandemic shut down travel for physicals, and Clowney didn't visit anyone once the NFL allowed free agents to meet teams in person.

That was despite having reported interest from Seattle, Tennessee, Cleveland, Baltimore, Philadelphia and New Orleans.

The Titans never hid their interest in the 6-foot-5, 255-pound Clowney.

On Thursday, several players started lobbying the pass rusher on Twitter, including three-time Pro Bowl left tackle Taylor Lewan, who noted Clowney's big bowl highlight at Lewan's expense with Michigan. Lewan wrote Thursday: “We can do this to other people’s teams now.”

“We have an offer out to JD, and we've talked to both him and his agent," Titans coach Mike Vrabel said Friday when talking to reporters.

Now Clowney joins a team that lost the AFC championship game in January and the coach whom the linebacker had his best season with when Vrabel was Houston's defensive coordinator in 2017.

Asked Friday how Clowney would fit in with the Titans, Vrabel said they ask and target players who love football, play with great effort and put the team first.

“I don’t think it’s too hard to function here and to be a great teammate,” Vrabel said.

Clowney still must pass through the testing protocol before he can join the Titans inside their building or on the field. But Tennessee has an extra day before playing the final game of Week 1 at Denver on Sept. 14.

He also ranks fourth for most tackles for loss over the past four seasons, trailing only Donald (77), Cameron Jordan and Chandler Jones (67).

This deal comes just over a year after Clowney's last big move.

Seattle traded for him on Sept. 1, 2019, hoping to keep him around as more than just a one-year rental, sending two players and a third-round pick in the 2020 draft to Houston for the pass rusher. The Seahawks also agreed not to franchise tag Clowney for a second straight year as part of the trade.

He had 31 tackles, three sacks, seven tackles for loss, a career-high four forced fumbles and two fumble recoveries in 13 games.

Clowney's acquisition was viewed as a success inside the Seattle locker room. Clowney had a handful of games when he was the best defensive player on the field and played half the season with a core muscle injury that required surgery in January.

Clowney also quickly won over Seattle’s locker room even as his injury kept him out of three of the final five games of the season.

His injury history has been the biggest knock on Clowney. He's played a full 16-game schedule only once in six seasons — in 2017 with Vrabel as his coordinator. The pass rusher had a career-best 9 1/2 sacks that season, the second of his three Pro Bowl seasons, and he also had 21 quarterback hits and 21 tackles for loss.

Clowney has 32 career sacks and also has scored four touchdowns off turnovers in 75 games played. He also has recovered seven fumbles.

4 hrs ago
5 hrs ago
8 hrs ago
By The Associated Press 8 hrs ago
By Brandon C. Williams 7 hrs ago