Titans competition at right guard continues for another week 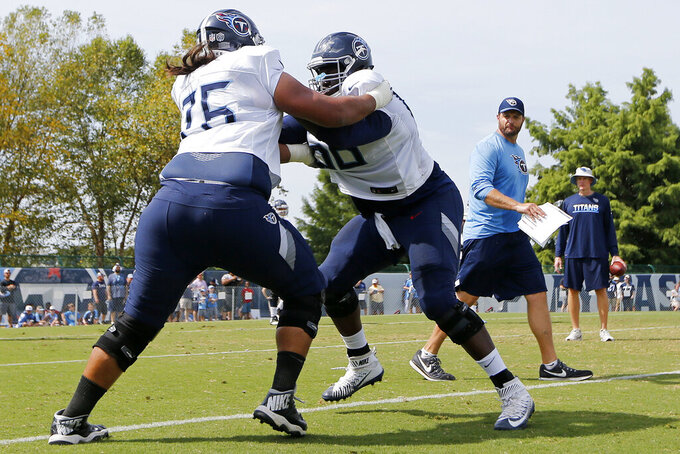 FILE - In this July 30, 2018, file photo, Tennessee Titans offensive guards Xavier Su'a-Filo (76) and Kevin Pamphile (66) run a drill during NFL football training camp in Nashville, Tenn. Pamphile says this is the first training camp he's seen coaches switching up along the offensive line, and the Tennessee Titans are letting the competition continue into the third week of the preseason. (AP Photo/Mark Humphrey, File)

NASHVILLE, Tenn. (AP) — Tennessee has one starting spot up for grabs on the offensive line, and it's at right guard.

The Titans have been mixing players all preseason looking for the right guy for the job.

Lineman Kevin Pamphile is going into his sixth NFL season and has never seen a training camp where linemen rotated so much. He's competing with Jamil Douglas and rookie Nate Davis, a third-round draft pick out of Charlotte, for the starting job.

"This has been crazy to where almost everybody has rotated in different spots," Pamphile said. "But it's exciting to see everyone accept that challenge."

Jack Conklin is back and healthy to reclaim his job at right tackle after finishing last season on injured reserve. Center Ben Jones, who rotated a bit with Corey Levin during training camp, anchors the middle with free agent signee Rodger Saffold at left guard. Three-time Pro Bowl left tackle Taylor Lewan will miss the first four games with a suspension for using performance-enhancing drugs with veteran Dennis Kelly set to fill in for him.

That leaves right guard the last remaining spot to be decided, a competition the Titans are content to let play out for at least another week.

"I've liked it, and I think that they all are competing," coach Mike Vrabel said. "We're just trying to figure out the best lineup. We'll probably let it go another week and try to figure out something here as we wrap up the Pittsburgh week."

Coaches mixed up the rotations more during training camp, which ended last week with the second joint practice with New England. Pamphile sees the rotation as something that will pay off during the season no matter who earns the starting job at right guard.

"Honestly, it's when you walk in the building and the coach is like, 'Hey I need you at this position,'" Pamphile said. "Like, 'Oh, OK." You have to be prepared for any situation. In the game, anything can happen and a guy can go down, and I got to go in. That's the scenario you have to have. I think as an o-line we accepted that, and we can thrive on that."

Pamphile played mostly at left guard with Tampa Bay before signing last year with Tennessee, and he started at both left tackle and right tackle because of injuries and illnesses.

Douglas is hoping his versatility and ability to play any of the three inside spots on the line help him. Miami drafted him in the fourth round of the 2015 draft out of Arizona State, and he started six games as a rookie at center and right guard. He has been with the Patriots, Falcons and Colts before signing onto the Titans' practice squad five weeks into last season.

"It's kind of been how my career has went," Douglas said. "When I came into the league, they first told me I was going to have to be versatile. It's been something I've been working on. I don't think it's a hard thing. You just have to learn to flip your mind, flip your body and go from there."

Davis has not practiced since Aug. 1 with an undisclosed injury.

Douglas practiced three straight days with the first-time offense at right guard last week before Pamphile took over for joint practices against New England. Douglas played at both guard spots and center, while Pamphile started the Titans' 22-17 preseason loss to the Patriots last weekend and wants the starting job for himself.

"Whatever the team needs me to be, I'll be prepared that day," Pamphile said.

NOTES: Country star Kenny Chesney watched practice Tuesday. The Titans worked outside with the temperature feeling like 105 degrees in full pads, heat that Vrabel said helps prepare the Titans for the season.