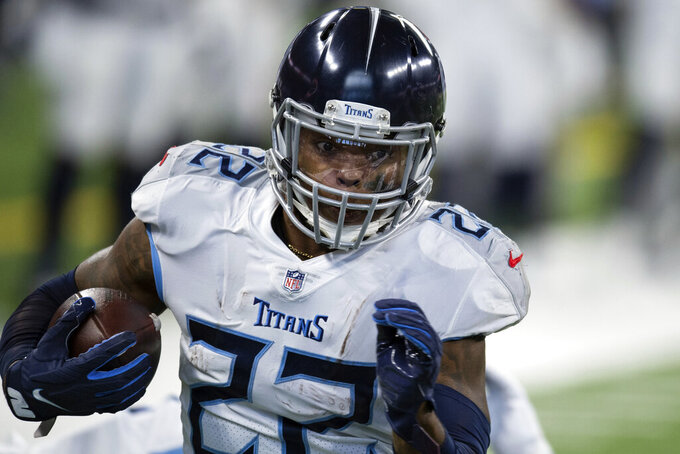 NASHVILLE, Tenn. (AP) — The Tennessee Titans finally get to show off what adding a seven-time Pro Bowl wide receiver can do for their already high-powered offense.

Julio Jones, a trade acquisition in June, joins AP NFL Offensive Player of the Year Derrick Henry, Pro Bowl wide receiver A.J. Brown and quarterback Ryan Tannehill coming off a career year of his own. The Titans open the season Sunday hosting Arizona, believing an offense already was one of the NFL's best is a bit better.

“It is a big opportunity, we are finally getting everyone back out there,” Tannehill said. “A lot of opportunities in front of us, it is just a matter of making it happen.”

The Titans are coming off their first AFC South title in 12 years, and this will be their first game without pandemic restrictions in 630 days. In that span, this franchise also reached the AFC championship game in January 2020, and Henry now is the NFL's back-to-back rushing champ.

This also will be the first time the Titans have opened a season at home since Mike Vrabel was hired as head coach.

Add in Arizona with Kyler Murray and All-Pro DeAndre Hopkins, it should be quite a game.

The Cardinals have made plenty of changes as well after going 8-8 last season and missing the playoffs after a strong start. They now have three-time AP NFL Defensive Player of the Year J.J. Watt and their own seven-time Pro Bowl receiver in A.J. Green.

Linebacker Isaiah Simmons can't wait to see how the Cardinals, old and new, match up with Tennessee.

“The good thing is we have players who bring special things to the game as well,” Simmons said.

Not only did Henry lead the NFL in rushing in 2020, he was the eighth man to run for at least 2,000 yards with 2,027 the fifth-best total in league history. The Titans tied for second averaging 396.4 yards per game and fourth scoring 30.7 per game. Tannehill set a franchise record with 40 touchdowns.

Now comes Jones, determined to prove himself at 32 after a nagging hamstring limited him to nine games last season. He is averaging 95.5 yards receiving per game, most in NFL history.

Green also gets a fresh start with a new team after a decade with the Bengals. He played nine seasons in Cincinnati and was once one of the NFL’s top receivers before his production dropped over the past few years. He missed the entire 2019 season because of injuries.

But the 33-year-old Green appears healthy and relishes the chance to be the second option behind Hopkins. Green essentially takes over for Larry Fitzgerald, who hasn’t said he’s retiring but also hasn’t committed to returning for his 18th season with the franchise.

Arizona’s depth in the secondary took a hit last week when veteran cornerback Malcolm Butler went on the reserve/retired list.

The 31-year-old Butler, a salary cap casualty in Tennessee this offseason, was expected to be a major part of the secondary before leaving the Cardinals late in camp. That leaves Robert Alford, Byron Murphy Jr. and rookies Marco Wilson and Tay Gowan as the main options to defend Jones and Brown.

Alford has missed the past two seasons with leg injuries. Coach Kliff Kingsbury said he’s comfortable with the way Wilson and Gowan have played during camp and won’t be afraid to use them.

Dupree says he's ready to start now, and coordinator Shane Bowen says watching the linebacker he doesn't look like someone who had an ACL injury late last season.

The Cardinals have a new-look backfield this fall after losing Kenyan Drake and adding James Conner in free agency from Pittsburgh. He joins holdover Chase Edmonds though it remains to be seen which gets the majority of the carries. Edmonds also caught 53 passes for 402 yards and four touchdowns last season.

When the Cardinals were at their best last season, Murray was a big part of the run game, rushing for 819 yards and 11 TDs. His run production decreased in the season’s final games, coinciding with Arizona’s slide out of the playoff picture.