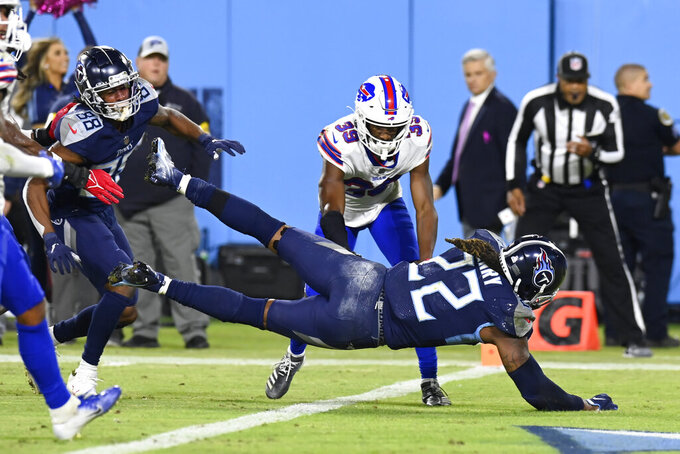 Tennessee Titans running back Derrick Henry (22) dives into the end zone for a touchdown ahead of Buffalo Bills cornerback Levi Wallace (39) in the second half of an NFL football game Monday, Oct. 18, 2021, in Nashville, Tenn. (AP Photo/Mark Zaleski)

Some prominent players have fallen by the wayside in fantasy thus far, but we still have some fantasy stars who are more than likely to reach the end zone this week. These are my best bets at the running back and wide receiver positions to score in Week 7.

Taylor, who went scoreless in his first three games, has scored four touchdowns over his past three, in addition to putting up more than 100 all-purpose yards each time. The return of T.Y. Hilton to the WR group should only help Taylor, as teams won’t be able to focus all of their efforts on the RB. He could have plenty of room to run against San Francisco's front this week.

Henry is the best bet to score at the running back position on any given week in the NFL. He’s had at least 50 more rushing attempts than the next-closest RB, and he’s still managed to maintain a 38.94% TD dependency this season. Look for the Titans to get him around 25 touches to keep the ball out of the Chiefs’ hands this week.

Henderson has scored in all but one game that he’s appeared in this season as the lead back for the Rams. On the field 82% of the time, and 37.93% TD dependent, Henderson has a favorable matchup in Week 7 against the Lions, who have the league’s worst run defense.

Jacobs has had an unassuming season, yardage-wise, but he’s still managed to score four TDs over the four games he’s played so far. Jacobs will take his 49.38% TD dependency into Week 7 against an Eagles team that has given up six TDs, and the sixth-most fantasy points, to running backs this season.

Fournette has had more than 100 yards combined in each of the past three weeks and has scored three TDs in his past two games. Fournette will face a good Bears defense this week, but few teams get into scoring position as often as the Bucs, so he could find the end zone.

Hill and the Chiefs this week are going up against the worst pass defense in the league in the Tennessee Titans. Hill has scored four times over his past three games, and he’s likely to add at least one more score to his tally in Week 7.

Patterson has scored only one rushing TD this season, but he’s made up for it in the passing game where he’s scored four TDs. He’ll take his receiving prowess into a matchup against the Dolphins, who’ve allowed 36 receptions and the fourth-most fantasy points to RBs this season. The focal point of the Falcons offense, the 39.06% TD dependent Patterson is a strong bet to score this week.

Brown has been the Bucs’ hottest WR over the past three games, racking up 32 targets for 1.58 points per target and almost 300 yards in that time. More importantly, he’s scored three TDs as well. If TE Rob Gronkowski misses his fourth straight game, Brown’s chances to score increase, and he already has a 36.14% TD dependency. He’ll face the Bears secondary this week.

Waddle is doing everything for the Dolphins in the passing game with DeVante Parker, Will Fuller and Preston Williams all sidelined, scoring Miami’s only two TDs in Week 6. Waddle is a dynamic playmaker, and he’ll likely have opportunities to score against the Falcons secondary in Week 7.

Adams only received five targets in a run-heavy Week 6 against the Bears, and he still managed to put up 89 yards. Scoring in two of his past four games, Adams gets his best matchup of the season against a Washington team that is the second-best matchup for WRs and the best matchup for opposing QBs in the league.