With Trubisky delivering, Bears get relief in lopsided win 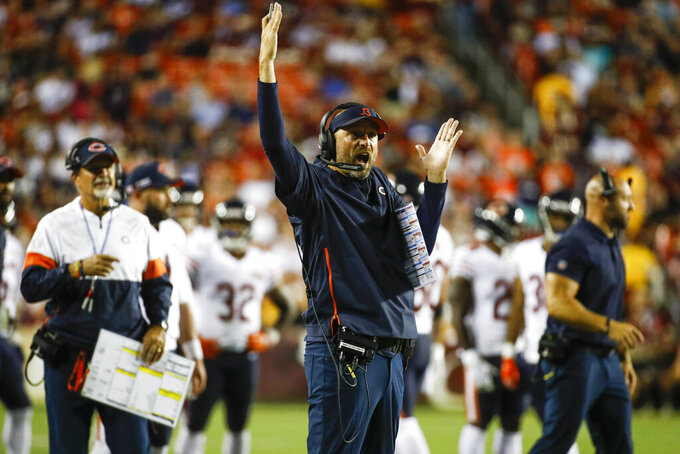 Chicago Bears head coach Matt Nagy, center, celebrates a touchdown by wide receiver Taylor Gabriel (18) after an official's review during the first half of an NFL football game against the Washington Redskins, Monday, Sept. 23, 2019, in Landover, Md. (AP Photo/Patrick Semansky)

LAKE FOREST, Ill. (AP) — Never mind the opponent, the Chicago Bears can breathe a little easier following a victory that was every bit as cathartic as it was dominant.

That's because Mitchell Trubisky finally stepped up after a shaky start to the season in a 31-15 romp at winless Washington on Monday night.

The No. 2 overall pick in the 2017 draft completed 25 of 31 passes for 231 yards and threw his first three touchdowns of the season — all to Taylor Gabriel in the second quarter.

It was a welcome sight for Chicago (2-1), even if he did it against a defense that ranks among the NFL's worst.

"I really like the fact of how he went into this week and handled this week of practice," coach Matt Nagy said Tuesday. "It transferred over to the game. In the game, he was just Steady Eddie the whole way. He was very smooth. He never got rattled."

It wasn't a perfect performance.

Trubisky got sacked for 14 yards on third-and-9 at the Washington 36 on the game's opening drive, possibly knocking Chicago out of field-goal range. He underthrew a fade to Allen Robinson in the end zone, and Josh Norman intercepted it near the goal line.

But it was a big improvement after shaky performances against Green Bay and Denver.

The offense scored four touchdowns in the first half, quite a change after Chicago managed just 19 points through the first two games.

"I think we are still growing on offense," Trubisky said. "I don't know if I would call it a breakthrough yet, we have to keep growing, and there is room for improvement. If we stick to the process, we will be all right."

The Bears' defense continues to dominate and the offense got clicking against a winless team after struggling through the first two games.

The Bears picked up the pace, using a no-huddle, and established a rhythm running a more simplified offense. But they're still not where they would like to be.

Gabriel caught touchdowns of 3, 1 and 36 yards in the second quarter. He wound up with six receptions for 75 yards before leaving in the second half with a concussion. And rookie David Montgomery ran for 67 yards on 13 carries.

Through three games, Tarik Cohen has yet to make a major impact carrying the ball or catching it.

The speedy and versatile third-year pro has just eight rushes for 16 yards and 12 catches for 82 on the season. He had just four carries for minus-2 yards against Washington and two receptions for 26 yards.

"He's a playmaker, and you want to try to get guys the ball as much as you can," Nagy said. "We have a lot of different guys. He could come out one game and have eight catches for 100 yards, and another game not. So that's the balance."

Nagy said the knee injury that knocked defensive tackle Akiem Hicks out of the game is not serious, saying he "just got a little bit sore" and should be OK.

He also praised Eddy Pineiro for "kicking through pain" after hurting his right knee lifting weights on Friday. Pineiro — who nailed a 53-yarder to beat Denver the previous week — was 1 of 2 on field goals and made all four extra points.

Nagy wasn't sure how much time right tackle Bobby Massie will miss after he was a surprise scratch because of vertigo.

Five — That's how many turnovers the Bears forced after taking the ball away just one time through the first two weeks. That was more like it for a team that led the league in takeaways last year. Newcomer Ha Ha Clinton-Dix had two of Chicago's three interceptions, running one back 37 yards for a touchdown. And Khalil Mack forced fumbles on his two sacks, with Chicago recovering one.

The Bears host Minnesota on Sunday in a game they can hardly afford to lose if they're going to repeat as NFC North champions. They dropped the opener to Green Bay at Soldier Field. And a loss to the Vikings at home would put them in a tough spot.