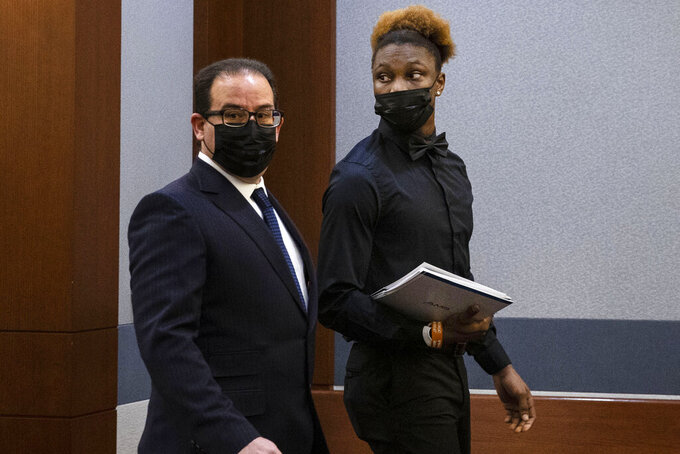 LAS VEGAS (AP) — Prosecutors are entitled to blood test results in their felony drunk-driving case against former Raiders receiver Henry Ruggs III, but they can't ask doctors to tell what Ruggs said about the fiery fatal crash or his injuries, a Las Vegas judge said Thursday.

“The blood test results will be released, in addition to the authentication of the medical records,” Walsh said. “Nothing to do with conversations or treatment as to any patient-doctor relationship.”

Kilgo-Washington’s attorney, Peter Christiansen, said his client is alleged to have been a victim in the case and the state isn't legally entitled to any of her medical records.

Neither Ruggs nor Kilgo-Washington had to appear in court for the brief hearing, during which the judge also pushed back from next week to March 10 the date of a preliminary hearing of evidence in the case.

Although doctors won’t be witnesses, the state can obtain testimony from police, firefighters, neighbors and passing motorists as witnesses.

Ruggs, a 22-year-old former first-round NFL draft pick, is accused of driving 156 mph (251 kph) in a residential area with a blood-alcohol level of 0.16% — twice the legal limit in Nevada — before his Chevrolet Corvette slammed into the rear of Tina Tintor’s vehicle early Nov. 2.

Ruggs faces a mandatory two years in prison and could get more than 50 years if he’s found guilty of DUI causing death or substantial injury and felony reckless driving.

He was released by the Raiders hours after the crash and remains on house arrest with strict conditions after posting $150,000 bail. Ruggs now uses ankle-wrapped GPS and alcohol monitoring devices.

Attorneys for Ruggs and Kilgo-Washington have declined to specify the injuries they received. Both were hospitalized after the wreck early Nov. 2.

Prosecutor Eric Bauman told the judge Thursday that the state seeks Kilgo-Washington’s medical records to prove she received substantial injuries according to the law.

Ruggs’ attorney, David Chesnoff, said during a Nov. 22 court hearing that Ruggs had a leg cast for more than two weeks.