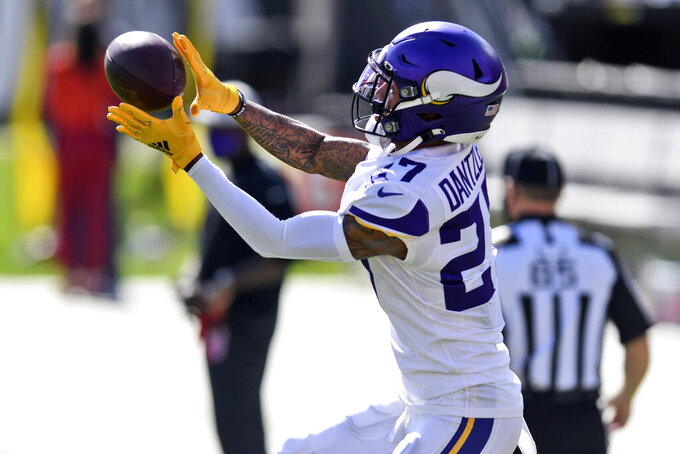 FILE - In this Dec. 13, 2020, file photo, Minnesota Vikings cornerback Cameron Dantzler (27) makes a catch before an NFL football game against the Tampa Bay Buccaneers in Tampa, Fla. The Vikings will be without their best cornerback, Patrick Peterson, for a daunting matchup for their defense against the highest-scoring team in the NFL, the Dallas Cowboys. Cameron Dantzler will take his place in the starting lineup. (AP Photo/Jason Behnken, File)

EAGAN, Minn. (AP) — Patrick Peterson has been as vital as expected for Minnesota's revamped secondary this season, providing a wise and steadying influence on his younger teammates and sound pass coverage of his own.

The Vikings are about to find out just how much of an impact Peterson has had. He'll miss at least the next three games with a hamstring injury, starting on Sunday night when the Dallas Cowboys and the NFL's highest-scoring offense visit U.S. Bank Stadium.

With Peterson sidelined, Cameron Dantzler will slide into the starting lineup at cornerback.

“He’s like a grandfather to me, basically. He’s straightforward. He’s that guy who’s going to be ‘100,’ keep it real with you,” Dantzler said, adding: “He’s a future Hall of Famer. He’s a great to have in your corner. He teaches us young guys a lot about the ins and outs and the game, so being under his wing I just feel very confident.”

Dantzler was shoved into heavy duty as a rookie last year, a third-round draft pick from Mississippi State who stood out in training camp but endured plenty of predictable struggles in game action during his first tour through the league. The Vikings simply didn't have better options then, which is why they stocked up on veterans during the offseason at cornerback with Peterson, Bashaud Breeland and Mackensie Alexander, who has held down the nickel role.

Xavier Woods was signed, too, to play safety next to Harrison Smith. Most important, the pass rush was vastly upgraded by the return from injury of star Danielle Hunter, the return from elsewhere of stalwart Everson Griffen and the addition of defensive tackles Dalvin Tomlinson, Michael Pierce and Sheldon Richardson.

“Those guys up front are doing a great job. For the most part, we’ve been playing good as a unit. There were a few plays, especially early on, we didn’t like obviously, but we’ve tightened some things up,” Smith said. “The thing is, it doesn’t mean everything’s fixed. You just go to the next week, the next issue, whatever. So you’ve got to stay vigilant with that.”

The Vikings rank 12th in the league in passing yards allowed per game, up from 25th at the end of last year. This improvement will get a stiff test from the Cowboys, with Prescott — who's recovering from a calf strain suffered on Oct. 17 before the team's bye — having thrown three or more touchdown passes in each of the last four games. Wide receivers Amari Cooper and CeeDee Lamb will be tough assignments for Breeland, Dantzler and the rest of their help.

“As a secondary we’re going to come together throughout the week and just study film on those guys and see what can we do to expose their weaknesses,” Dantzler said.

Dantzler fell down the depth chart during training camp, as coach Mike Zimmer — who's particularly tough on cornerbacks, long his pet position — demanded more from the second-year player. Dantzler was a healthy scratch in the season opener, a low point from which he has since recovered. He has been rotating in for Breeland at the spot opposite Peterson.

“I feel like that humbled me because I wasn’t expecting that, so it just made me push a little more than what I was doing at first,” Dantzler said. “I just felt like I had to give a little more."