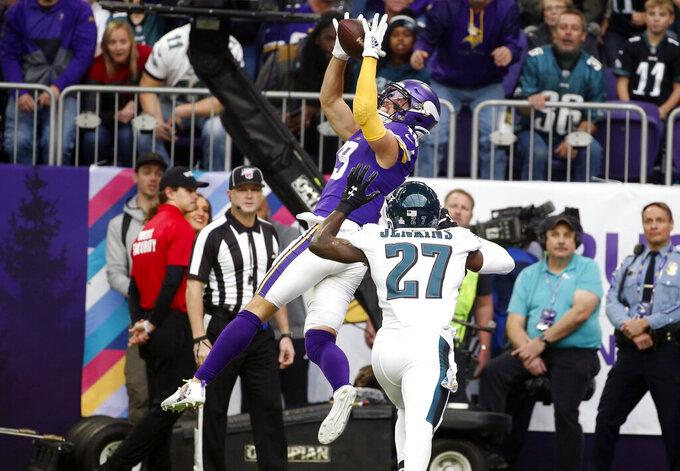 FILE - In this Sunday, Oct. 13, 2019 file photo, Minnesota Vikings wide receiver Adam Thielen, left, tries to catch a pass over Philadelphia Eagles strong safety Malcolm Jenkins (27) during the first half of an NFL football game in Minneapolis. Adam Thielen's season has been hamstrung by a hamstring injury, but the two-time Pro Bowl wide receiver remains an integral part of the offense for the Minnesota Vikings as evidenced by his diving catch in overtime to set up the playoff game win at New Orleans. (AP Photo/Bruce Kluckhohn, File)

EAGAN, Minn. (AP) — Minnesota Vikings wide receiver Adam Thielen has been listed as questionable to play in the divisional round game Saturday at San Francisco because an ankle injury that occurred in practice.

Thielen wore a wrap on his left ankle Thursday. He said he got tangled up with a teammate on the field Wednesday but declined to specify the nature or severity of the injury.

Thielen played in only eight full games during the regular season, limited by a hamstring injury he aggravated twice.

“No frustration. Just excited that I have the opportunity to play another game," Thielen said.

Wide receiver Stefon Diggs returned to practice Thursday after sitting out the previous two days because of illness. He said he had the flu.

“Even if I was 30 percent, I would be out there. I mean, it’s football, and it’s that time of the year,” Diggs said. “Nothing’s going to be perfect.”

Backup safety Jayron Kearse was listed as doubtful and nickel cornerback Mackensie Alexander was again ruled out, both because of knee injuries. Alexander, who was hurt Dec. 29 in the final regular season game, had minor surgery Thursday on his right knee.