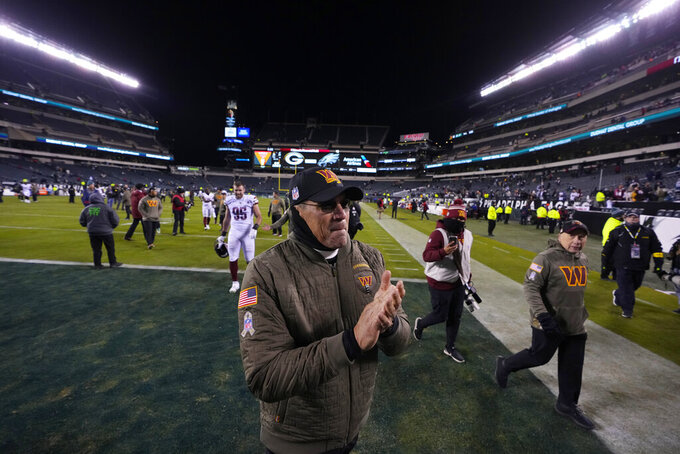 Ron Rivera and Washington are making a habit of shocking undefeated teams.

For the second time in three seasons, Rivera took a Washington team with a losing record on the road to hand an undefeated team its first loss of the season.

The Commanders, who entered the game with a 4-5 record, went to Philadelphia and handed the Eagles their first loss following an 8-0 start.

Five other teams that started 8-0 or better lost their first game to a team with a losing record on the road.

Rivera became the second coach in the Super Bowl era to hand two teams that started 8-0 or better their first loss. Don Coryell also did it, leading the Cardinals over the 8-0 Cowboys in 1977 and the Chargers over the 11-0 Dolphins in 1984.

Chicago's Justin Fields is on a record-setting stretch in his first full season as starter.

Fields has rushed for 555 yards in the last five games — the most for any QB in a five-game span in the Super Bowl era. He needs just 458 yards rushing over the final seven games to break Lamar Jackson's single-season record for quarterbacks of 1,206 set in 2019.

Fields threw for 167 yards and two TDs and ran for 147 yards and two TDs in a loss to Detroit on Sunday, becoming the second player in NFL history with at least 100 yards and two TDs on the ground and through the air in the same game. The only other player to do it was Colin Kaepernick in the playoffs following the 2012 season against Green Bay.

Fields is the fifth player in the Super Bowl era with at least one TD pass and one TD run in four straight games. He can tie Kyler Murray's record from 2020 of doing it in five straight on Sunday at Atlanta.

Fields is also the only QB in the Super Bowl era with more than one TD run of at least 60 yards in the same season.

His work on the ground has helped the Bears become the first team in NFL history to rush for at least 225 yards in five straight games.

Fields' production hasn't meant success for the Bears, who have lost the last three games. They are the first team to lose three straight while scoring at least 29 points in each game in NFL history.

Minnesota's Justin Jefferson delivered one of the greatest catches in NFL history with his one-handed grab against Buffalo on fourth-and-18 on Sunday.

The catch had a 28.8% completion probability, according to NFL NextGen stats, but Jefferson has made a habit out of making improbable grabs.

He had nine catches on Sunday with a completion probability of less than 50% — three more than any other player has had in a game in the NGS era that dates back to 2015.

Since entering the league in 2020, Jefferson has a league-high 54 catches with a sub-50% completion probability.

Jefferson finished with 10 catches for a career-high 193 yards and one TD. His 20 games with at least 100 yards receiving are the most ever for a player in his first three years, surpassing Randy Moss and Odell Beckham Jr.

Jefferson, who has 4,076 receiving yards in 42 career games, tied Lance Alworth and Beckham for the fewest games needed to reach 4,000 yards receiving.

Tom Brady added Germany to his list of countries with an NFL win.

Tampa Bay's 21-16 win over Seattle in Munich improved Brady to 4-0 in international games, with two wins in London and one in Mexico City.

Along with his 244 regular-season wins on U.S. soil, Brady became the first QB to win starts in four countries, breaking a tie he had with Derek Carr, Jay Cutler, Ryan Fitzpatrick and Russell Wilson.

Brady missed out on another record when he threw an interception, ending a streak of 399 straight passes without one. That was three shy of the record Aaron Rodgers set in 2018.

Kyle Shanahan hopes the seventh time will be a charm.

The San Francisco coach has a 48-48 career record with the Niners and looks to move into winning territory for the first time. He lost the previous six times he had a chance to go above .500.

It started with a loss to Carolina in his opener in 2017, which led to a 0-9 start that put him in a big hole. Shanahan got back to 25-25 before losing the Super Bowl following the 2019 season to Kansas City.

He had two shots in 2020 but lost to Philadelphia in Week 4 and Seattle in Week 8.

Shanahan got back to 43-43 in his career in last season's playoffs before losing the NFC title game to the Rams. He also lost in Week 6 in Atlanta with a 46-46 record.

Shanahan has a long way to go to catch Hall of Famer Tom Landry, who didn't have a winning record with Dallas until his 11th season when the Cowboys beat the Giants in Week 2 of 1970 to improve his record to 70-69-2.