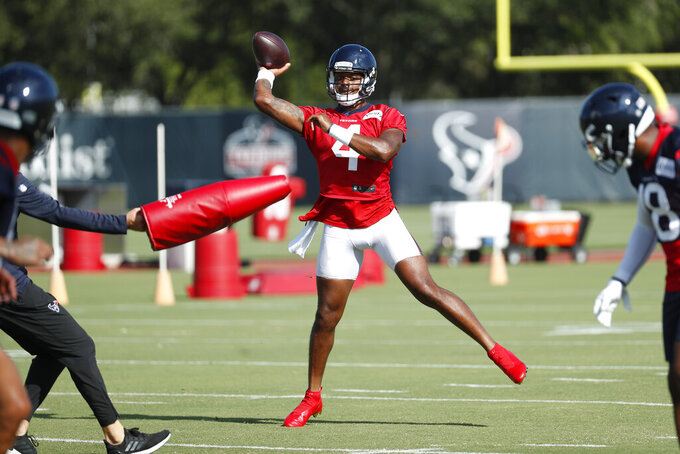 HOUSTON (AP) — Deshaun Watson has reached the pinnacle of success in both high school and college football.

Now the quarterback is focused on doing the same thing in the NFL with the Houston Texans.

The pressure is on the fourth-year player to help the Texans take a step forward this year after they squandered a huge lead against Kansas City in the divisional playoffs last season to miss making their first trip to the AFC title game.

He’ll have to do it with an offense that will have a different look after star receiver DeAndre Hopkins was traded to Arizona this offseason. That puts the onus on receiver Will Fuller to stay on the field for a full season after being plagued by injuries in each of his first four years in the NFL.

“If I can play 16 games, which I believe I will this year, the sky is the limit,” Fuller said. “I say the same thing all the time, when I’m out there, I just try to do my best to help the team win and wherever that lands me, stat-wise or whatever, at the send of the season, we’ll see when we get there.”

Watson knows reaching the big game is a tall task for this young franchise which has reached the second round of the playoffs four times only to come up short in each of those games.

“We’ve never won one here before and we haven’t even come on the brink of winning one,” Watson said. “We’ve got to get to that game before that, and then of course we can think about that. But yeah, I’m trying to create history and continue that and make it a dynasty.”

The Texans won’t have fans at their home opener against Baltimore on Sept. 20 because of the coronavirus. They haven’t yet decided if fans can attend later games and team officials say that will depend on the threat level of the virus in the city, which is currently at the highest level.

Defensive end J.J. Watt is looking forward to a big year after an offseason spent focused solely on working out and prepping for his 10th NFL season.

“The quarantine situation has given me literally nothing to do but work out every day,” he said. “There’s nothing else you can do ... it truly has been one of the best offseasons from a workout standpoint that I’ve ever had and I’m very, very pleased about it. My body feels as good as it’s felt since probably 2014, 2015, somewhere around there.”

The three-time NFL Defensive Player of the Year has played just one full season in the past four because of various injuries. He missed eight games last season after tearing a pectoral muscle in October but returned for the playoffs.

The Texans will get an early rematch with the Chiefs when they visit Kansas City on Sept. 10 to kick off the NFL season. Though the Texans deny that they’ll be thinking about last year’s playoffs in the opener, it will be hard to avoid memories of that 51-31 loss that came after they led 24-0 in the second quarter.

The Texans have a pair of tight ends that excelled at other sports before finding success in the NFL.

Darren Fells didn’t play football in college, instead starring for the basketball team at the University of California in Irvine before spending four years playing professionally overseas. Fells was signed by the Seahawks in 2013 but was released before the season. He played for the Cardinals, Lions and Browns before joining the Texans last year, where he set career highs in yards receiving (341) and touchdown receptions (seven).

Fellow tight end Jordan Akins also had a winding path to the NFL. Akins played both football and baseball in high school but put football on hold when he was drafted in the third round of the 2010 MLB draft by the Texas Rangers. He spent four years in their minor league system before giving up baseball to play football at UCF. Akins was drafted by the Texans in the third round in 2018 and he has appeared in every game since coming to Houston.

They are part of a group of tight ends that also includes Jordan Thomas and Kahale Warring. Watson raved about the talent at the position.

“Each one of those guys definitely can do a lot of different things,” he said. “They’re all very dynamic and can make big plays. They can help this team, help especially this offense, take it to a whole other level.”