Watt healthy and with Houston Texans for first day of camp 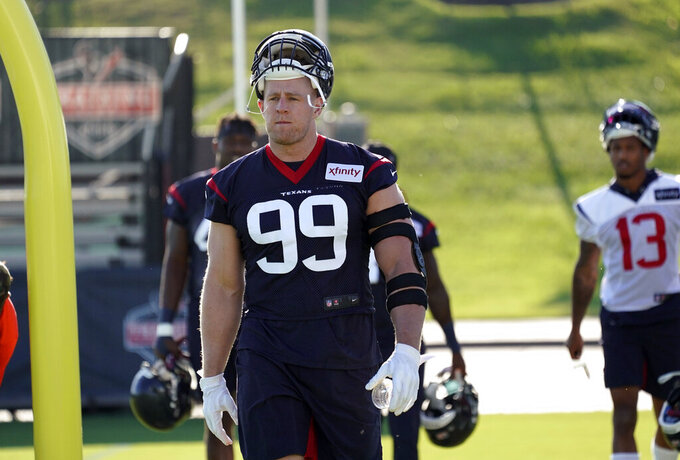 HOUSTON (AP) — J.J. Watt was thrilled to come off the physically unable to perform list on Thursday in time to join the Houston Texans for their first practice of training camp.

Quarterback Deshaun Watson didn't exactly share in his happiness after the three-time NFL Defensive Player of the Year batted down several of his passes.

Coach Bill O'Brien shared a similar sentiment as his quarterback when asked if he enjoyed having Watt out there.

"I guess so," O'Brien said. "He batted two passes. He was in the backfield quite a bit. So it was good to see him back there (but) from an offensive perspective, it's always hard when he's back in there because we're trying to execute the play ... but he's an awesome player. Great guy. A guy that's really put the time in in the offseason. And he's really looking forward to having a great year."

But all jokes aside, the Texans were pleased to have a healthy Watt on the field and he said he was initially placed on the list as a precaution before being removed when they determined he was ready to go on Thursday.

"We're going to be smart throughout camp," Watt said. "We'll have scheduled off days and things like that but my body feels great. I just told (trainer) Geoff Kaplan walking off that today went as good as I could have expected it to go. I'm really happy and pleased with how I performed."

And Watson eventually admitted that as frustrating as competing against Watt was on Thursday that it ended up being beneficial for him.

"I learned something about myself and using my eyes, not staring down defenders," Watson said. "That was one tip I took from today that he told me about was whenever he sees me looking that direction he stopped and he just kind of stood there and timed my jump. So I learned that lesson."

Watt returns after a comeback season where he earned All-Pro honors when he had 61 tackles, led the AFC with 16 sacks, had 25 quarterback hits, 18 tackles for losses and forced a career-high seven fumbles, which tied for the most in the NFL. It was his fourth season with at least 15 sacks, which ranks second in NFL history behind Hall of Famer Reggie White, who had five.

His big season came after he'd played just eight games over the previous two seasons because of injuries, and Watt was eager to see what he'll be able to do this year after a healthy offseason.

"It really excites me obviously," he said. "Last year I had an idea of what I wanted to accomplish and I hoped I could accomplish it but I wasn't 100 percent sure because I hadn't really played in a couple of years. So this year I have a lot of confidence. I have a lot of excitement and a lot of energy. I have a solid base where I know where I'm at whereas last year I was kind of feeling it out to see where I was at."

As Watt prepares for his ninth NFL season his expectations are high for both himself and this team which is looking to contend for its first title. But he knows that there's a long way to go until Houston opens the season on Sept. 9 in prime time against the Saints and that he and the Texans will have to prove they're contenders on the field.

While Watt was with the Texans on Thursday, the team remained without fellow defensive end Jadeveon Clowney, who has yet to sign his franchise tender after failing to get a long-term deal. Clowney is expected to miss all of training camp, but the Texans hope to have him back for the start of the season.

"I can tell you unequivocally that we want Jadeveon Clowney here," O'Brien said. "He's a part of this team. We want him here. There's always a difference when you're talking about money relative to wanting him on the team. That's something that the agent and our organization are working on, but ... we would love to have him here. He's a really talented football player that's made a lot of good plays for us in the past."