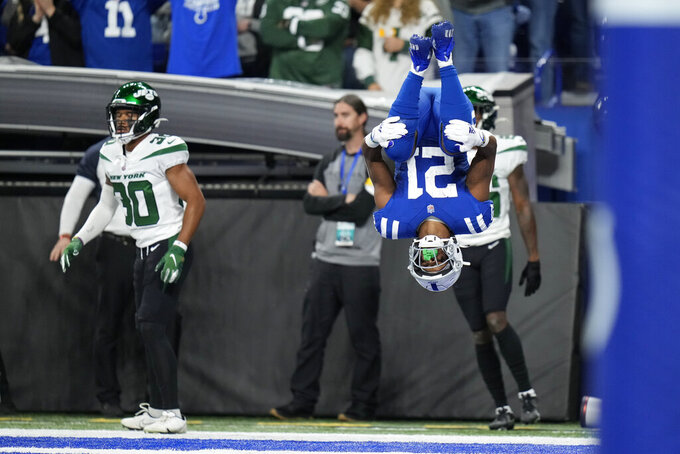 Indianapolis Colts' Nyheim Hines (21) celebrates after running for a touchdown during the first half of an NFL football game against the New York Jets, Thursday, Nov. 4, 2021, in Indianapolis. (AP Photo/AJ Mast)

INDIANAPOLIS (AP) — The Indianapolis Colts took a calculated risk by trading for Carson Wentz in March.

Halfway through the season, the move is paying big dividends.

Wentz has helped the Colts navigate their way from a 1-4 start back into the playoff picture with three wins in their last four games and his confidence appears to be growing by the week.

“He’s been playing a lot of good football," coach Frank Reich said after Indy steamrolled the New York Jets 45-30. “He had a couple things at the end of the last game but he was flawless (Thursday). He was stinkin’ flawless — except for the pass to Nyheim (Hines), which he should have hit that one. That was a bad throw."

Wentz hasn't been perfect, as two poor throws in the final 7 1/2 minutes against Tennessee attest. Those interceptions and that overtime loss could cost the Colts (4-5) a shot at the AFC South title.

There have been other bumps along the way. He was intercepted on a goal-line shovel pass to Jack Doyle in Week 2, a potentially decisive play in what turned out to be a 27-24 loss to the Los Angeles Rams. He couldn't quite close out what looked like an almost certain victory at Baltimore, though that was not entirely his fault.

But the stats and the game tape don't lie.

Despite limited offseason work with his new teammates, missing most of training camp because of foot surgery and spraining both ankles against the Rams, Wentz's completion percentage is back in the mid-60s. He's on pace for a career-high 4,152 yards in the league's first 17-game season, and he's thrown 17 TDs with three interceptions.

“I think we're making good progress, I think he’s making great progress," Reich said. “I think if before the year started and we took a poll and said: ‘Nine games into it Carson is going to have 17 TDs and three interceptions, would you take that?'

Wentz also is throwing more deep balls, an indication he and his receivers are increasingly working from the same page. Playing behind an offensive line that has steadily become healthier and stronger also has helped, and with Jonathan Taylor in contention for the league rushing title, Wentz has everything he needs to fulfill the potential scouts saw when he was the No. 2 overall draft pick in 2016.

All he has to do now is cash in.

“I am so encouraged by what I am seeing offensively and how we’re able to move the ball in so many different ways," Wentz said Thursday night. “Coach (Reich) does a tremendous job keeping defenses on their toes, and I look forward to more of that the second half of the season.”

Running game. Indy finished with a league-high 260 yards rushing against a run defense that was ranked No. 7. Taylor clearly has kicked it into high gear with four 100-yard games this season and a league-best streak of six straight games with 100 or more yards from scrimmage and a TD.

Pass rush. When the Colts struggle, it's largely because opposing quarterbacks have picked apart an injury-depleted secondary. Yes, staying healthy would help. So would more consistent pressure.

Hines. As Taylor delivers the highlights, Hines is the ideal complementary back. He had a nifty 34-yard TD run to start the scoring Thursday and finished with six carries for 74 yards while catching four passes for 34 yards. The Colts already rewarded Hines with a three-year contract extension.

Three-time Pro Bowl CB Xavier Rhodes has struggled this season in part because of injuries. A blown coverage led to the Jets' first score Thursday and it's not the first time he's been beaten this season. Indy needs the 31-year-old Rhodes to play better.

While the injury news has improved since an early rash, the Colts continue to take hits. Starting safety Kahri Willis (calf) is now on injured reserve, RT Braden Smith (triceps) and Rhodes (calf) did not finish Thursday's game. Reich had no updates Friday.

7 — The Colts are one of seven AFC teams with four wins and might need seven more wins to make the playoffs.

A second straight victory would put Indianapolis at .500 for the first time this season. The Colts have been playing better since their brutal five-game stretch to open the schedule. But to make the playoffs — and win in the postseason — they must start beating some playoff-caliber teams.