White making name for himself again as Jets' starting QB 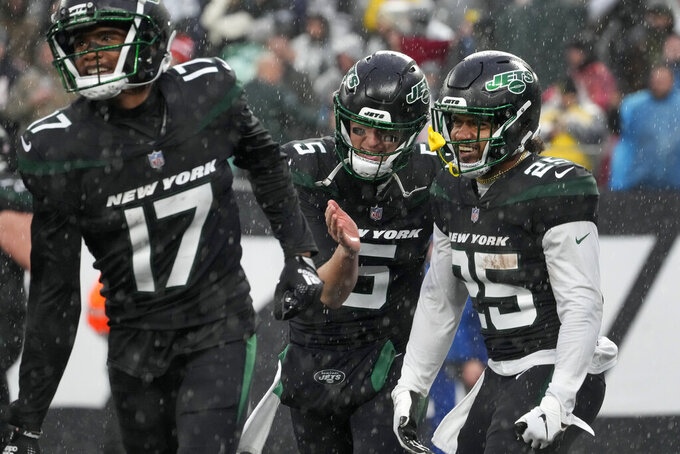 New York Jets running back Ty Johnson (25) and quarterback Mike White (5) celebrate after a touchdown by Johnson against the Chicago Bears during the third quarter of an NFL football game, Sunday, Nov. 27, 2022, in East Rutherford, N.J. (AP Photo/John Minchillo)

FLORHAM PARK, N.J. (AP) — Mike White was greeted by his wide-eyed twin toddlers when he finally got home to his apartment last Sunday.

They had no idea their father had put on a dazzling performance during which Jets fans chanted his name while he led New York to a victory a few hours earlier.

“That was cool,” a smiling White said, “having them run up to me and want to play.”

Mallory White was there and she watched and heard it all. So when she first saw her husband after the game, she couldn't help but blurt out the burning question:

“Who ARE you?” she asked jokingly.

Well, everyone is starting to find out all over again.

The former backup quarterback-turned-talk of the town is back in the headlines after stepping in for a benched Zach Wilson and helping the Jets beat the Chicago Bears 31-10.

White was 22 of 28 for 315 yards with three touchdowns, no interceptions and a near-perfect 149.3 quarterback rating in his season debut — with the drenched crowd at MetLife Stadium serenading him throughout with chants of “Mike! White!”

And this Sunday, he'll be under center in Minnesota leading a Jets team in the middle of the playoff hunt at 7-4.

“It is crazy,” White acknowledged. “But that's the NFL. It's me right now. I'm sure a couple years down the road, it'll be someone else. And you can go to another team and it's somebody else. That's the nature of the sport.”

But White is one of football's feel-good stories again, a little more than a year after his jersey and game ball made it to the Pro Football Hall of Fame following his NFL debut. In that Oct. 31, 2021, game against Cincinnati, White was playing for an injured Wilson when he threw three touchdown passes and completed 37 passes — an NFL record for a starting debut — in a 34-31 win.

White's moment in the spotlight was short, though.

He was injured in his next start at Indianapolis and then threw four interceptions in a blowout loss to Buffalo. He was replaced by Joe Flacco the next week and didn't take another snap in a regular-season game until last Sunday.

“I can play every play in that (Buffalo) game in my head over and over again way more than the Cincinnati game or even the last game,” White said, “just because I think that's when you learn the most when the games don't go so well.”

Offensive coordinator Mike LaFleur said White's reads in that loss were correct, but there were mechanical issues — his feet were in front of him a bit and his lower body was moving too fast.

“The problem I can get into is I am, luckily, able to process things pretty quickly,” White said. “It's just keeping my body in sync with how fast my brain is processing.”

So White worked on that when he went back to the bench. But when he came to training camp in the summer, something still wasn't quite right.

“I think he’ll be the first to admit that he was a little bit off to start camp,” coach Robert Saleh said.

So the coaching staff chatted with him — “a great conversation,” Saleh called it — laying out exactly what they needed to see from him moving forward.

Everything clicked again in the Jets' preseason finale against the Giants when White threw two touchdown passes.

“And then obviously just continuing to work and catch back up to make up ground for the slow start in training camp,” Saleh said. “And he's just been stacking it up.”

White began the season as the backup to Flacco while Wilson was out the first three games with a knee injury, but then dropped back to No. 3 when last year's No. 2 overall draft pick returned. It remained that way until late October when White was promoted to Wilson's backup.

Saleh explained the Jets wanted to see what they had in White if Wilson got hurt. But with Wilson underachieving and struggling with mechanical issues of his own, Saleh and the Jets decided to make White the starter last week.

While Saleh has said the Jets expect to play Wilson again this season, White can make a case for continuing to start the rest of the regular season — and perhaps even beyond.

“How I’m personally going to attack this is a week-by-week basis," White said. "Try to beat Minnesota this week, do it and have fun with my guys, preparing and going out there and performing. And once this week's over, we move on to whoever we have next week.

“I truly believe that's the only way you can play and that's how you kind of stay focused on the now."

White knows if he plays well, wins are likely to follow. And that's all the Jets are concerned with.

“I'll let the chips fall where they may after,” he said.

With those greetings at home always keeping White grounded.

“Whenever I'm in here, I'm Mike White the quarterback,” he said with a smile. "But whenever I go home, I'm just Millie and Maddox's dad.