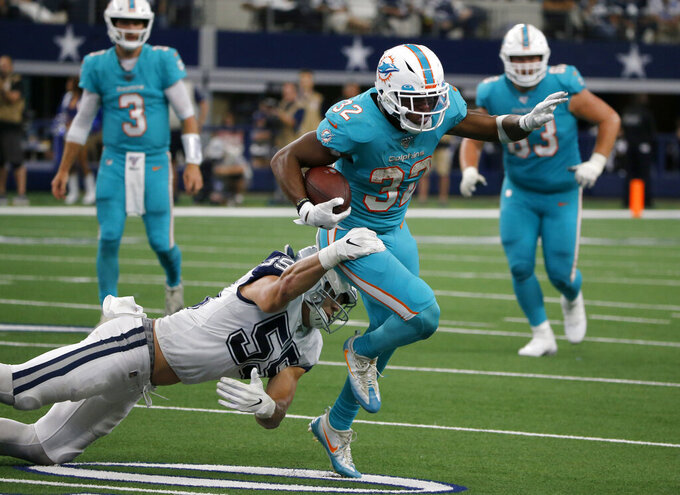 Dallas Cowboys outside linebacker Leighton Vander Esch (55) attempts to stop Miami Dolphins running back Kenyan Drake (32) from gaining extra yardage on a run in the second half of an NFL football game in Arlington, Texas, Sunday, Sept. 22, 2019. (AP Photo/Michael Ainsworth)

MIAMI (AP) — The Miami Dolphins' offensive line is a revolving door, and not just during games.

On the right side they're tried three starters who joined the team after the exhibition season. Two of them were quickly sidelined by injuries, and another injury last week forced third-round draft pick Michael Deiter to slide over from guard to left tackle, were he struggled.

No wonder the Dolphins rank last in the NFL in many offensive categories, including points. Quarterback Josh Rosen might be running for his life a lot again Sunday when Miami (0-3) faces the Los Angeles Chargers (1-2).

"Sooner or later I think we'll get some consistency going," Rosen said of his line. "We're just trying to find the best spots to put guys in."

That may take the rest of this season and beyond. Meanwhile, here are things to know about a game that has the team traveling 2,500 miles to kick off at 10 a.m. California time favored by 16½ points even though it hasn't won in Miami since January 1982:

The Dolphins have scored one touchdown and are on pace to total 85 points, which would shatter the record for fewest points in a 16-game season by Seattle, which scored 140 in 1992.

Miami has allowed 13 sacks and is averaging 2.6 yards per rush, both statistics a reflection of bad blocking. A lineup unsettled largely because of an ongoing roster purge hasn't helped.

"When it's always being shuffled around, the rhythm is a little bit off," Deiter said. "But if that's how it's going to be week to week, that's how it is. Whether it's people leaving or people getting hurt, football is super unpredictable. Whoever is out there, we have to make it work. It can't be an excuse not to play good football."

This week's question is whether the Chargers take advantage of the matchup; their line play has been a problem on both sides of the ball. A pass rush led by Joey Bosa and Melvin Ingram has totaled four sacks, while the offensive line is without injured left tackle Russell Okung, and Philip Rivers was sacked five times last week.

The Chargers have three defensive backs on injured reserve, including safeties Derwin James and Adrian Phillips. Undrafted rookie Roderick Teamer, who got the start at strong safety last week against Houston, had seven tackles but was exposed in coverage on a couple of occasions. Cornerback Brandon Facyson, a second-year undrafted player, also started last week.

The Chargers have allowed only three 300-yard passing games since the start of the 2017 season, but all three have been losses.

Chargers running back Melvin Gordon was moved to the active roster Saturday and is expected to play. Gordon ended his holdout Thursday after missing all of training camp.

Even though Gordon hasn't played a snap this season, the running game has not had a dropoff. Austin Ekeler leads AFC running backs in yards from scrimmage and Justin Jackson is averaging 7.9 yards per carry.

According to Inside Edge, Chargers running backs are averaging a league-best 6.5 yards from scrimmage per touch and 5.4 yards per carry, which is third best. The Dolphins are 2-14 when allowing 120 or more rushing yards since the start of the 2017 season, tied for fourth-worst in the league.

Undrafted rookie Preston Williams leads the Dolphins in catches and yards receiving with 11 for 155. He and Rosen have known each other since high school, when they met at an event for recruits in Oregon.

"We're just reuniting back here," Williams said. "It's pretty cool. We've got to get a little bit more chemistry down, a little bit more work together so we can just polish up some things. I feel like me and him will be real fine."

In last week's loss at Dallas, eight of the 12 passes Rosen threw to Williams fell incomplete, including a potential touchdown throw.

The Dolphins have gutted their roster and horded draft picks, and as a result they've been outscored by 117 points, the NFL's largest three-game differential since at least 1940.

But the race for the No. 1 choice could be close. Five other teams are also 0-5, and the Dolphins have five games against them.