WR Kenny Golladay returns to Giants lineup and gets benched 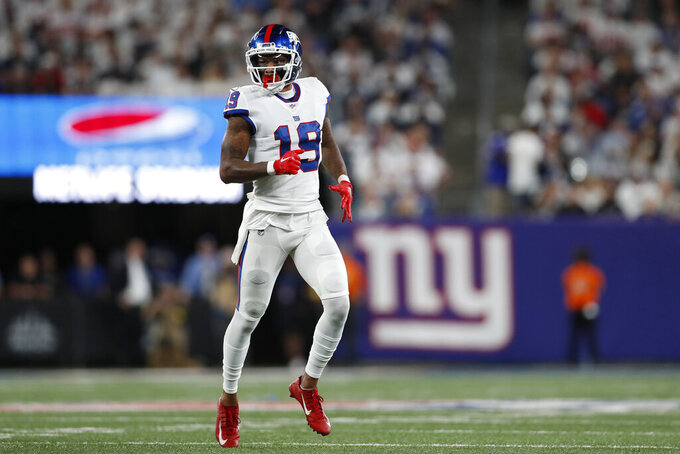 FILE - New York Giants wide receiver Kenny Golladay (19) in action during an NFL football game against the Dallas Cowboys, Monday, Sept. 26, 2022, in East Rutherford, N.J. Golladay is going to get another chance to show the New York Giants they didn't waste a lot of money last him as a free agent last year. Golladay expects to return to the lineup Sunday when the Giants (6-2) play host to the Houston Texans (1-6-1) at MetLife Stadium. (AP Photo/Steve Luciano, File)

EAST RUTHERFORD, N.J. (AP) — Wide receiver Kenny Golladay may have hit another low point in his career with the Giants on Sunday when he was benched for the second half of New York's 24-16 win over the Houston Texans.

There was some hope the 29-year-old veteran would start displaying some of the form that enticed the Giants to sign him to a four-year, $72 million contract in the spring of 2021.

His first season was a bust, with 37 catches and no touchdown. He had two receptions in his first four games this season before being sidelined for four weeks with a knee injury.

His comeback on Sunday was more than disappointing. He failed to come up with a very tough catch in front of the Houston bench in the first quarter, then flat-out dropped a roughly 5-yard pass from Daniel Jones late in the second quarter. It hit him right in the hands and the crowd at MetLife Stadium didn't hesitate to shower him with boos.

Golladay said it was just a drop. Most of his answers to questions about his struggles with the Giants were five words or less. He still has not caught a touchdown for New York.

Receivers coach Mike Groh told Golladay recent waiver pickup Isaiah Hodgins was going to replace him in the second half. Gollaway would not comment on whether he felt he should have been on the field.

“I'm going to keep pushing through,” Golladay said of his plans for the rest of the season.

Hodgins had two catches for 41 yards in the second half.

Golladay, who caught 11 touchdowns with Detroit in 2019, said he takes pride in his craft and he still believes he can be a dominant receiver. He said he is not hurt.

Golladay said his current situation is the biggest challenge of his career.

“You know, with all this going on. it’s definitely tough,” Golladay said.