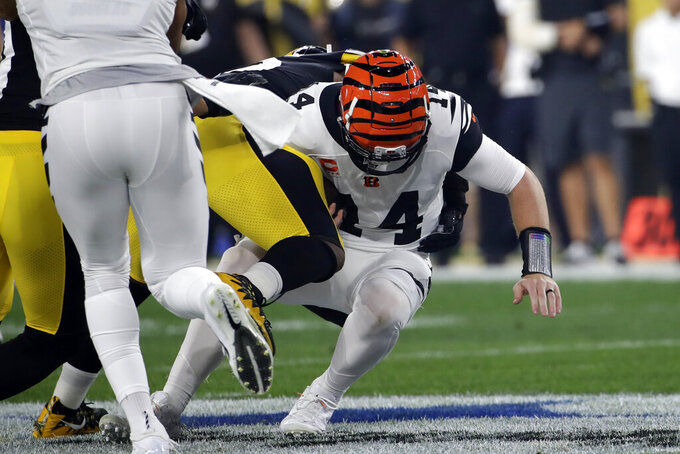 The Bengals went to Pittsburgh and got manhandled Monday night, a sight that had fans recalling all those bad moments in their lopsided Ohio River rivalry. Andy Dalton got sacked a career-high eight times — he barely had time to retreat from center on some plays — and the defense couldn't stop a pared-down passing game in Pittsburgh's 27-3 victory.

For the 0-4 Bengals, it's bad enough that September has come and gone without a win. The way they lost their latest one, however, eliminated any thoughts of an about-face under first year coach Zac Taylor.

And in the worst possible setting — a prime-time stage.

The Bengals fell to 6-16 in prime-time games since 2011, when Dalton was a rookie, including 2-6 on Monday night. They've now lost nine in a row and 12 of 13 against the Steelers, including that 18-16 playoff meltdown at Paul Brown Stadium that ended their 2015 season — their last one with a winning record.

The sight of Dalton getting swamped in the backfield was reminiscent of David Klingler getting sacked 10 times by the Steelers in 1992. Dalton was 21 of 37 for 171 yards with an interception in the end zone , a fumble on a sack, and 69 yards lost on those eight sacks. For perspective, the Bengals rushed for only 73 yards.

"We've got to figure out who we are," Dalton said.

Absolutely nothing. In addition to the horrid offense, the defense allowed Mason Rudolph to complete 24 of 28 for 229 yards and two touchdowns in a dump-it-off approach that Cincinnati couldn't stop. Also, there was another egregious coverage breakdown that left Diontae Johnson open for a 43-yard touchdown catch.

The offensive line took many steps backward in Pittsburgh, repeatedly beaten one-on-one . Guard Alex Redmond returns this week on a roster exemption after serving a four-game suspension for violating the league's policy on performance-enhancers. The Bengals also are hoping to get left tackle Cordy Glenn back soon — he sat out all four games with a concussion. But there's no quick fix to the biggest problem.

Few players had positive performances. Linebacker Nick Vigil led with 11 tackles, two of them for losses, and caused the fumble that set up the Bengals' field goal.

Taylor brought some fresh air to Paul Brown Stadium when he replaced Marvin Lewis, who was 0-7 in the playoffs during 16 seasons. The Bengals hoped that fans who had given up on the team would reconsider, but Taylor's energy and new offensive system haven't made a dent in the franchise's history of futility. Another lopsided loss to the Steelers drove home the point that in Cincinnati, it's always much bigger than the head coach.

Receiver John Ross III landed hard on his right shoulder and left the game. It's unclear whether he'll be sidelined by the injury. Receiver A.J. Green's status remains uncertain as he recovers from an ankle injury during training camp.

9 — The number of times that the Bengals have allowed at least eight sacks in a game. Four of those games came against the Steelers. Klingler's 10 sacks tied the club record during a 21-9 loss to the Steelers in 1992. Jeff Blake also was sacked 10 times in Pittsburgh in 1996.

Somehow get a win. The Bengals host another winless team, the 0-3-1 Cardinals, on Sunday, which represents their best chance for a while. Green's return will provide a boost, whenever that happens. They're 0-4 for the 11th time in franchise history and the eighth time in the past 29 years.