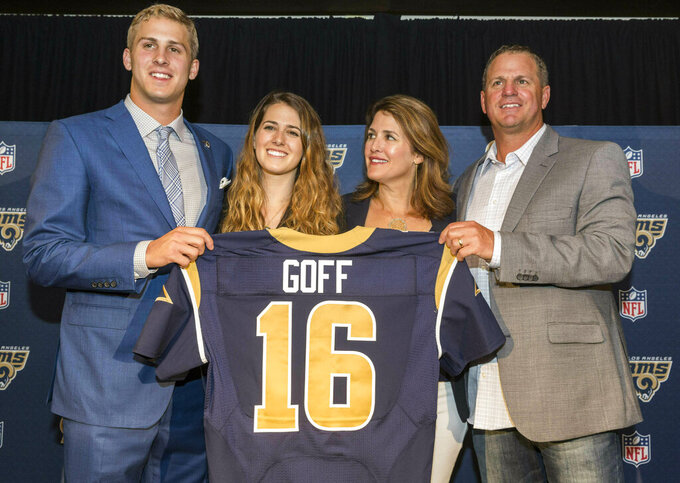 CORRECTS TO NANCY GOFF-File-This April 29, 2016, file photo shows California's Jared Goff posing for photos with his family after being selected by the Los Angeles Rams as the first pick in the first round of the NFL football draft, in Los Angeles. From left, Jared Goff with sister, Lauren Goff and parents, Nancy Goff and Jerry Goff. The Montreal Expos would be thrilled with this Super Bowl, and those who used to be part of the extinct baseball franchise’s evaluation process certainly are, even all these years later. Gone from the game for nearly 15 years, the former club has ties to both quarterbacks in Sunday’s NFL championship game. The Expos traded for Jared Goff’s father, Jerry, nearly three decades ago. Goff made his major league debut for Montreal in 1990 and played 55 games for the team as a backup catcher that year and in 1992.(AP Photo/Damian Dovarganes, File)

SAN FRANCISCO (AP) — The Montreal Expos would be thrilled with this Super Bowl. And those who used to be part of the defunct baseball franchise's evaluation process certainly are, even all these years later.

Gone from the game for nearly 15 years, the former club has ties to both quarterbacks in Sunday's NFL championship game.

The Expos traded for Jared Goff's father, Jerry, nearly three decades ago. Goff made his major league debut for Montreal in 1990 and played 55 games for the team as a backup catcher that year and in 1992.

Just a few years later, Montreal drafted another catcher from Northern California, making Tom Brady an 18th-round choice before he decided to stick with football.

"I could have ruined the history of the NFL," former Expos scout John Hughes said with a chuckle, considering what might have been had Brady chosen baseball. "I love it when he goes to the Super Bowl."

Both John Hughes and another former Expos scout, Gary Hughes (no relation) are downright giddy about the game in Atlanta, if not just a little bit torn because they're thrilled for both quarterbacks.

Gary Hughes helped acquire Jerry Goff in 1990 from Seattle and is a fellow graduate, along with Brady, of Serra High School in San Mateo, California. Hughes had yet to fully ponder the pairing when he received a timely text message from a Red Sox scouting colleague.

Hard to argue that one.

"I got a kick out of it. He was right on top of that," Gary Hughes said.

Gary Hughes, with 52 years in baseball, was working as Marlins scouting director when he evaluated Brady playing baseball for Serra. Before that, Hughes worked as a Bay Area-based Western cross checker for the Yankees when New York drafted Jerry Goff in the 12th round in 1984 out of College of Marin. Later, after Goff was drafted again by the Mariners in the 1986 third round out of the University of California in Berkeley, Hughes was scouting director of the Expos. He watched Goff play Double-A ball in Seattle's farm system before acquiring the left-handed hitting backstop.

John Hughes was the Expos' Northern California area scout when he pushed for Brady.

"As long as Gary doesn't take credit for drafting him," John Hughes said of his scouting colleague and friend.

John Hughes also worked 12 years on the Cal staff as a pitching coach and had Jerry Goff on the team in Berkeley.

The connections run even deeper for Gary Hughes. He taught P.E. and English and served as athletic director during nine years working at Marin Catholic High, where Jared Goff starred.

Jerry Goff worked as a firefighter in suburban Millbrae, where one of Hughes' best friends had been chief, the late scout Dickie Hanlon.

"There's a family feel to it. Jerry went to the College of Marin Hall of Fame. At the same time so did a friend of mine, the first traveling secretary for the Florida Marlins, John 'The Greek' Panagakis, who was the College of Marin basketball coach," Gary Hughes recalled.

Just after the Expos selected Brady, he came out to Candlestick Park with Montreal in town to play the Giants. He seemed comfortable in the clubhouse, with John Hughes noting, "He looked like he belonged in the locker room."

That didn't end up meaning much. Brady took a football scholarship to play at Michigan.

The rest is history.

"Based upon the way we kind of went about our business and followed him throughout the course of the summer, we obviously felt that he had a career and had a future in baseball. He was an 18th-round draft choice, but he only went in the 18th round because we knew that he had football hanging over his head and that was probably what he was going to do," John Hughes said. "So the quote/unquote sign-ability was going to be very difficult if at all. I don't know that we ever really truly officially got to the point where we made a pure offer to him just because we never got close to what it would take to sign him. But we viewed him as a guy that had a chance to be an everyday major league catcher. He had a strong arm, he was a left-handed hitter, and he had some power. He was a solid receiver. In a lot of ways it's kind of what you see now: He was a good athlete, not a great athlete, but he had incredible field presence and was highly competitive, and he commanded his teammates' attention as a leader behind the plate."

Back when he was watching Brady the catcher, Gary Hughes had no idea what the young man would become in football.

"I thought he might sign for baseball. I didn't know he was going to become Tom Brady," Gary Hughes said. "He had great size and athletic ability. I saw him play one game, but I cross-checked him and I could see why he certainly was draftable. I didn't know he had so much going for him in football."

Despite his relationship with Jerry Goff and having watched Jared play a handful of times in high school, Gary Hughes insists he has no choice but to cheer for Brady on Super Bowl Sunday.

"I've got to go with blue and gold, Serra High," Gary Hughes said. "It's got everything to do with the blue and gold."

Then he added: "And that's not the blue and gold of the Rams."