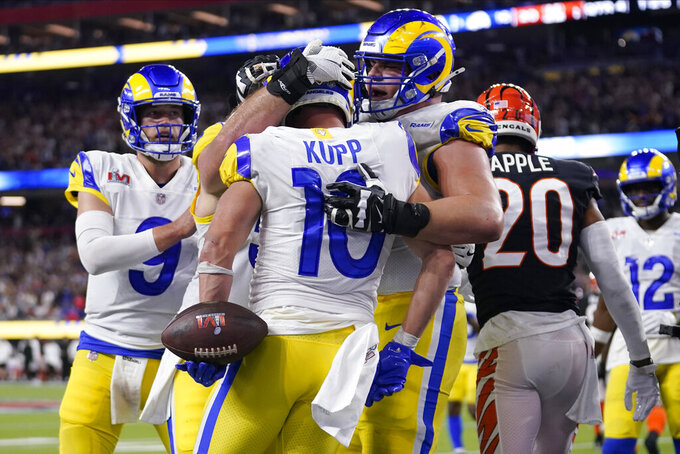 Los Angeles Rams wide receiver Cooper Kupp (10) is congratulated by teammates after scoring a touchdown against the Cincinnati Bengals during the second half of the NFL Super Bowl 56 football game Sunday, Feb. 13, 2022, in Inglewood, Calif. (AP Photo/Marcio Jose Sanchez)

INGLEWOOD, Calif. (AP) — A sea of yellow flags flew onto the field in the final two minutes with the Super Bowl at stake.

After the Los Angeles Rams and Cincinnati Bengals were flagged only twice in the first 58 minutes, penalties on three consecutive plays helped determine a champion.

Matthew Stafford tossed a 1-yard touchdown pass to Cooper Kupp for the go-ahead score following three straight penalties on Cincinnati’s defense, and the Rams’ defense held on for a 23-20 victory Sunday.

“Crunch time, they got flag happy and it put us in a bad situation,” Bengals cornerback Mike Hilton said. “But we can’t blame it on them. We just have to find ways to win.”

The Bengals were the second-least penalized team in the league and had the fewest penalty yards.

But when it mattered most, the calls went against them.

“We pride ourselves on being a very disciplined team and that was a very, very undisciplined moment and it is frustrating," Bengals coach Zac Taylor said.

The barrage of flags started on third down from the 8 with 1:47 left when Stafford’s pass to Kupp was incomplete. However, a questionable holding call on Bengals linebacker Logan Wilson gave the Rams a first down at the 4.

“They got down to the red zone on third down and Logan made a hell of a play I thought on Cooper Kupp and the penalty flag comes throwing out," Bengals cornerback Chidobe Awuzie said. "Obviously, I’m not a ref, I don’t know what happened on that play.”

On the next play, Stafford tossed a 4-yard TD pass to Kupp but the play was nullified by offsetting penalties. Rams right tackle Rob Havenstein held and Bengals safety Vonn Bell was called for unnecessary roughness for a hard hit on Kupp.

“Well, there’s some things that are out of our control. Just a couple judgment calls there," Bengals defensive end Trey Hendrickson said.

Stafford threw incomplete to Kupp in the end zone on the next play, but a pass interference on Eli Apple put the ball at the 1.

“Both (defensive backs) on both sides were grabbing, a little pull here and there and the first three quarters they were fine with it,” Hilton said. “It’s part of the game. We can’t control if they are going to call it or not.”

After Stafford got stuffed on a sneak, he tossed a 1-yard TD pass to Kupp.

Joe Burrow had 1:25 to lead Cincinnati into field-goal range, but the Bengals failed on three attempts to get 1 yard from the Rams 49.

For most of the game, the officials let the teams play.

“They should have just let it play out how they were doing the whole game,” Bengals wide receiver Tyler Boyd said.

It appeared they even missed a penalty that would’ve negated Burrow’s 75-yard TD pass to Tee Higgins on the first play of the second half. Higgins beat Jalen Ramsey to give the Bengals a 17-13 lead, but he got away with grabbing the All-Pro cornerback’s facemask and spinning his head around before making the catch.

“Our rule is that if there is a grab and twist and turn, there’s enough for a foul. If there’s just a rake across the facemask, where there’s not a twist and turn even if there’s a grab, there is no foul," referee Ronald Torbert told a pool reporter. "The officials did not see any contact that rose to the level of a foul for a 15-yard facemask.”

The turning point for Los Angeles came after falling behind 20-13. The Rams and their ferocious defensive line sacked Burrow four times over the next 11 plays.

Burrow went down seven times, six in the second half. Aaron Donald and Von Miller each had two sacks.

“They have a really good front,” Burrow said. “Aaron Donald, Von Miller, Leonard Floyd are three of the best payers in the league. We expected pressure and they did a good job.”