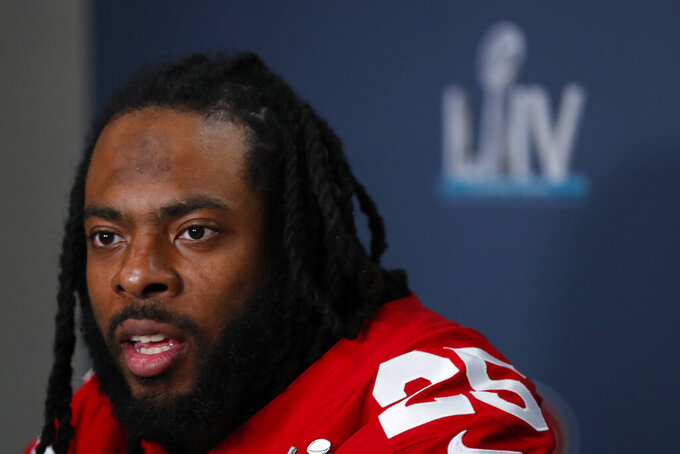 FILE - In this Jan. 30, 2020 file photo San Francisco 49ers cornerback Richard Sherman speaks during a media availability in Miami, for the NFL Super Bowl 54 football game against the Kansas City Chiefs. Sherman is calling on the NFL to go beyond commissioner Roger Goodell's statement condemning racism. Sherman said, Wednesday, June 10, 2020, the league needs to do a better job hiring minorities in coaching and front office positions and also be vigilant about calling out racism whenever it arises. (AP Photo/Wilfredo Lee, file)

But the San Francisco 49ers' star cornerback called on the league to do a lot more that just talk in the coming weeks and years to confront a problem that hasn’t gone away despite years of protest by players.

“I think having some people of color represented in the general manager space, the front office space, obviously head coaches, that would go a long way,” Sherman said Wednesday. “They’ve tried their best to throw money behind it for a long time. It takes more than that. It takes you literally calling out bigotry and being motivated. It’s not just pleading. It’s being consistent year in and year out that you’re combating this issue and that this is a problem that needs to change. And it’s not just this year, not just 2016, not just 2017, but ‘Black Lives Matter.’ They have to matter forever. They have to matter every year.”

The NFL currently has only four minority head coaches and just two minority general managers among its 32 teams.

Sherman said he believes the outrage among players in the league and people in the country following the death in police custody of George Floyd, an unarmed black man in Minneapolis, is far different than it was in 2016 when former Niners quarterback Colin Kaepernick started kneeling during the national anthem to highlight the problems of police brutality and racism.

Several other players throughout the league joined Kaepernick in protest in 2016 and many continued it the following season even when Kaepernick was out of the league.

Sherman was not one of the players who chose to protest by kneeling, feeling it gave people an excuse to move the focus to patriotism instead of racism.

“They found a way to dull down that message and to divert it and make it about something else in a way to avoid the conversation,” he said of the critics. “I think this time, it’s too full-fledged and most people are actually getting the messaging and seeing it firsthand. Nobody can turn their eyes away, nobody can turn away from what they’re seeing. Any human with any true empathy in them for their fellow human being would feel that it’s wrong.”

Kaepernick paid a price for his stance. He opted out of his contract with San Francisco the following year after the new regime led by coach Kyle Shanahan and general manager John Lynch told him they planned to cut him and go a different direction.

Kaepernick hasn’t gotten another offer from an NFL team since. He settled a collusion case with the NFL but still hasn’t gotten a chance to earn another job in the league despite having led the Niners to the Super Bowl following the 2012 season and the NFC title game the following year.

“That’s a question that will be up to you asking Roger Goodell or these owners who haven’t employed him,” Sherman said. “We don’t employ people. I can want him to have a job and I can think he deserves the job as much as anybody. Everybody said it because he’s a good player. He showed he can play in this league and play at the highest level. He deserves a job but in order to answer those questions I have to be one of the decision makers who can give him a job. I’m not that person. I think that until those people are asked those difficult questions we’ll never get the answers.”

Sherman praised the Niners for how they have responded to the issue. CEO Jed York recently announced a donation of $1 million to organizations designed to create change.

Lynch and Shanahan have discussed the current events with the players during virtual meetings the past few weeks.

“A lot has been made about them throwing money at the issue but I think there’s a lot more at the foundational level that has been done by not only our coaching staff but our players, our front office, our ownership, to really make a difference and make a change in this world,” Sherman said.