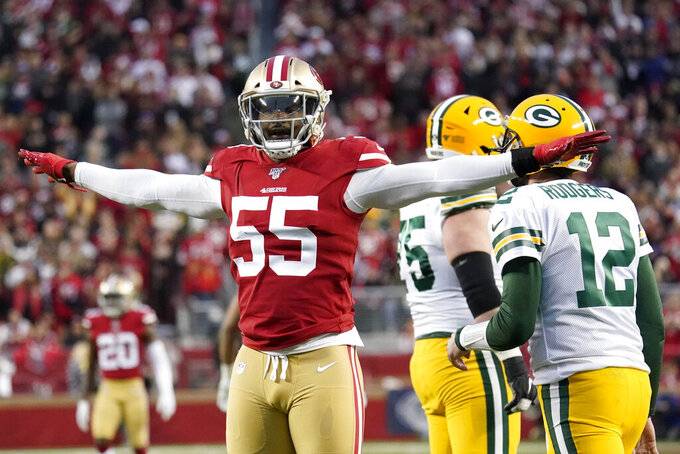 San Francisco edge rusher Dee Ford had an “extensive cleanup” operation for the tendinitis in his left knee that limited his effectiveness in his first season with the 49ers.

Ford said Friday that Dr. James Andrews performed the operation a few weeks after San Francisco lost the Super Bowl and that he feels in much better condition heading into his second year with the Niners after playing with what he described as a “blown tire” for most of last season.

“I’m confident moving forward,” Ford said. “I feel great right now. I’m able to actually explode off of this knee. Thinking back on it, I can’t believe I played a whole season on it. We knew at the end of the day, what we had to do, had to be surgical. But I didn’t want to miss the season. We had too much going on. I didn’t want to miss that. It’s in the bag now. I’m confident in that.”

Ford was a key acquisition last season for the Niners, who traded a second-round pick to Kansas City for the edge rusher and then gave him a five-year, $85 million contract.

Ford missed most of his first training camp with the Niners after having an injection in the knee. He returned to play 40 snaps in the opener but hurt the knee again in Week 2 at Cincinnati and didn’t play more than 26 snaps again in a game until the postseason.

He played only four snaps the final six games of the regular season because of a hamstring injury.

That was a far cry from the previous season when Ford averaged nearly 63 defensive snaps a game for the Chiefs and had the second most of any front-seven player in the regular and postseason combined.

Even after the surgery, the 29-year-old Ford knows he will still likely have to deal with the knee problems for the future.

“Anytime you’re dealing with a chronic issue, you’re always on the clock,” he said. “I know exactly what I felt like last year. Doing the things that I’m doing now is like night and day. We’ll just play it by ear once everything gets going. We haven’t really had an offseason. No one’s really been in competition. It’s just hard to measure exactly where we’re at. We’re just going to keep taking it one day at a time and just keep getting this thing as strong as I could possibly get it so we can sack some quarterbacks.”

Ford was able to do that last year when he was on the field. Despite being on the field for only 151 pass rush snaps, Ford still recorded 6 1/2 sacks for the highest rate in the league among players with at least 100 rushes.

Ford also played a key role in transforming San Francisco’s defense by freeing up rookie Nick Bosa and Arik Armstead for pressure opportunities. The Niners finished tied for fifth in the league with 48 sacks and sixth with 27 takeaways a year after having only 37 sacks and generating a record-low seven takeaways.

San Francisco’s pressure rate jumps from 22.7% when Ford isn’t on the field to 34.2% when he is playing, according to NFL NextGen stats, a sign of his importance.

But that production wasn’t enough to help Ford be part of a championship team despite coming agonizingly close two years in a row. His offsides penalty in the AFC championship game following the 2018 season helped fuel New England’s comeback win that eliminated the Chiefs.

He then was part of a San Francisco team that had a 10-point lead in the fourth quarter of the Super Bowl against Kansas City before falling apart late in a 31-20 loss.

“I said it before, even before I got to San Francisco, that if I was to dwell on things that had happened in the past, I wouldn’t be any good in the future in helping my team get back,” Ford said. “It’s the same thing this year. We can’t dwell on the loss. You got to use that to push forward and be even better, which we are going to be. We’ll be even better next year. Because now we’re going to have to face another narrative of just having that hiccup season after the Super Bowl. The fight continues.”