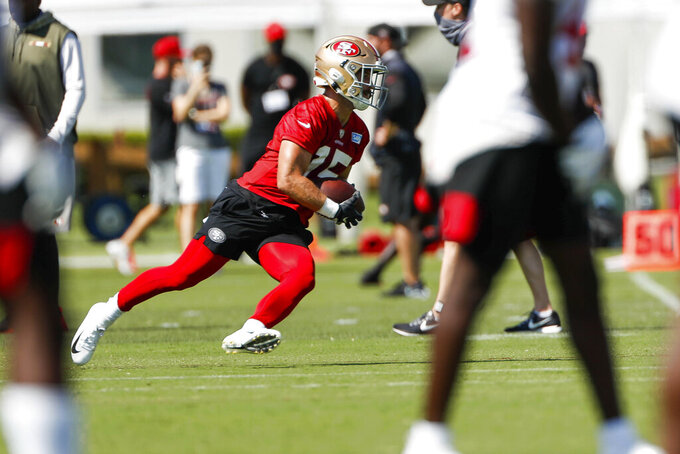 SANTA CLARA, Calif. (AP) — San Francisco 49ers receiver Jalen Hurd went down with a knee injury that likely will sideline him for the season.

Coach Kyle Shanahan said Monday that he believes the injury Hurd suffered the previous day in practice is a torn ACL.

Hurd missed all his rookie season with a back injury but was being counted on to contribute this season before being dealt another setback.

“It was a pretty unfortunate thing for him,” Shanahan said. "We know what he went through last year with his back and the guy has worked as hard as anyone on our team to get back. For him to get hurt before he actually got to go out there and just a freak thing on air, cutting. I really felt bad for the guy, but he’ll be back next year.”

Hurd was one of three key players on offense who missed last season with injuries for the defending NFC champion Niners but were expected to return this year.

Running back Jerick McKinnon and slot receiver Trent Taylor have had much better luck so far this summer and participated in their first padded practice Monday.

“It is one of the things that you kind of want to put behind you,” McKinnon said about his injuries. “It was a dark time. I found myself in a dark place at moments. But I’m past that point. I’m here to play football. I’m here to get better each and every day. I’m here to compete. That’s the main focus to compete. Win the day, stack the days and keep moving.”

McKinnon was expected to be a key piece with his ability as a big-play running back and as a receiving option out of the backfield when he signed as a free agent with the 49ers in 2018.

But he tore his ACL the week before the opener his first season and missed that entire year. The knee kept bothering him last summer in training camp and McKinnon missed another full season as the Niners paid him $15.5 million the past two seasons without ever seeing him on the field.

“You could tell it just didn’t heal right and then he had to go through all that stuff again,” Shanahan said. “It’s still the first day, the first step, but you can tell that it healed right and you can tell Jet’s put that work in and you feel all this that he’s gone through in the last two years. I feel he’s finally in a position where he has a chance to have this comeback now and everyone’s pulling for him.”

McKinnon showed some flashes in his first four seasons as mostly a backup in Minnesota. He rushed for 1,918 yards and also caught 142 passes.

That talent led the Niners to target him as the perfect back for Shanahan’s system and McKinnon looked like a perfect fit during his first training camp. That’s why it’s so encouraging to the Niners that he looks healthy again.

“You would never guess that this guy hasn’t been on the field for two years,” fullback Kyle Juszczyk said. “He just makes things look so natural, so smooth that I think there can only be positive things for him this year. I think he’s going to have a really good year.”

The 49ers can only imagine what kind of impact a healthy McKinnon can make on the offense. They know how important a piece Taylor can be when healthy.

Taylor had 17 of his 43 catches as a rookie in 2017 during the five games Jimmy Garoppolo started as he became the quarterback’s most trusted receiver out of the slot.

Taylor was slowed in 2018 by offseason back surgery and then missed all of last season because of a broken foot that required five surgeries because of an infection.

“It’s been a tough road, just going through last season with my infection, not even being able to go to most of the games,” Taylor said. “Just sitting in my 800-square-foot apartment all season long. It wasn’t fun. But that’s part of the game. It’s part of life. You just got to be able to take the punches as they come and keep rolling. I look at it as a great time for me to grow. I think I learned a lot about myself through all those situations that I went through. I think I grew a lot from it.”

With Emmanuel Sanders gone in free agency and Deebo Samuel recovering this summer from his own broken foot, Taylor becomes an even more important player.

San Francisco has only two other healthy receivers on the roster who have ever caught a pass in a game from Garoppolo in Kendrick Bourne and Dante Pettis.