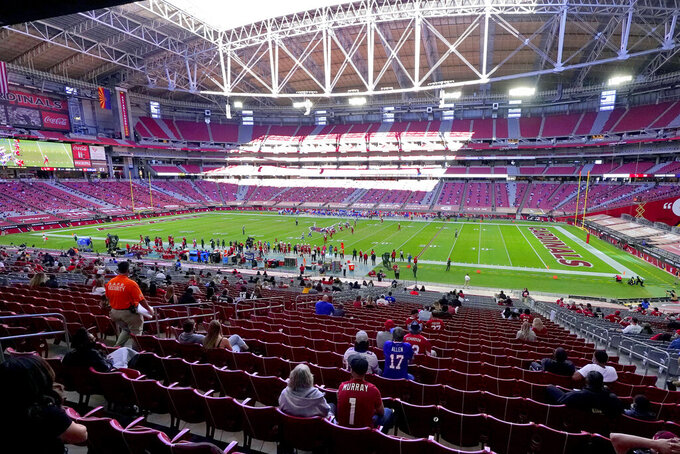 FILE - In this Sunday, Nov. 15, 2020, file photo, the Buffalo Bills and the Arizona Cardinals compete during the first half of an NFL football game in Glendale, Ariz. The San Francisco 49ers are set to embark on an unusual three-week road trip after being kicked out of their stadium and practice facility because of strict new COVID-19 protocols in their home county in Northern California. The Niners will fly to Arizona, where they will practice, live and play their next two games after Santa Clara County imposed a three-week ban on games and practices for contact sports. (AP Photo/Ross D. Franklin, File)

The San Francisco 49ers will finish out the regular season practicing and playing home games in Arizona after a ban on contact sorts in their home county was extended into January.

The Niners relocated to Arizona at the beginning of December after Santa Clara County announced a three-week ban on contact sports games and practices to help slow the spread of the coronavirus. That ban was initially supposed to be lifted on Dec. 21 but now has been extended until at least Jan. 8, meaning San Francisco’s home game Jan. 3 against Seattle will be played in Arizona.

The 49ers were expecting to be forced to stay in Arizona for the rest of the season and made plans for many families of players, coaches and staff to join them next week for Christmas.

“The day we were made to leave, we pretty much assumed that would happen,” coach Kyle Shanahan said Friday. “That’s why we made the decision earlier. We weren’t going to wait for something we knew was inevitable. We’ve been planning on getting our families down and I know not everyone can do it, but anyone who can get it, we’re getting our families down. I know mine’s coming tomorrow and they’ll go through a testing service. So, as long as that goes well, I know I personally will be able to see them Sunday night. And, I think a lot of people are in the same boat.”

The 49ers arrived in Arizona on Dec. 2 and began practicing the next day. The team is staying at a hotel near the Arizona Cardinals stadium in Glendale, where they are playing their home games. There also are practice fields close by, keeping the team in a contained area.

After winning at Los Angeles against the Rams in their final game before relocating, the Niners (5-8) have lost twice at their new home to Buffalo and Washington the past two weeks to put a major dent in their playoff chances.

“I thought we had a chance to really start going, getting better each week and after that Rams game, since we’ve come here, I think we’ve taken two steps back,” Shanahan said. “I haven’t really thought at all about playoffs. I haven’t thought about three games. It’s important to me that we play better. There’s a certain standard that we expect. No matter what your excuses are, I know we can play better than we have these last two weeks and that’s really all I’ve talked about.”

San Francisco travels to Dallas on Sunday before playing a road game on Dec. 26 against the Cardinals in the stadium the teams are currently sharing. The Week 17 game against the Seahawks wraps up the schedule.

NOTES: WR Deebo Samuel (hamstring) and OL Hroniss Grasu (knee) are out this week. ... LB Fred Warner (stinger), CB Emmanuel Moseley (hamstring) and CB K’Waun Williams (ankle) are questionable. ... RB Raheem Mostert will play despite an ankle injury and TE George Kittle won’t be activated from IR until next week at the earliest.

By Wayne Parry 20 minutes ago
By Tom Withers an hour ago
By Josh Dubow 3 hrs ago
4 hrs ago
By Teresa M. Walker 6 hrs ago