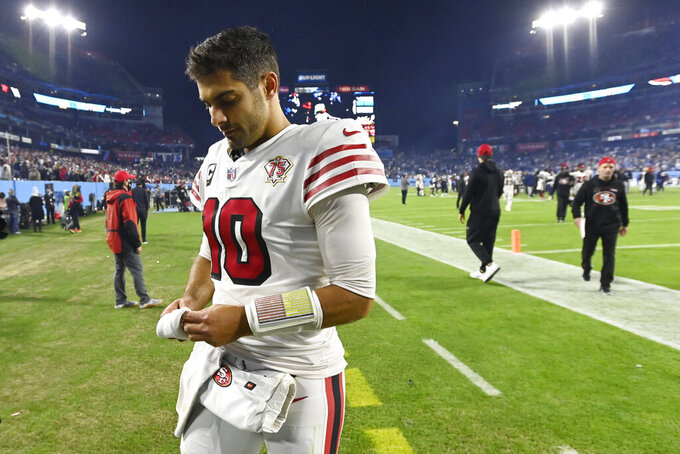 Jimmy Garoppolo won't need surgery on his injured right thumb despite a chip of the bone and a torn ligament.

It remains unclear if he will be able to start at quarterback for the San Francisco 49ers this week.

Garoppolo played through the injury during a loss last Thursday night at Tennessee and planned to test out the thumb on Wednesday in hopes he would be able to play for the 49ers (8-7) on Sunday against Houston when they have a chance to clinch a playoff spot.

“Christmas made it feel a little better, I’ll say," Garoppolo said. "It’s a torn ligament though, so it is what it is. Kind of the pain, it’s not going anywhere, so I know what that feels like. But it’s just about being confident, going out there and being able to do what I normally do with the football. We’ll see where it gets us, but I feel good right now with it.”

Garoppolo got hurt on a sack in the second quarter but remained in the game. He said the injured thumb played a role in his second interception of the game on San Francisco's opening drive of the third quarter, but he was able to adjust his throwing motion to cope with it.

Garoppolo completed 5 of 7 passes for 91 yards on a tying touchdown drive late in the game before the Niners lost 20-17.

“I played the entire game with it basically, so it’s really just about being able to grip the ball, do the things I normally do,” he said. "We’re going to go test this out today, see how it feels and go from there. But I feel confident in it.”

Garoppolo didn't disclose the injury in his postgame news conference because he wanted to keep the focus on the team. Coach Kyle Shanahan then said Monday that Garoppolo sprained his thumb. On Wednesday, Shanahan confirmed reports there also was a small fracture, but the bigger issue remains the sprain.

“The reason they never mentioned to me a fracture is because that really didn’t have much to do with it,” he said. "On the third-degree sprain that he has on his UCL ligament, when that is ripped up, it pulled off a little fleck of his bone. When there’s a bone that has anything off of it, you can call it a fracture, you can call it a chip, you can call it something, but that really isn’t what’s keeping him out. It’s the third-degree sprain that he has. But because it’s not moving he doesn’t need surgery and he has a chance to play this week.”

If Garoppolo is unable to play, rookie Trey Lance would get his second start of the season. The Niners traded three first-round picks to draft Lance third overall in April, but Lance has only played five snaps in garbage time since starting in Week 5 at Arizona.

“He’s been preparing like he’s going to start every week," Shanahan said. "He’s excited because he sees early in the week that he has a possibility of starting and he gets to definitely start at practice today. So I know he’s excited about that, but his routine is the same.”

“John’s first class, always has been and always will be. I’m sure he didn’t do it on purpose,” Garoppolo said. “Whatever social media mistake, stuff happens. I trust John and he’s been nothing but good to me since I’ve been here. I don’t see him changing anytime soon.”