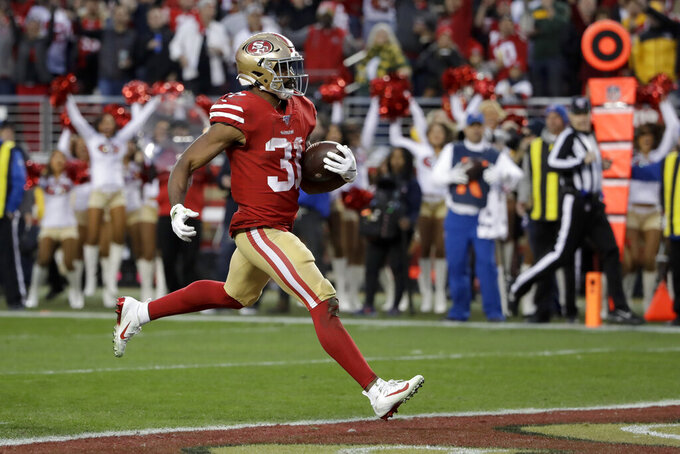 MIAMI (AP) — Raheem Mostert froze as the menacing fin sliced through the ocean surface just 2 feet from his surfboard.

It was a shark.

The San Francisco 49ers running back was 16 at the time and in trouble in the waters off New Smyrna Beach, Florida - the “Shark Bite Capital of the World.” As the shark's fin slowly bobbed, Mostert's mind raced with fear and he whipped his head around to find his surfing buddies.

“I had my legs in the water and I looked at my friends and they were like, 'Raheem, whatever you do, don’t panic.’” Mostert recalled. “The only thing I could do at the time was pick my feet up and just sit on the board and balance.”

Until, eventually, the curious shark swam away.

Then, Mostert could breathe — and surf — again.

“That’s really the first time I ever experienced an encounter with a shark,” he said with a smile.

And, it wouldn't be the last.

There would be two or three more anxious moments in the water over the next few years. But, Mostert can proudly say, without any shark bites.

See, that's why tackle-hungry defensive linemen and linebackers are no sweat for the now 27-year-old Mostert. He has been dodging danger since he was a kid.

In the water, and sometimes in the neighborhood.

The breakout star of the NFC championship game with 220 yards rushing — the second-most in NFL postseason history — and four touchdowns against Green Bay would head to the ocean when things got too hectic. Even with the sharks stealthily swimming around in there.

“Surfing was very important simply because it helped me get away from, you know, the stuff that was on the inland,” said Mostert, who partnered with Ocean Conservancy this season to support ocean health for the “My Cause My Cleats” campaign.

“Getting away, being in the ocean," he added, "the tranquility, the peace, yeah, it was just like a getaway for me.”

Skateboarding was actually Mostert's first passion, regularly rolling through the streets and trying to perfect his wheelies and tricks — and constantly bouncing back up for more whenever he'd fall.

“I loved it,” he said. “We used to have a skate park down in New Smyrna. Actually, two of them. They built a new one once I left. And, yeah, I went back and started to go out skateboarding a couple of times on a half-pipe. So that was pretty fun.”

But living in a beach town 30 minutes south of Daytona that had a reputation for being a prime surfing area, the ocean called to him.

So, Mostert went from skateboards to surfboards. From sloping ramps to breaking waves.

And for all the amateur surfers out there, Mostert feels you. He has been there, too, with that first experience seared in his memory.

“Not fun,” a laughing Mostert recalled of that moment. “Just trying to catch a wave and me not knowing how to necessarily balance on a board yet, I’d be more in front of the board and I’d take a nosedive right into the sandbar. That was a rough time.”

Through all the wipeouts, cuts and bruises, Mostert got back on the board. And kept going.

He had gotten the hang of it just four months later and considered himself “really good at it.” So good, actually, he was even offered a professional surfing sponsorship deal.

Mostert's childhood athletic background helped him navigate his way from the beaches to the high school football fields of Florida all the way to Purdue, where he was a lightning-fast running back and kick returner who also ran for the track and field squad.

“His strides are just so smooth,” 49ers fullback Kyle Juszczyk said, “something I would picture a guy who’s good in the water would look like.”

Despite his success for the Boilermakers, Mostert went undrafted in 2015 and signed with Philadelphia as a free agent.

That was merely the first stop on his NFL journey, which has become a popular storyline during the week at the Super Bowl. He keeps a list on his phone of all the teams that cut him — six in 18 months — as constant motivation.

Once he got to San Francisco in 2016, though, Mostert had finally found a football home.

“It's incredible,” tight end George Kittle said. "The guy could have been surfing. ... He never gave up. He keeps grinding every single day. He attacks it every single day. When he finally gets his opportunity, he just sprints at people's faces.”

Mostert led the 49ers with 772 yards rushing and eight touchdowns during the regular season — success he can trace back to his surfing and skateboarding days back home.

“The balance part really helped because if you’re catching a wave or something like that, you really have to bend your knees and use your toes to grip the board and use all the wax and stuff like that,” Mostert said. "The same thing with skateboarding. ... You fall off the board, you’re bleeding and you get little scars and whatever.

“It’s just like life - you want to get right back up and fight.”

As a condition of the contract extension he signed with San Francisco last March, Mostert can't do any actual surfing because of the risk of injury. But, he still honors his past when he scores a touchdown by paddling on the turf and then pretending to ride a wave on a board.

And, he'd love nothing more than to hang 10 in the end zone Sunday at the Super Bowl.