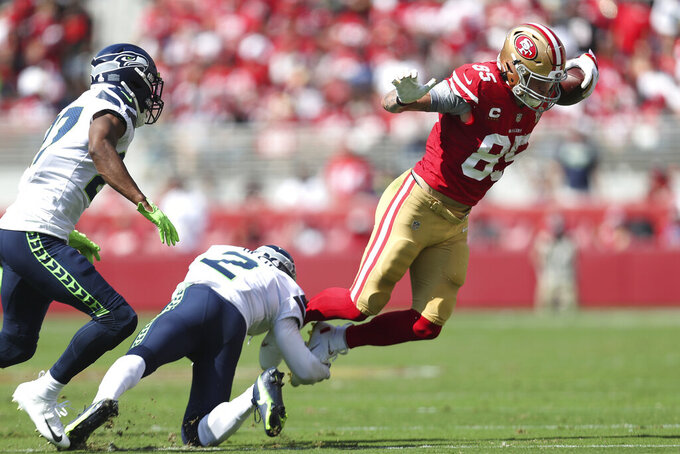 SANTA CLARA, Calif. (AP) — The San Francisco 49ers placed star tight end George Kittle on injured reserve Saturday with a calf injury that has been bothering him for weeks.

Kittle played through the injury last week but was unable to practice at all this week. The Niners decided to shut him down for at least the next three games in hopes he can be completely healed for the second half of the season.

Kittle will be eligible to return on Nov. 7 when the Niners host Arizona.

This is the third straight year Kittle has missed time with injuries. He missed two games in 2019 with a knee injury and eight games last season with injuries to his knee and foot.

Kittle has 19 catches for 227 yards in four games this season. His 283 career catches since being drafted in the fifth round in 2017 are third-most for any tight end in that span, and he ranks second to Kansas City's Travis Kelce with 3,806 yards receiving.

The move with Kittle means the Niners (2-2) will be without one of their top playmakers and starting quarterback Jimmy Garoppolo when they play the undefeated Cardinals on Sunday.

Rookie Trey Lance will start at quarterback in place of Garoppolo, who is also sidelined with a calf injury.

San Francisco activated Nate Sudfeld from the practice for Sunday's game to serve as Lance's backup. Tight end Tanner Hudson also was elevated to the active roster for the game.

The Niners also promoted receiver Travis Benjamin from the practice squad to take Kittle's spot on the active roster.