49ers prepared to deal with challenges of extended trip 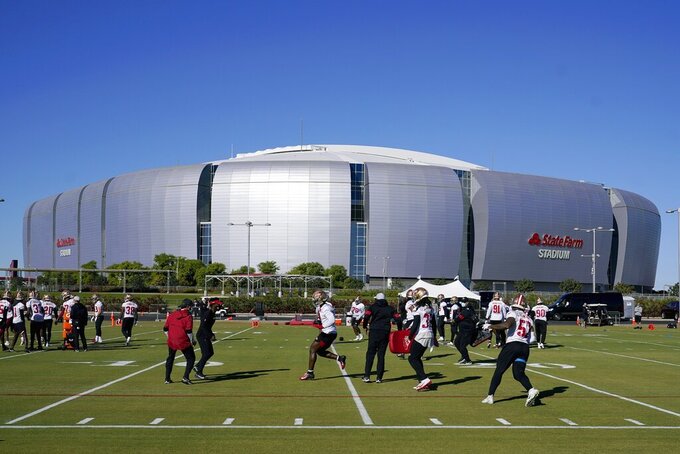 The San Francisco 49ers NFL football team defensive unit runs drills during practice in front of State Farm Stadium, home of the Arizona Cardinals, Thursday, Dec. 3, 2020, in Glendale, Ariz. The 49ers start a three-week road trip after being forced from their stadium and practice facility because of strict new COVID-19 protocols in their home county in Northern California. (AP Photo/Ross D. Franklin)

When the San Francisco 49ers arrived at their temporary home in Arizona, coach Kyle Shanahan gathered several players and told them to make sure everyone is looking out for each other.

As important as practice, game plans and preparations are for the playoff-hopeful 49ers, Shanahan is also concerned about the mental wellbeing of his players, who have left their families for at least three weeks after strict new COVID-19 protocols in their home county prohibited games and practices for contact sports until at least Dec. 21.

“I just try to tell everyone, no matter what, when someone has a problem, whatever it is, there’s no problem too big or too small,” Shanahan said. “A lot of guys keep that stuff internally, but I met with a bunch of the players and I grabbed about 20 of them last night and just told them to look out for that stuff. ... It’s just understanding that it’s human nature. Some stuff’s going to come up over the next three weeks and no one ignore it. Just always bring it to someone’s attention because the worst thing you could be in these situations is feel kind of alone on an island and we’ve got a big group going through it, so we can rally together and make sure we help each other through it.”

Shanahan said the team doesn’t have a “woe is me” mentality during this time but understands it is a challenge. The Niners learned they would have to leave town Saturday as they were boarding a flight to Los Angeles to take on the Rams.

Santa Clara County announced the new protocols that essentially shut down the team facility in a move that caught the players and coaches off guard. The Niners (5-6) went on to beat the Rams 23-20 to remain in the playoff hunt, returned home to the Bay Area and then put together the plan to practice and play their next two home games at the Cardinals stadium in Arizona, starting with Monday night’s game against the Buffalo Bills.

San Francisco will take on Washington the following week and then head to Dallas for a road game, practicing the whole time in Arizona. It’s possible they could return home after that game on Dec. 20, but there are no assurances of when the new rules will be lifted so they might need to finish the season on the road.

“Once we got the news, we’re going to Arizona and then you just pack your bags and go,” quarterback Nick Mullens said. “You just roll with it. It’s kind of the mentality of the team, roll with it, do the work, work hard, focus on what matters and that’s beating the Bills and we’ve kind of just been going with it. And so, we’re here.”

The Niners are pleased with the setup that director of team logistics Steve Risser and team logistics manager Mike Slap helped put together in Arizona. The team is staying at a hotel adjacent to State Farm Stadium, where they will play the next two games.

They have set up a weight room and converted a 15,000-square-foot ballroom into a temporary locker room so the players can change at the hotel before going to the practice fields next to the stadium. The players will almost exclusively spend their time at the hotel, practice field and stadium, where they will have everything they need and won’t need to venture into the community.

“The weight room and training room, everything is outstanding,” linebacker Fred Warner said. “It’s actually really nice having everything in the same place. Everything is here at the hotel where we’re staying. So you just wake up, you have your virtual meetings and everything’s right here where you need, your meals and so on and so forth. They made it very seamless in the transition.”

NOTES: WR Deebo Samuel was held out of practice for routine maintenance because of a hamstring injury that sidelined him for three games earlier this season. ... CB K’Waun Williams (ankle) also missed practice and won’t play this week. ... The Niners took TE Daniel Helm off the COVID-19 list and released him from the practice squad.