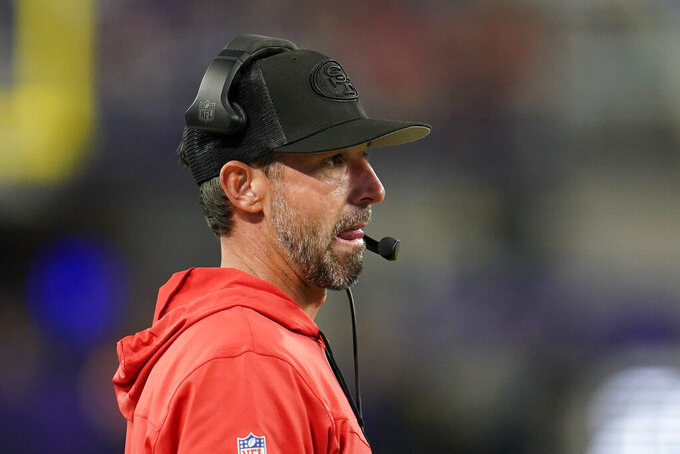 San Francisco 49ers head coach Kyle Shanahan watches from the sideline during the second half of a preseason NFL football game against the Minnesota Vikings, Saturday, Aug. 20, 2022, in Minneapolis. (AP Photo/Abbie Parr)

SANTA CLARA, Calif. (AP) — The defense looks dominant, the offensive line is anchored by the best left tackle in the game and the offense features several players with game-breaking ability.

All of the pieces are in place for the San Francisco 49ers to build on last season's run to the NFC title game as long as untested quarterback Trey Lance is up to the job.

“I think he’s in the best position he could be in as a first-year quarterback with a defense like us, a good O-line and a bunch of weapons,” star defensive end Nick Bosa said. “I think if he doesn’t make big mistakes, we’re going to be in good shape.”

The Niners have been building to this moment ever since they traded three first-round picks to draft Lance third overall out of North Dakota State of the FCS in 2021. Lance spent his rookie year mostly on the bench behind Jimmy Garoppolo but has been handed over the reins to the offense this season.

If things go as planned, Lance's athleticism and big-play ability will open up aspects of the offense that weren't there when the more limited Garoppolo was the starter.

But Lance's teammates want him to know he has plenty of support and doesn't need to try to do too much.

“It’s not like a situation where you bring in a young guy and the team is in disarray and the quarterback has to do so much to really help you win games,” defensive lineman Arik Armstead said. “It’s just him coming in and doing his job, which he has handled well.”

The story in San Francisco on offense last year was the emergence of receiver Deebo Samuel, who gained 1,770 yards from scrimmage and scored 14 TDs as a dual-threat player capable of winning as a receiver out wide or as a running back out of the backfield.

Samuel spent most of the offseason away from practice in search of a new contract. He put to rest any speculation that he wouldn't want coach Kyle Shanahan to use him as a runner as much this year.

“At the end of the day, it's whatever it takes,” Samuel said. "I’m pretty good with the ball in my hands and he figured out ways to do it. We just excelled and then week by week it just got better.”

The main question for the 49ers comes on the interior of the offense line after left guard Laken Tomlinson left in free agency, center Alex Mack retired and right guard Daniel Brunskill was viewed as a stopgap. San Francisco looks ready to hand those three jobs to players who have played only 11 offensive snaps in the NFL the past three seasons.

Last year's second-round pick Aaron Banks is slated to start at left guard after barely getting on the field as a rookie, while fourth-rounder Spencer Burford from Texas-San Antonio appears to have won the right guard spot. Jake Brendel looks like he will start at center despite making only three starts since entering the NFL in 2016.

The situation at tackle is much better, with All-Pro Trent Williams anchoring the left side and Mike McGlinchey returning from a quadriceps injury on the right side.

The Niners are excited to see what Bosa can do after a full offseason of workouts. He missed most of training camp as a rookie in 2019 with an ankle injury, was limited by COVID-19 in 2020 and was rehabbing a knee injury last summer. He spent this offseason working out and honing his pass-rushing skills after recording 15 1/2 sacks and could take another step this season.

“He’s one of the best I’ve ever seen,” defensive coordinator DeMeco Ryans said. “Just the way he works and the way he shows up and makes plays, he makes it look easy. I know it’s not easy.”

The biggest offseason addition came at cornerback, where the Niners brought in Charvarius Ward from Kansas City with a three-year, $40.5 million contract. Ward has upgraded what had been the weakest spot on the defense with his strong press coverage skills, which San Francisco hopes will lead to more takeaways.

“A pure lockdown corner. I’ll go through an entire practice and I won’t hear anything about him," linebacker Fred Warner said. “That’s great because that means he’s locking his side down. You don’t really notice him because they don’t want to throw to his side.”

The Niners get a soft opening with a trip to Chicago and a home game vs. Seattle in the first two weeks. Then they play two games against the Rams in a difficult October that also includes a home game vs. Kansas City and a 10-day stay on the East Coast between games at Carolina and Atlanta. After traveling to Mexico City for a “road” game against Arizona before Thanksgiving, the Niners don't leave the Pacific Time Zone for the final seven games.