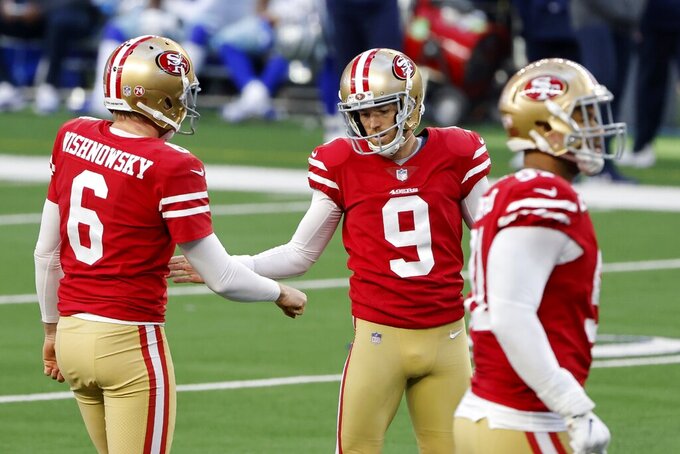 San Francisco 49ers' Mitch Wishnowsky (6) and Robbie Gould (9) celebrate a field goal kicked by Wishnowsky in the second half of an NFL football game against the Dallas Cowboys in Arlington, Texas, Sunday, Dec. 20, 2020. (AP Photo/Michael Ainsworth)

The San Francisco 49ers locked up their kicker for the next two seasons and found one for this week.

The Niners signed Robbie Gould to a renegotiated contract that keeps him on the team through 2022 with a guaranteed contract at a reduced rate from his current deal. Gould was also placed on the COVID-19 list Wednesday and will miss the season finale against Seattle.

“It was great to lock up Robbie,” coach Kyle Shanahan said. “I didn’t feel like we were going to lose him, so I’m just glad we were able to work out something that helped both sides, helps the organization and is good for Robbie, too. So, I think we all felt real good about that.”

The 49ers still needed a kicker for this week and signed Tristan Vizcaino, who had spent time on Minnesota’s practice squad this season. Vizcaino is expected to clear coronavirus protocols in time to practice on Friday.

The Niners also will have a change at long snapper with Taybor Pepper on the COVID-19 list. Colin Holba was signed to take his place.

The 49ers faced a Saturday deadline to exercise an option on the final two years of a four-year, $19 million contract Gould signed before last season. The new deal will give Gould a guaranteed $7.25 million the next two seasons, according to ESPN, but save the team money on the tight 2021 salary cap.

It also takes one task off the offseason to-do list for the Niners (6-9), who hope to rebound following a difficult 2020 season.

“You need a kicker and you want a good one and we have a kicker and we have a good one,” Shanahan said. “You have to make all those decisions financially that affect every other one, but if you decide to move on from a good kicker like Robbie, you’ve got to be willing to get worse or spend close to the same money to try to stay the same. So, that’s, to me, a pretty easy decision."

The 38-year-old Gould made 19 of 23 field goals and 36 of 38 extra points this season. He had been extremely accurate before faltering last week with a missed extra point and two field goals in a 20-12 win over Arizona.