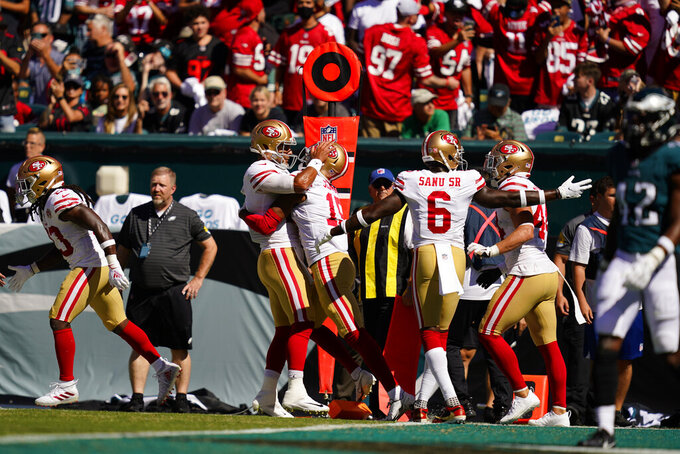 San Francisco 49ers wide receiver Jauan Jennings (15) celebrates his touchdown with teammates during the first half of an NFL football game against the Philadelphia Eagles on Sunday, Sept. 19, 2021, in Philadelphia. (AP Photo/Matt Slocum)

Perhaps most importantly for the 49ers, it included two wins after they overcame a shaky start in a 17-11 victory over the Philadelphia Eagles on Sunday.

“It’s games like this where you find a way and you get a win before you head back home on an away trip,” defensive end Nick Bosa said. "That’s what propels you to a great season I think. Hopefully that’s the case, and we’re going to keep on working.”

For the second time in three years the 49ers (2-0) opened the season with back-to-back road wins in the Eastern Time Zone. That fast start in 2019 helped propel San Francisco to the Super Bowl, and the Niners are hoping for a similar performance this season.

Just like in 2019, the 49ers stayed back East between games, practicing last week at The Greenbrier resort in West Virginia as they recovered from losing cornerback Jason Verrett and running back Raheem Mostert to season-ending knee injuries and linebacker Dre Greenlaw (groin) for at least a month.

After almost collapsing late in a 41-33 win at Detroit in the opener, the Niners started slow in Philadelphia with three-and-outs on the first three possessions for the first time in five seasons under Kyle Shanahan.

But a blocked field goal and a goal-line stand kept it close, and Jimmy Garoppolo led a pair of TD drives that both were longer than 90 yards — the first time San Francisco did that in a game since 1992.

“That is the NFL for you man," Garoppolo said. "It is never going to be easy. Some weeks easier than others, but even last week it came down to the wire at one point. When you can win different ways like that, it makes for a good team. I have been around this league for a little while now, and teams that can win different ways, whether it's offense, defense, special teams stepping up, that makes for a good team.”

Bosa. Any questions about how Bosa would return from ACL surgery have been answered in the first two games. Bosa had two sacks against Jalen Hurts and forced a fumble, giving him three sacks on the season as he once again looks like the player who won Defensive Rookie of the Year in 2019.

Downfield passing. Garoppolo had a career-low average depth of pass with his average attempt traveling just 3.8 yards downfield. Garoppolo was 19 for 23 for 117 yards and a TD on throws less than 10 yards downfield and 3 for 7 for 72 yards on throws that traveled at least 11 yards.

Deebo Samuel. Samuel had six catches for 93 yards and clearly looks like Garoppolo's top target early this season. His 282 yards receiving are the second-most in the Super Bowl era through two games for the 49ers, trailing only Jerry Rice's 285 in 1989.

Day 1 and 2 draft picks. The Niners got almost nothing out of their four picks from the top three rounds in this year's draft. No. 3 overall pick Trey Lance didn't get in at all after getting four snaps in the opener. Second-round pick Aaron Banks was a healthy scratch for a second straight week, while third-rounder Ambry Thomas was also scratched. Third-round running back Trey Sermon was active after being scratched last week, but he had only one carry for 8 yards on his only snap before leaving with a concussion.

The Niners are banged up at running back with Sermon in concussion protocol, Elijah Mitchell day to day with a shoulder inury and JaMycal Hasty out for a while with an ankle injury. San Francisco has Kerryon Johnson on the practice squad and is bringing in Lamar Miller, Duke Johnson and T.J. Yeldon in for a workout. ... Defensive tackle Kevin Givens also will miss time with an ankle injury.

8. For the eighth straight game, the 49ers failed to score on the opening drive. They have four three-and-outs, two other punts, a fourth-down stop and a fumble in that span. That’s their longest opening-drive drought since an 11-gamer in 2007-08.

The 49ers host the Packers in their home opener on Sunday night. San Francisco has lost its past two home games after returning from a two-game trip East.