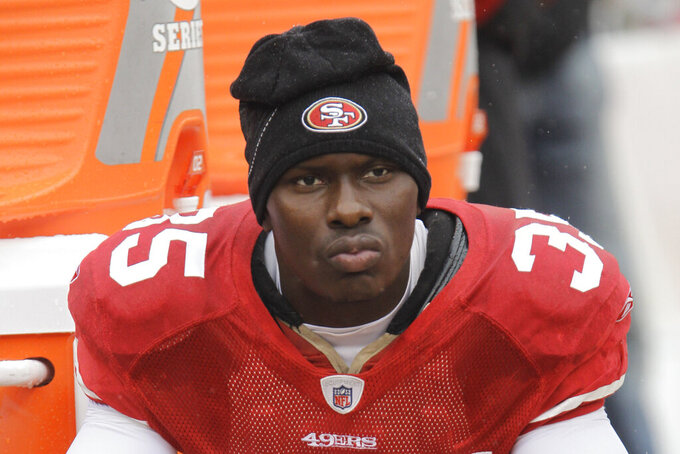 FILE - In this Oct. 17, 2010 file photo, San Francisco 49ers cornerback Phillip Adams (35) sits on the sideline during the first quarter of an NFL football game in San Francisco. A source briefed on a mass killing in South Carolina says the gunman who killed multiple people, including a prominent doctor, was the former NFL pro. The source said that Adams shot himself to death early Thursday, April 8, 2021. (AP Photo/Paul Sakuma, File)

Phillip Adams was a journeyman NFL player whose career was cut short by injuries, a disappointment that apparently stuck with him during his post-football life.

The 32-year-old Adams fatally shot five people — including a doctor, his wife and their two grandchildren — before later killing himself, authorities in Rock Hill, South Carolina, said Thursday.

“He had an injury his rookie year,” Adams' agent, Scott Casterline, told The Associated Press. “Some teams wrote him off and he had that stigma of a guy who was hurt. His ability was better than a guy who bounced around a lot. All that weighed on him heavily. He had (six) years, a great career, but he felt he had more. It was hard for him to walk away from the game, especially a guy as dedicated as he was.

Adams played in 78 NFL games over six seasons for six teams. He joined the 49ers in 2010 as a seventh-round draft pick out of South Carolina State, and though he rarely started, he went on to play for New England, Seattle, Oakland and the New York Jets before finishing his career with the Atlanta Falcons in 2015.

As a rookie late in the 2010 season, Adams suffered a severe left ankle injury that required surgery that included several screws being inserted into his leg. He never played for the 49ers again, getting released just before the 2011 season began. Later, with the Raiders, he had two concussions over three games in 2012.

Former Cowboys cornerback Kevin Smith trained with Adams leading up to the 2010 draft and after he entered the league. Both Smith and Casterline said Adams opened a smoothie and juice store before the coronavirus pandemic hit. Both emphasized how much Adams trained, even overworked. They said he didn’t drink or do drugs. Smith mentioned he liked fast cars and drove too fast.

“I used to have to tell him you don’t have to do so much,” Smith said. “I would tell him it’s about preserving your body because he’d want to work out three times a day.

“This is just shocking. Recently, our only communication was through Instagram and he was real short. He didn’t say a whole lot. That was just him. He was such a good kid. I didn’t see mental issues outside of the fact that his pride was a double-edged sword. What drove him, all the hard work, also worked against him.”

Both the NFL and NFL Players Association have myriad post-career programs for players that include physical and mental care. Citing confidentiality, the league and union could not provide specifics on whether Adams took advantage of those programs.

“This is so unlike him,” a shaken Casterline said. “He had to not be in his right mind, obviously. All of us who knew Phillip are shaking our heads. He struggled away from the game. I tried to get him to come to Texas. I was going to find him a job, but he wouldn’t leave South Carolina because he had a son. He was a good father. Seeing Phillip shoot two kids, it’s not him. I can’t fathom it. It’s devastating for the victims and the families.”

Earlier this month, Adams was convicted on traffic charges, including driving under a suspended license and failure to maintain proof of insurance.

Making an NFL roster as a seventh-round draftee (224th overall) is not easy, and Adams found a role with most of his teams. He never came close to stardom, though.

“I can say he’s a good kid — he was a good kid, and I think the football messed him up,” his father, Alonzo Adams, told WCNC-TV. “He didn’t talk much and he didn’t bother nobody.”