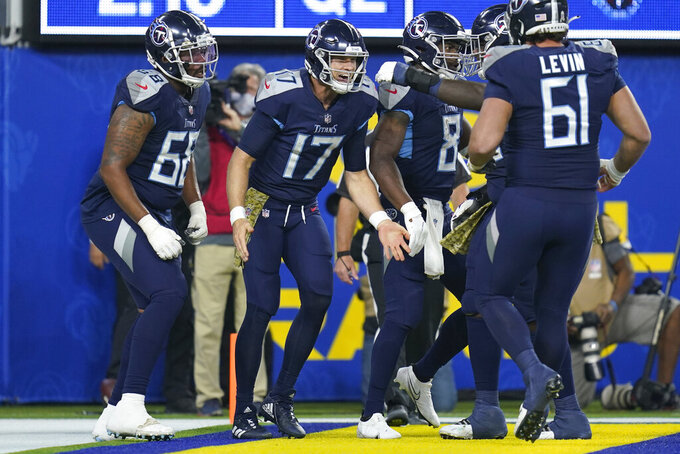 Tennessee Titans quarterback Ryan Tannehill, center, reacts after scoring a touchdown during the first half of an NFL football game against the Los Angeles Rams, Sunday, Nov. 7, 2021, in Inglewood, Calif. (AP Photo/Ashley Landis)

BETTING LINE: Titans by 3, according to FanDuel SportsBook.

TURNOVER DIFFERENTIAL: Saints plus-6; Titans plus-1.

SAINTS PLAYER TO WATCH: DE Cameron Jordan has a sack in each of his past three games and has been New Orleans’ top pass rusher for most of the past decade.

TITANS PLAYER TO WATCH: QB Ryan Tannehill. With Derrick Henry on injured reserve, Tannehill is their top rusher averaging 6.7 yards per carry with four TD runs. Only Justin Fields of Chicago has been sacked more than Tannehill (27).

KEY MATCHUP: The Saints rank first in run defense, allowing 73.8 yards per game, and have only gotten better since DT David Onyemata returned from his six-game suspension to start the season. The Titans are still working through their run game after losing Henry to a broken foot, but throwing with Tannehill seems smart with the Saints 27th in yards passing allowed per game. New Orleans has given up at least 340 yards in each of the past two games to Tom Brady and Matt Ryan.

KEY INJURIES: Saints safety C.J. Gardner-Johnson is dealing with a right foot injury, and RB Alvin Kamara did not practice Wednesday with a knee problem. Titans RG Nate Davis is back practicing working through the concussion protocol. Titans LT Taylor Lewan (knee) is limited after not playing last week, and OLB Harold Landry is dealing with a hamstring issue.

SERIES NOTES: This game is a direct result of the NFL expanding to a 17-game season. The Saints are the defending NFC South champs, while the Titans won the AFC South in 2020. The Saints have won two of the past three games in this series, including a 38-28 win in their last visit to Nashville. Henry was held out of that game. The NFL rushing leader currently is on injured reserve.

STATS AND STUFF: The Saints are 4-1 in games played outside the Superdome this season, including their home-away-from-home opener against Green Bay in Jacksonville in a game moved because of Hurricane Ida. ... The Titans are 6-0 this season against 2020 playoff teams, including four straight coming into this game. ... Tennessee has won five straight, the longest active streak in the NFL, and sits atop the AFC. ... The Titans are 11-4 vs. NFC teams since Mike Vrabel was hired as coach in 2018. ... Only one of the Saints’ three losses have come by more than six points. They led inside the final minute of the fourth quarter in their losses to both the New York Giants and Atlanta. ... QB Trevor Siemian has passed for 408 yards and three TDs without an interception since taking over for injured Jameis Winston in the second quarter of a Week 8 victory vs. Tampa Bay. ... QB Taysom Hill completed both of his passes for 33 yards in a reserve role last week. Hill went 3-1 in four starts last season. ... Kamara has 358 career receptions, tied with Roger Craig for most by a running back in his first five seasons. ... RB Mark Ingram ranks second among active players in yards rushing yards (7,688) and third in TDs rushing (63). Ingram needs 20 yards rushing to become the Saints' franchise rushing leader, surpassing Deuce McAllister’s mark of 6,096 that has stood since 2008. ... The Titans are tied for fifth in the NFL with 23 sacks. ... Titans RB Adrian Peterson ran for a TD in his season debut last week. He ranks fifth in NFL history with 14,841 rush yards and fourth with 119 rushing TDs. He is tied with Walter Payton with 125 career TDs and needs one touchdown to tie Jim Brown (126) for 10th place in NFL history. ... S Kevin Byard had his first career pick-6 last week. He has had an interception in four of his past five games and is tied for second in the NFL with five interceptions. His 23 interceptions since 2017 lead all safeties. ... Landry has nine sacks and is tied for third in the NFL. ... DT Jeffery Simmons had a career-high three sacks last week.

FANTASY TIP: Kamara if healthy. Not only did the Saints running back finish college in Tennessee, he leads the NFL with 66 TDs since his rookie season in 2017. He also had 104 scrimmage yards (54 receiving 50 rushing) and his third TD rushing this season last week.