After big contract for Jones, rough opener for Falcons 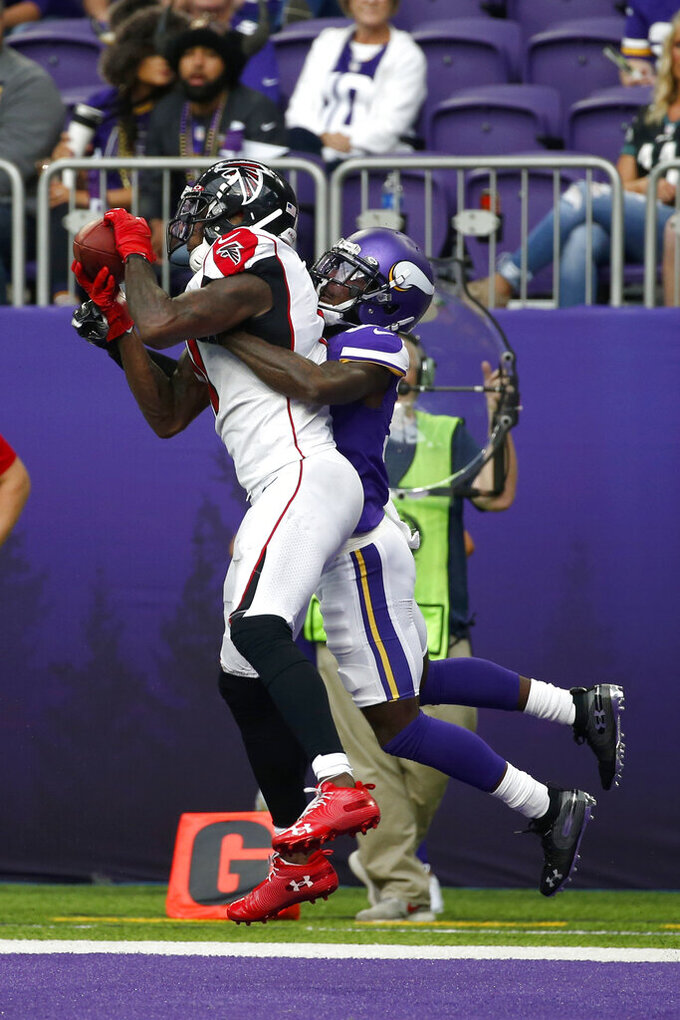 MINNEAPOLIS (AP) — For Julio Jones and the Atlanta Falcons, there will be many games in their future together when the two-time All-Pro takes over and leads the team to victory.

Now the NFL's highest-paid wide receiver, Jones expressed the even-keeled perspective of a ninth-year player with the second-longest tenure on the roster after an off-putting 28-12 defeat at Minnesota to open the season.

This performance against a daunting Vikings defense, though, was hardly the way for Jones or the Falcons to commemorate his new contract.

"It's the first game. We don't need to freak out, things like that, but at the end of the day, we control this," said Jones, who had six receptions for 31 yards and a late touchdown to make the fantasy football players happy while being targeted 11 times by Matt Ryan. "We're shooting ourselves in the foot, getting behind the sticks early on, and we couldn't stay out there on the field, get the defense some rest, things like that. We've just got to do better and we will be better. That's that."

Jones, the six-time Pro Bowl selection who led the league last season with 1,677 receiving yards and is one of only four wide receivers in history with three seasons of at least 100 receptions and 1,500 yards, was blanketed often by a second defender — as the Vikings have usually done against him under head coach Mike Zimmer. During the first of two interceptions by Anthony Harris, he wrestled the ball away from Jones after Ryan tried to thread it between the safety and cornerback Xavier Rhodes in the first quarter.

The Vikings have beaten the Falcons all four times since Zimmer was hired in 2014 and brought his aggressive defensive scheme with a penchant for shutting down an opponent's star receiver.

"Anytime you've got a dynamic player like that, it's always a team effort. You can't expect to put one guy on him," Harris said. "We have Xavier Rhodes on him, and he did a good job battling him all day. I think the combination of having high coverage and pressure up front has to go hand in hand."

In those four losses to the Vikings, Jones has just 19 receptions for 193 yards and the one score.

"We control all of this. It's not them, it's us," Jones said. "We've just got to do better all around the board."

Jones signed a three-year, $66 million extension Saturday before the team boarded the plane for Minnesota, with almost all of the deal fully guaranteed.

"For me, I just want to be a great teammate. All that other stuff, that's more so for my family. I'm not a 'me' guy, like, hey, being the highest-paid guy, you this, you that," Jones said. "I just love to be out there with my guys. My brothers, we go about it every day. I love it, and I'm ready to get back to work."

Though the negotiations lasted longer than expected, with just one day to go before the season kicked off, Jones said he was never worried, assurance in part that came from owner Arthur Blank and his desire to keep Jones for the remainder of his career.

"I had peace of mind. Talked to Mr. Blank, just talking about how appreciative I am of him and vice versa," Jones said. "The love I have for the organization, things like that. That's out the way now. At the end of the day, like I said, it's more so on us and just getting ready to play football."

The Falcons host Philadelphia next, a Sunday night game that will take on even greater urgency.

"We're definitely a work in progress across the board," Ryan said.