After Burrow says relax, Bengals pull off 2 wins in 5 days 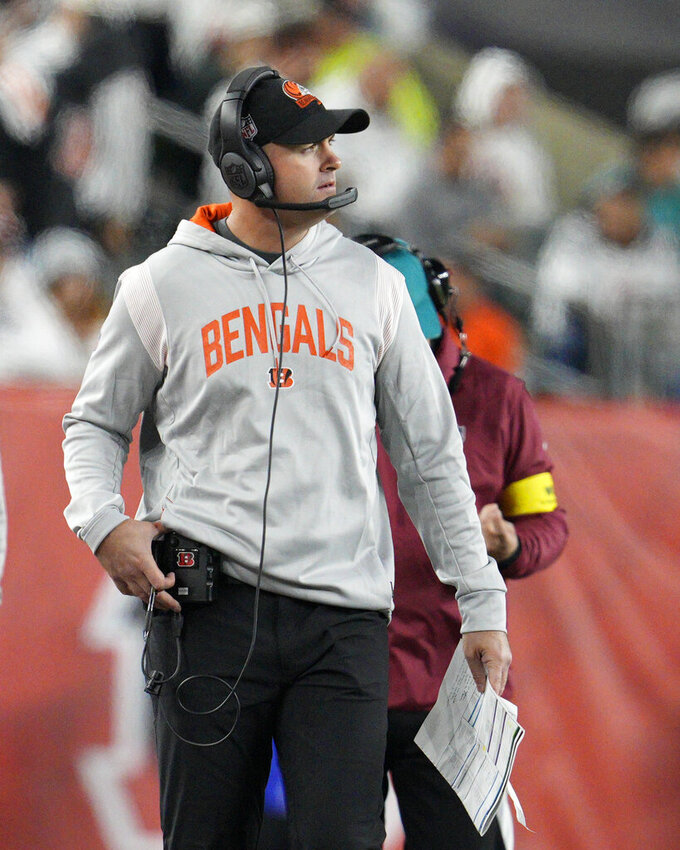 CINCINNATI (AP) — After Cincinnati lost the first two games of the season, Joe Burrow told everyone to relax. The Bengals would turn it around, the star quarterback promised.

Maybe feeding off the out-sized confidence of their leader, the Bengals reeled off two wins in the span of five days, including Thursday night's 27-15 triumph over the Miami Dolphins in front a record home crowd.

Burrow said the team looked at the quick Sunday-Thursday turnaround as an opportunity “to get that ugly taste out of our mouth" from the first two sloppy losses to Pittsburgh and Dallas.

“Then we have a long weekend to enjoy, get our bodies right, eat some good food, watch some football, enjoy the weekend and come back at it,” he said.

The third-year quarterback gave much of the credit to the offensive line, which got four new starters before the season and was slow to develop chemistry in the first two games when Burrow was sacked a combined 13 times.

Burrow was sacked twice in Sunday's win over the New York Jets and just once by Miami on Thursday. Plus, he had time for throw for 287 yards and two touchdowns against the Dolphins.

“Those guys really work hard to have a game like that,” Burrow said. “They took a lot of heat the first two weeks, but they are getting better and better. The protection was awesome (Thursday) and that's the way it will be going forward.”

Coach Zac Taylor was more effusive than usual after the Miami game.

“We got a great team, man. I love this team. I love everything about them,” Taylor said. “They didn't hesitate for one second those first two weeks when all the noise was getting loud, the expectations, all that. They didn't allow that to affect them for one second. They just came out there and answered the bell for two consecutive weeks.”

The game was marred by the sight of Miami quarterback Tua Tagovailoa being stretchered off the field after being sacked in the second quarter. The team said he had a concussion and would be evaluated further in Miami.

The passing game, for sure. Burrow had some miscues early but then zeroed in. Notable was a perfect pass to Ja'Marr Chase for 36 yards that set up the Bengals at the Miami 6 with three minutes remaining in the game. Three plays later, Burrow tossed a 2-yard TD pass to Hayden Hurst to make it a two-score game.

The Bengals left a lot of points on the field. Burrow's fourth-quarter hook-up with Tyler Boyd picked up 43 yards and put the Bengals on the Miami 6 with a new set of downs. But Joe Mixon ran the ball three straight times and couldn't get in, so Cincinnati had to settle for an Evan McPherson field goal. McPherson booted a 57-yarder later in the fourth when another drive stalled. In the second quarter, the Bengals decided to go for it on fourth-and-1 on the Dolphins 24, but Mixon was stopped cold and the ball turned over on downs.

Tee Higgins had his best game of the season, catching seven of his nine targets for 124 yards, including a 59-yard TD. ... Safety Vonn Bell had two interceptions. He picked off Teddy Bridgewater in the fourth quarter set up the scoring drive that wrapped it up for Cincinnati.

Mixon is running the ball hard, but he and the O-line haven't been able break him into the secondary for longer gains. He carried 24 times for 61 yards, an average of 2 1/2-yards per touch. His longest run was 7 yards.

TE Devin Asiasi left in the second half with an ankle injury. There was no update on his condition.

Plus-5 — Cincinnati's turnover margin in the last two games.

The Bengals will have some extra time to rest and recover before going on the road to play the AFC North rival Baltimore Ravens on Oct. 9.