After frustrating loss, young Cardinals working to grow up 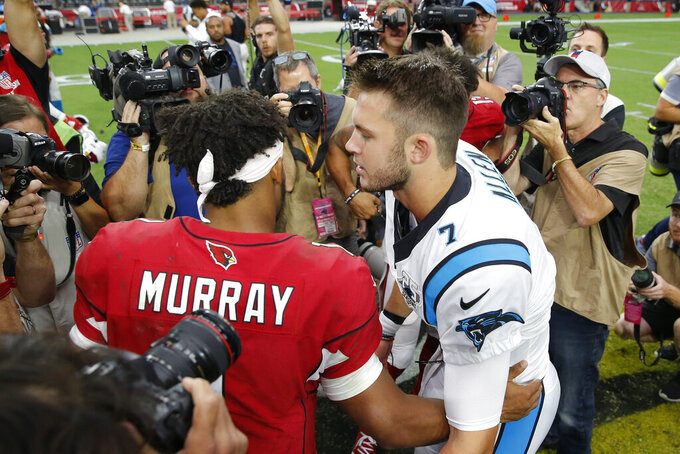 TEMPE, Ariz. (AP) — The time for moral victories is quickly coming to an end for the rebuilding Arizona Cardinals.

First-year coach Kliff Kingsbury has often preached patience, but he was obviously frustrated with the way the team played in the second half.

"We have to get better," Kingsbury said.

Arizona's defensive breakdowns were crucial , but the offense also had some growing pains. Rookie quarterback Kyler Murray completed 30 of 43 passes for 173 yards and two touchdowns, but he was also intercepted twice in the second half.

Murray was sacked eight times. Sometimes, the blame was on the offensive line. Other times, Murray held the ball too long while trying to make something happen.

Even with the problems, there's reason to believe Arizona (0-2-1) is building something positive in the desert. It just doesn't look like a quick fix.

"We're a very young team," veteran receiver Larry Fitzgerald said. "We have a lot of football left in front of us."

The Cardinals led 17-14 in the third quarter on Sunday and caused problems for the Panthers' defense thanks to the quick tempo. Murray used his speed more than he did in the first two games, gaining 69 yards on the ground. That made the Cardinals more balanced than they were in Week 2 against the Ravens.

"When we can run the football and mix it up with some play-action and do different things, we're a lot better," Kingsbury said. "Unfortunately, the first three weeks we've been behind and had to abandon it and not stay on schedule like you'd like. That's something we have to work on."

The offense wasn't nearly as productive in the fourth quarter when the Panthers pushed ahead by two touchdowns, but Kingsbury said that's largely because they had to pass more and became one-dimensional.

The defense had some big breakdowns, especially on Allen's 52-yard touchdown pass and McCaffrey's 76-yard run.

The Cardinals will eventually get some help when star cornerback Patrick Peterson returns from his six-game suspension, but in the meantime, Arizona needs to find answers after giving up 413 total yards to Carolina.

Kingsbury said the defense needs to get more consistent pressure on opposing quarterbacks.

"We've got some young guys in the secondary and asking them to hold up for that long is a tough task," Kingsbury said.

LB Chandler Jones continues to be one of the most disruptive defensive players in football. He sacked Allen on Sunday, stripped the ball and recovered it to give the Cardinals early momentum in the first quarter. Jones has 44 sacks since joining the Cardinals in 2016, the most for any NFL player over that span.

WR Trent Sherfield. The second-year player out of Vanderbilt has had some good moments for the Cardinals, especially in coverage on special teams, but he dropped a pass during the second half that hurt a promising drive.

3 — The number of opposing tight ends who have dominated against Arizona's defense. Detroit's T.J. Hockenson, Baltimore's Mark Andrews and Carolina's Greg Olsen have combined for 20 catches for 318 yards and four touchdowns.

"We definitely have to find an answer," Kingsbury said. "We're going to work through that this week. It's been unacceptable the first three weeks."

There is still hope in Arizona, but it's clear that this team isn't talented enough — especially on defense — to play well for just two quarters and expect to win. A consistent running game is crucial for the offense, and the defense must figure out ways to avoid the busts that led to Carolina's long touchdowns.

"We have a great group of veteran leaders who understand where we're at and what we're trying to accomplish," Kingsbury said. "That makes a nice luxury for the coaches. We know what we want to be as a team and where we're heading."