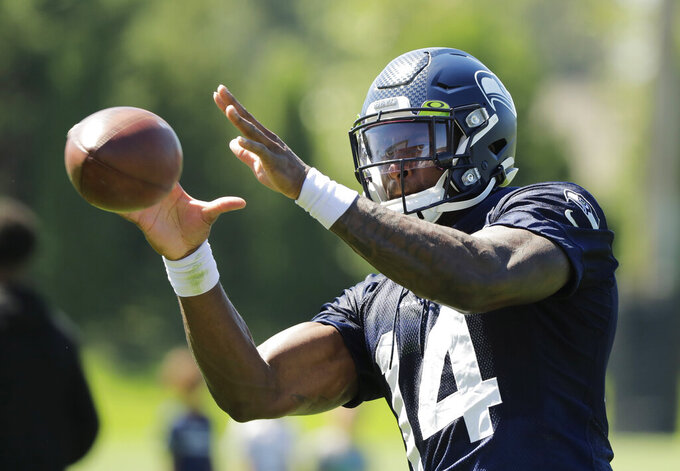 RENTON, Wash. (AP) — Because of the position he plays, his slide during the NFL draft and the team that selected him, DK Metcalf has spent the offseason in the spotlight.

As much as he's trying to avoid drawing the same kind of attention during his first training camp with the Seattle Seahawks, the 6-foot-4, 229-pound rookie receiver can't shake it. Fans are already showing up for practices wearing No. 14 jerseys, even though Metcalf hasn't caught a single pass in an NFL game. Coach Pete Carroll even joked that there is a Metcalf jersey hanging in the coaches' locker room.

"I was a nobody at one point in my life," Metcalf said Monday. "I've just got to keep that same mentality."

There's a reason for all the excitement. Metcalf's pre-draft workouts, where he ran a 4.33 40-yard dash, sent the league buzzing. Then his fall in the draft got even more attention. Expected to potentially go in the first round, Metcalf ended up being selected with the 64th pick in the second round after Seattle traded up, hoping to acquire the kind of target it has longed to add to its passing game — big, physical and bruising.

"He's worthy of it. He's an extraordinary athlete and what a tremendous addition to our club," Carroll said.

Metcalf was among the Seattle receivers who spent time in Southern California before the start of training camp working out every day with quarterback Russell Wilson. In fact, Metcalf came in a week earlier than many of the others and was using the fields at UCLA as the sun was rising.

The goal of the workouts was for Wilson and Metcalf to accelerate the acclimation process. Wilson already has a feel for what Tyler Lockett, Jaron Brown and David Moore are going to do in certain situations because they've been together at least one season.

"I think it's important to make sure you spend that time with certain guys and try to build those one-on-one relationships," Wilson said. "DK, being the guy that he is and the position he got drafted in, there's a lot of high expectations on him and letting him know that hey, we are here to do everything we can to make you the best player you could possibly be. The great thing is he makes it easy on us because he wants to put the work in."

Developing a target to complement Lockett is going to be critical for the Seahawks. For most of this decade, Doug Baldwin was the player that Wilson could turn to in critical situations. But Baldwin is unlikely to play again, so training camp and the preseason will be an important time to start finding another option.

Metcalf would seem to be the leading option, but he's not limiting himself to just catching passes. He has also been among the players working on punt returns.

"It's my first time doing it. Pray for me," Metcalf said with a laugh. "I like it back there."