After piggybacking on baseball, NFL stood tall in expansion 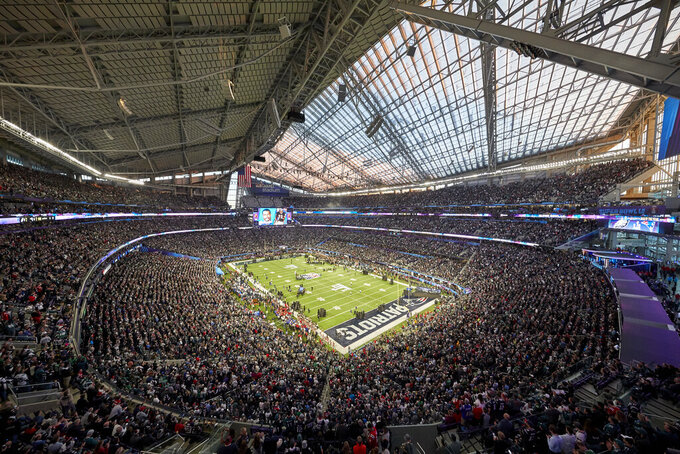 FILE - This Feb. 4, 2018, file photo shows a general view of U.S. Bank Stadium during the pregame of the NFL Super Bowl 52 football game in Minneapolis. In its early days, the NFL often relied on baseball stadiums for its teams. Often, the football team took the name of the baseball team, looking to create the illusion there was a connection between the teams. But once pro football expanded and was shown for free on television, the sport was on its way. (AP Photo/Adam Bettcher, File)

George Halas wanted an NFL team in Dallas, and in 1960 the influential founder of the Chicago Bears helped Clint Murchison get one.

Less than 10 years later, a league that for decades piggybacked geographically on baseball went from 16 to 26 franchises in a merger with the rival American Football League, making plans to get even bigger on its way to replacing America's pastime as the country's favorite sport.

Television fueled the success of both leagues in the decade before their 1970 merger, and expansion that pushed pro football into the deep South grew out of assurances from then-Commissioner Pete Rozelle that AFL franchises could stay in their existing cities.

"The availability of NFL games on free television even to this day is the single most important factor in the popularity and expansion of our sport," says Joe Browne, the league's longest-serving senior executive ever.

Within 20 years of the NFL's birth in 1920, the league settled into what is considered its original core of teams: Chicago, Cleveland, Detroit, Green Bay, New York, Pittsburgh, Philadelphia and Washington.

Before 1950, the only team with staying power south of Washington was in Los Angeles — and that was in part because Cleveland Rams owner Dan Reeves threatened to sue if he wasn't allowed to chase the Hollywood lights after his team won the championship in 1945, says Joe Horrigan, the NFL historian and recently retired Pro Football Hall of Fame executive director.

Between the Rams' move in 1946 and the debut of the Cowboys, along with the relocation of the Chicago Cardinals to St. Louis in 1960, the only addition outside the NFL's traditional geographic footprint was San Francisco in 1950 after the All-America Football Conference folded.

During those first 40 years, the comings and goings of franchises often were tied to baseball because of existing stadiums, Horrigan explains.

"Baseball was already established there and (NFL teams) could play in their stadiums and oftentimes even borrowed their names to create the illusions that they were affiliated with the baseball teams," he says. "The league was growing its own identity still and hadn't built a football stadium yet."

The additions of the Cowboys and Cardinals didn't change that. Dallas first played in the Cotton Bowl, a stadium built for and made famous by college football, another sport more popular with U.S. fans before the NFL's surge.

The Cardinals happened to have the same nickname as the baseball team at Sportsman's Park in St. Louis, with baseball ownership leading the bid for a new stadium that opened six years after the football team's move.

Even the Minnesota Vikings — an expansion partner with the Cowboys after the NFL swooped in on ownership expecting to get an AFL team — used a baseball-first stadium. They debuted in 1961 at Metropolitan Stadium, built in hopes of attracting an MLB team. The Twins moved from Washington the same year.

Browne says the thirst for more NFL teams led Lamar Hunt and Bud Adams to go after NFL expansion teams in the 1950s. When the renegade owners were rebuffed, they formed the eight-team AFL.

"The argument could be made either way that the announced start of the AFL resulted in these two teams," Browne says of the Cowboys and Vikings. "However, those two cities and several others were being discussed by the NFL for expansion for several years prior to 1960."

To help the 1966 merger agreement meet antitrust concerns in Congress, Rozelle promised that an NFL team already lined up in Atlanta and an AFL team in Miami could stay in those cities. The Falcons and Dolphins hit the field in '66.

About the same time, the league was interested in New Orleans because of the popularity of high school and college football in the South. And the Saints provided early signs of NFL teams standing on their own, knowing the football-only Louisiana Superdome was being planned. They began play in 1967.

Browne notes that a national survey then showed for the first time that pro football was listed as the fans' favorite sport over baseball.

"However, the NFL could not force expansion at too fast a rate because they wanted to maintain a competitive balance on the field and not have a watered-down product," he says.

That was it for new franchise for another six years.

Tampa already had built a smaller stadium that would house the Buccaneers, who were approved in 1974 for a debut two years later. Seattle, approved on roughly the same timeline, built the Kingdome hoping for football and baseball franchises. The Seahawks were the first team to play in it, and the Mariners soon followed.

The 28-team makeup lasted nearly two decades. It worked because the NFL far outpaced others sports in revenues and popularity.

That, naturally, didn't mean the league had no interest in further growth. Those 28 owners knew that expansion fees would reach nine figures compared with the $16 million the Bucs and Seahawks paid to join the party.

And they did. When Jacksonville and Carolina (located in Charlotte) were accepted as new members, it cost each franchise's owner $140 million. The Jaguars and Panthers began play in 1995 and both appeared (and lost) in their conference title games the next season.

After Art Modell moved the Cleveland Browns to Baltimore in 1996 in one of the most contentious franchise switches in football history, then-Commissioner Paul Tagliabue promised Cleveland an expansion team. He made good on that, and in 1999 the new version of the Browns was born — at a cost of $530 million.

A mere four years later, Houston became the 32nd team, and the Texans' fee was all the way up to $700 million.

While eight divisions with four teams provides exemplary balance, the question of whether another round of expansion — perhaps internationally to London, Mexico City or Canada — has been raised. That could lead to a $1 billion entry fee.

"Some of the other owners smiled at Malcolm and thought that might be several hundred million too much," Browne says. "None of those owners in 2019 are laughing at that dollar amount for the next NFL expansion, whenever that might be."

Horrigan figures the league would have expanded in the 1960s and '70s without the AFL threat, but he's sure the rival league's viability forced the issue. The Cowboys were an answer to Hunt's Dallas Texans, who became the Kansas City Chiefs in 1963 after winning the AFL championship. Adams' Houston Oilers stayed put through the merger before moving to Tennessee in 1997.

"The world was ready for more franchises," Horrigan says. "And the league was pretty comfortable with the status quo."

It's unlikely that a rival league can disrupt the status quo again, Horrigan says. The most notable attempts have been spring football, with dismal results.

The Alliance of American Football folded in April in the middle of its first season, nearly 20 years after wrestling magnate Vince McMahon's XFL lasted one season. McMahon is trying again in 2020. The USFL was the closest thing to a success, surviving three seasons in the mid-1980s.

"The NFL looked at it and said, 'Well, if there's a demand, it's reasonable that they could succeed in that league,'" Horrigan said of the USFL. "The original founders were really focused on that. Then a couple of more aggressive owners, Donald Trump being one, came along and really were just looking for a cheap way into the NFL.

"They felt that they could force a merger and just merge in. So these expansion fees will not only prevent that sneaking, backdoor entrance into the league, but it will control who you have as your owners."

Plus, those NFL power brokers don't have to worry about competing with baseball — or any other sport — these days.