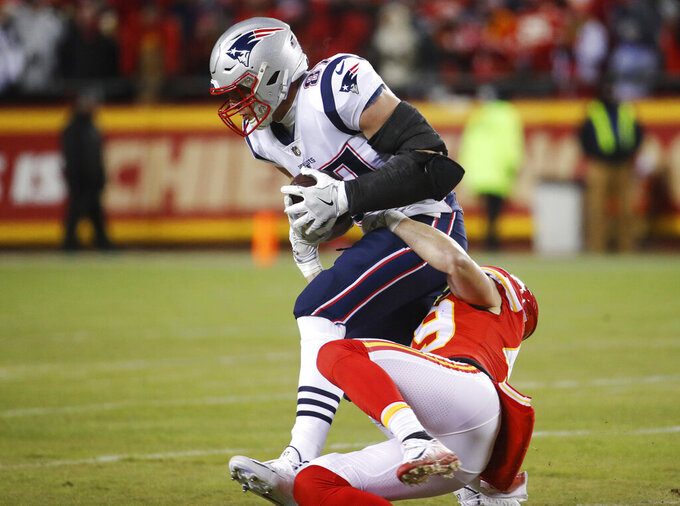 FOXBOROUGH, Mass. (AP) — Even as Rob Gronkowski turned in a vintage performance with his big grabs down the stretch in the AFC championship game, the veteran Patriots tight end also did plenty of dirty work.

Gronk the blocker? The label didn't fit in the past. But this season, one of the best receiving tight ends in NFL history and Tom Brady's longtime favorite target made some big contributions to the Patriots' rejuvenated running game.

"Whatever coaches call, whatever plays we call ... blocking, receiving, no matter what is, whatever play is called, just got to go out there and do your job," Gronkowski said.

It was an underwhelming season statistically for Gronkowski, who contemplated retirement after last year's Super Bowl loss. He appeared in 13 games as he fought through nagging back and ankle injuries, finishing with 47 catches for 682 yards and three touchdowns.

But Gronk did more of the things that don't appear on the stat sheet. And he's fine with that as he heads into a Super Bowl matchup with the Rams eyeing the third ring in his nine-year career.

Brady said Gronkowski's ability as a blocker might be the most underrated part of his game.

"He's one of the most dominant blocking tight ends in the league," Brady said. "He's a threat any time he's out there."

One of his biggest plays in the Patriots' overtime victory over Kansas City for the AFC title came in the run game.

After the Chiefs took their first lead, New England responded with a 10-play, 75-yard drive that ended with Gronkowski pushing aside Kansas City linebacker Justin Houston on fourth-and-inches and allowing Sony Michel to jog into the end zone from 10 yards out.

Gronk's future beyond this season is once again an open question. He will be entering the final season of a six-year contract in 2019 and is scheduled to make about $9 million. Before the season, he acknowledged he would like to rework the deal, and he skipped a voluntary offseason workout. He later had bonus incentives added to his contract.

He'd be missed if he doesn't return. After a quiet performance in the Patriots' divisional playoff win over the Chargers, Gronkowski was targeted a season-high 11 times against the Chiefs, catching six passes for 79 yards and coming up with big grabs down the stretch.

Brady was 5 for 5 on third down in the fourth quarter and overtime, with two of those passes going to Gronkowski. Those catches, for 25 and 15 yards, set up the go-ahead and game-winning touchdowns.

It was nothing new for the 29-year-old Gronk, who entered the season with 75 postseason receptions — the most by a tight end in NFL history. In the regular season, he has the most TD catches thrown by Brady to any player (78).

The Rams' defense was the second-worst in the league this season, giving up 1,075 yards receiving to opposing tight ends. It should mean plenty of opportunities for Gronkowski to show the combination of size, strong hands and agility that has made him a matchup nightmare throughout his career.

His chemistry with Brady means he knows the ball could always come his way, no matter what kind of game he's having.