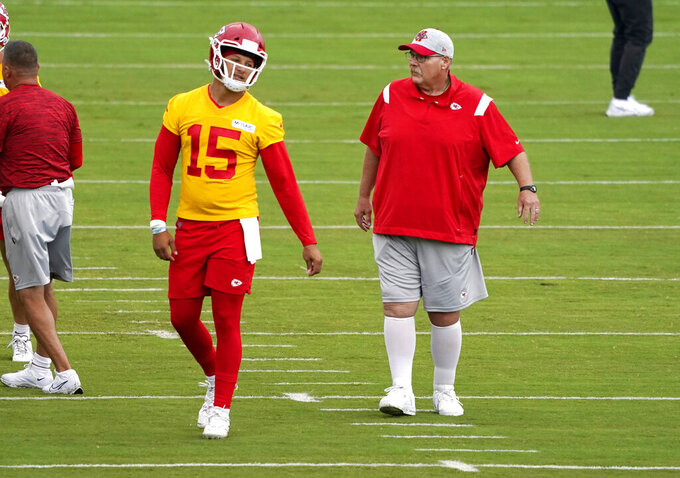 ST JOSEPH, Mo. (AP) — During a normal offseason away from the NFL, Kansas City Chiefs wide receiver Tyreek Hill can usually be found working out in the gym or running routes on a high school football field.

This year, he needed a mental break away from football.

“Playing a whole season and even going to the Super Bowl is like crazy,” Hill said. “Just to be able to get my mind off football and Andy Reid’s play calls is good for me.”

Hill opted to spend more time with his family this offseason after the Chiefs lost to the Tampa Bay Buccaneers in the Super Bowl, taking a vacation to Hawaii and getting engaged to his fiancee on the Fourth of July.

Chiefs players have acknowledged their need to restore their minds as well as their bodies heading into a new season, especially after the grind of two consecutive postseason runs to the Super Bowl. Safety Tyrann Mathieu tries to separate his football life from his personal life.

He’s an admitted workaholic when training camp begins, which makes the offseason extremely important to him.

“I’d probably say for me personally, I’m such a mental space kind of guy, any time football kicks off I really have no time for anything else,” Mathieu said. “I just try to create that balance in my life, try to give as much time to my family as possible, as much time to my community as possible, because I know once football season gets here it’s hard to get my mind off anything else.”

Defensive tackle Chris Jones normally does pilates during the offseason but this year he also added yoga to his routine, cutting back on other workouts to focus on flexibility and mental wellness.

“I always say that there’s a lot of kickers sitting on the couch that are better ball strikers than me, physically better kickers, but for whatever reason, they weren’t able to put it together,” Butker said.

Butker uses his own form of visualization meditation by picturing the spot of the kick, imagining the wind direction and slowing down his breathing.

“Mentally, the better you are, you’re going to separate yourself as a kicker," Butker said. "That’s why a lot of teams trust those veteran kickers that maybe don’t have the leg strength, but in big moments when they really need a field goal, they can count on that kicker to deliver under a big pressure moment.”

The Chiefs have played 42 games in the past 24 months including preseason, regular season and postseason action. That’s two more games than any other team, and along with extra practice time necessitated by back-to-back Super Bowl runs that’s more than a full month of additional work than any other NFL team.

In 2019 the club added a full-time team clinician, Shaun Tyrance, a licensed therapist with a doctorate in counseling and a master’s degree in sports psychology.

“He meets with every player throughout the year, and his door is always open,” Reid said. “Nobody’s too big not to step up and say, “Listen, I’ve got a problem.′ We’ve all got them.”

NOTES: LB Willie Gay Jr. missed his second practice on Friday after entering the league’s concussion protocol on Wednesday. … RG Laurent Duvernay-Tardif (hand) and WR Antonio Callaway (knee) did not attend practice on Friday. … TE Nick Keizer (back) passed his physical and returned to action from the non-football injury list.