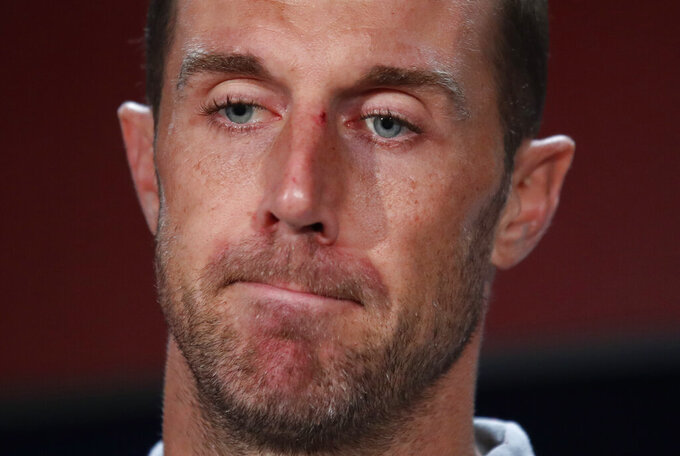 FILE - Washington Redskins quarterback Alex Smith speaks at a news conference after an NFL football game against the Indianapolis Colts in Landover, Md., in this Sunday, Sept. 16, 2018, file photo. Alex Smith is retiring from the NFL after making an improbable comeback from a broken leg. Smith announced his retirement Monday, April 19, 2021, on Instagram, saying he still has plenty of snaps left him just shy of his 37th birthday but is calling it quits to enjoy time with his family. (AP Photo/Alex Brandon, File)

Smith made the announcement on Instagram a few weeks shy of his 37th birthday, hoping to enjoy more time with his family.

“I want to say thank you for believing in me, and thank you for helping me believe in myself — and in the impossible,” Smith said. “Because even though I’ve got plenty of snaps left in me, after 16 years of giving this game everything I’ve got, I can’t wait to see what else is possible.”

Smith earned AP Comeback Player of the Year honors for getting back on the field last season, two years removed from an injury that required 17 operations. After breaking his right tibia and fibula in a game Nov. 18, 2018, against Houston, he said he wondered if he'd be able to take walks with his wife or play with his kids in the yard — let alone play in the NFL again.

He was hospitalized for almost a month and survived a life-threatening infection in addition to the operations. Smith spent the next year and a half rehabbing and was back at practice when Washington assembled for training camp last summer.

Smith's first game action since the injury came Oct. 11 when Kyle Allen was injured, and he made his first start at Detroit on Nov. 15. He went 5-1 as the starter, including a victory at Philadelphia in Week 17 on a strained right calf that clinched the NFC East title for Washington.

“He accomplished the greatest comeback in professional sports history and was a huge part of our team's success this past season,” owners Dan and Tanya Snyder said in a statement. “We witnessed every step of Alex's comeback, and he personifies perseverance, strength and the will to never give up.”

The injury prevented Smith from playing against Tampa Bay in the wild-card round the next week, which Taylor Heinicke started and impressed enough to earn another contract.

Smith told GQ earlier this year that the organization didn't expect him to play again. Coach Ron Rivera agreed with those comments, noting he was worried about Smith's health.

“The biggest thing he and I talked about, really, was that there was really no roadmap to get us to where we were,” Rivera said last month. “He worked his butt off to put himself in a position to come back and play. ... It was always in the back of my head: ‘What if he gets hurt again? What if he hurts that leg, that specific leg?' I don’t want to be the guy that put him back on the field to let him get hurt again."

"I’m going to take a little time to enjoy a few of those walks with my wife, and my kids have no idea what’s coming for them in the backyard," he said.

In a statement Monday, Rivera called Smith an inspiration and “the ultimate professional and one of the finest leaders” he has ever coached.

A self-professed “skinny, no-name recruit,” Smith was the No. 1 overall pick out of Utah in 2005 and played 14 seasons for San Francisco, Kansas City and Washington. He threw for 35,650 yards and 199 touchdowns in 174 regular-season games and played in seven playoff games.

“Football wouldn’t let me give up because, no, this isn’t just a game,” Smith said. “It’s about how hard and how far you can push yourself. It’s about the bond between those 53 guys in the locker room and everybody else in the organization. It’s about fully committing yourself to something bigger.”

San Francisco CEO Jed York said, “Alex represented our franchise with class both on and off the field, and his contributions to the 49ers organization will be remembered forever.”