All eyes on Carson Wentz in first Commanders training camp 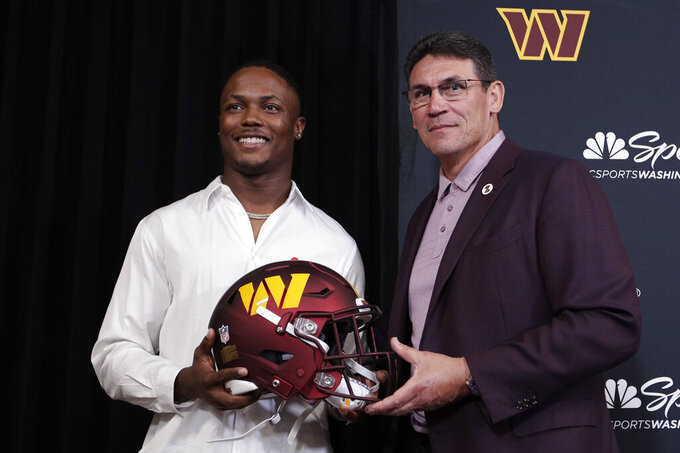 LAST YEAR: New quarterback Ryan Fitzpatrick injured his left hip in the season opener, pressing surprise playoff performer Taylor Heinicke into a starting role for the first time in his NFL career. The defense that came in with lofty expectations after ranking second in the league in 2020 struggled early and contributed to a 2-6 start. Despite losing pass rusher Chase Young to a torn ACL, Heinicke beat Tom Brady and the defending champion Tampa Bay Buccaneers and Washington went on a four-game winning streak to jump into the playoff hunt. Injuries and virus absences took their toll down the stretch and contributed to four losses in a row that dashed any postseason hopes.

CAMP NEEDS: Wentz finally gets a chance to build chemistry with Terry McLaurin after Washington's top receiver missed offseason workouts while mired in contract negotiations. Camp will be all about what Wentz can do with the offense that previous quarterbacks could not. On the other side of the ball, Young's comeback from his knee injury bears watching with an eye on him being ready for Week 1.

KEY CAMP COMPETITIONS: Very few, actually, in what could be seen as an evolution of the roster going into coach Ron Rivera's third season. Most importantly, there's not even an illusion of a QB competition because of Wentz, and most of the offense is pretty well settled. Who replaces Collins at the so-called buffalo nickel spot is a question, along with 2021 first-round pick Jamin Davis trying to establish himself as a starting linebacker in the pros.

EXPECTATIONS: Rivera isn't yet on the hot seat, but the organizational expectation is to make the playoffs in the first season known as the Commanders after the previous two as the Washington Football Team. There's a reason the club traded for Wentz and drafted a handful of players who are more polished than other prospects but might have lower ceilings. Winning a weak NFC East at 7-9 in 2020 perhaps raised the bar too high too soon for Washington. But now there's a concerted effort amid fan apathy and sagging attendance to at least earn a wild-card spot and start contending again.