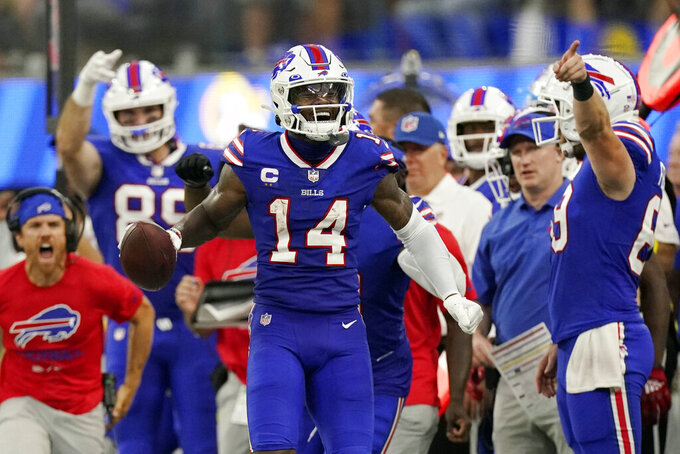 Buffalo Bills wide receiver Stefon Diggs (14) celebrates after a reception during the first half of an NFL football game against the Los Angeles Rams Thursday, Sept. 8, 2022, in Inglewood, Calif. (AP Photo/Mark J. Terrill)

ORCHARD PARK, N.Y. (AP) — The rapport between quarterback Josh Allen and receiver Stefon Diggs has become so intuitive, all it takes is a glance or a shimmy of the shoulder for the Buffalo Bills' dynamic duo to know where the ball is bound to be thrown — and, more often than not, caught.

Sometimes, it might just take a word or two, which happened when Allen scrambled out of the pocket to hit Diggs for a 53-yard touchdown that put the finishing touches on a 31-10 season-opening rout of the Los Angeles Rams last week.

“Just run,” Diggs said, recalling what Allen told him coming out of the huddle. “So the one thing I’ve learned is, do what the quarterback tells you.”

Simple as that might sound, the chemistry they’ve developed in their third season together stems from countless hours of practice and constant dialogue about what works best for both.

“In that first year, everybody was about how things clicked so fast. It was just guys playing football,” Diggs said, referring to his first season in Buffalo in 2020, when he became the Bills' first player to lead the NFL in both catches (127) and yards receiving (1,535).

Allen believes there are many more layers the two can peel away as the Bills prepare to face Tennessee (0-1) on Monday night.

He said the key to Diggs' success is how late he raises his hands to catch the ball so to not tip off a defender the ball is on the way.

Diggs is coming off an opener in which he caught eight of nine passes thrown his way for 122 yards, while mostly being covered by one of the NFL’s premier cornerbacks in Jalen Ramsey. It marked the 14th time Diggs has had eight or more catches and 10th time he’s topped 100 yards in just 34 games with the Bills.

The touchdown was Diggs’ 19th in Buffalo since being acquired in a trade with Minnesota in March 2020, and 49th of his eight-year career.

“Living the dream,” Diggs said Wednesday. “I tell the guys in the locker room all the time that I’m living my best life.”

He was referring as much to his production as to the stature he’s attained in Buffalo. The team leader was rewarded with a four-year contract extension this offseason.

That’s a switch from Diggs’ first five seasons in Minnesota where he was productive despite playing a secondary role behind receiver Adam Thielen and on a team with a run-first offensive philosophy. It’s also where he also picked up the reputation of having a mercurial personality — which Diggs doesn't dispute — for pouting after losses and complaining about playing time.

The 28-year-old Diggs’ transformation with the Bills was readily apparent against the Rams when he played the role of team cheerleader during a first half in which Buffalo turned the ball over three times. Watching from the sideline while rookie running back James Cook lost a fumble, Diggs greeted his teammates with an upbeat message by saying: “Chin up, chest out.”

“Being a young player, you don’t know how much body language and energy translate,” Diggs said.

“Bad things do happen. It’s not the end of the world,” he said. “Things are going to happen. But this offense is good. And if we’re as good as we think we are, we’ll go back out there and put our best forward.”

The offense eventually found its groove by scoring touchdowns on its first three drives of the second half, capped by Diggs’ score.

For all he’s accomplished, Diggs says the credit belongs with Allen.

“Josh told me a long time ago, and it’s given me confidence as a receiver and even as a friend, as a player, however you want to dress it up,” he said.

“He said, ‘Your job is to get open and catch the ball. That’s what I need from you.’ He didn’t give me any specifics,” Diggs said. “And that’s something. I trust my quarterback. ... That’s how you build that relationship.”