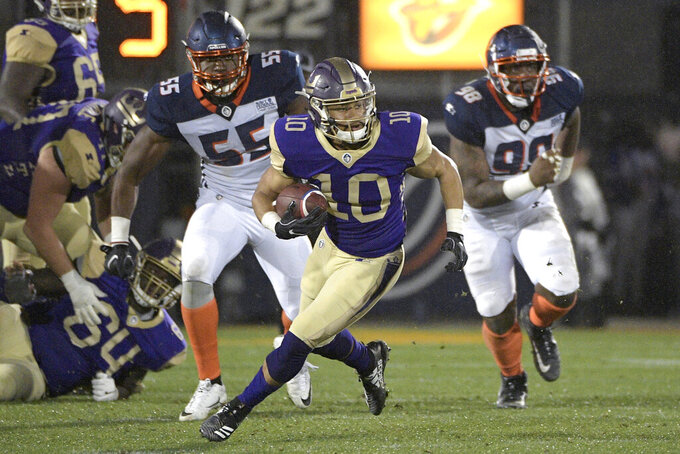 FILE - In this Feb. 9, 2019, file photo, Atlanta Legends receiver Justin Thomas (10) runs with a reception in front of Orlando Apollos linebacker Andrew Ankrah (55) and defensive end Anthony Moten Jr. (98) during the second half of an Alliance of American Football game in Orlando, Fla. It’s too early to tell what impact the league will have on the sport itself. After all, this is its fourth weekend of games. Away from the field, with an infusion of backing to the tune of $250 million from Tom Dundon, owner of the NHL’s Carolina Hurricanes, the AAF is finding its footing. It’s also finding what co-founder Charlie Ebersol calls “substantial interest” in the league in such areas as sponsorships and partnerships, with three new partners signing on since the season opener three weeks ago. (AP Photo/Phelan M. Ebenhack, File)

It's too early to tell what impact the Alliance of American Football will have on the sport itself. After all, this is its fourth weekend of games.

Away from the field, with an infusion of backing to the tune of $250 million from Tom Dundon, owner of the NHL's Carolina Hurricanes, the AAF is finding its footing. It's also finding what co-founder Charlie Ebersol calls "substantial interest" in the league in such areas as sponsorships and partnerships, with three new partners signing on since the season opener three weeks ago.

"It has been an interesting ride for us, and part of the challenge of launching is that we were focused on the product on the field," Ebersol says. "We needed to make sure we got that right.

"Then the first weekend we had huge ratings. I got to meet Tom and he stepped in as chairman. It also brought a lot of sponsors to the table we had not had before. A lot of the traditional sponsors had come to sample us and would say, 'I want to see what happens.' We only began negotiating the bigger partnerships and that story is only growing. We're blessed that the growth of the league week after week allows us to engage with them."

Indeed, Ebersol notes, the AAF's increase in viewership on the night of the Academy Awards spurred more interest in his eight-team league.

"A lot of the agencies are coming to the table," Ebersol adds, then promises "you are going to see the financial and automotive (industries) now integrating into our broadcasts over the next few weeks."

For now, there are six official partners, including three newcomers since Feb. 9 in Navy Federal Credit Union (banking); Wheels Up (aviation); and At Home (home decor). Others are MGM Resorts (gambling), the league's first partner; New Era (head wear); and STARTER (uniform).

Why would a company get involved with a startup sports venture, particularly in pro football, where the NFL, even with its warts, is so dominant? MGM, for example, is an investor in the league, whose season will end on April 28 with a title game.

The CEO of At Home, Lee Bird, attended the Alliance opener on Feb. 9 in San Antonio with his son. He not only signed up as a partner, he began calling other potential partners, encouraging them to get involved.

"When the Alliance debuted with this unique platform allowing us to continue to reach customers through high-quality spring football, we leapt at the opportunity to become a partner," Bird says. "The Alliance gives us an ideal vehicle to promote At Home ..."

The company even has branding on the jerseys of the Salt Lake Stallions and San Antonio Commanders this season.

Dundon, whose Hurricanes have become among the most creative marketers in hockey, is looking for more such integration in the Alliance.

"Because the broadcast looks good and there have been good ratings," he says of the games televised by CBS, CBSSN, Turner and NFL Network, "what we need to think through is how do we give our partners or sponsors more than buying a traditional ad? Redesigning the football, perhaps? How we do replay? Multiple broadcasts that are streamed if the viewer is not a person who wants to watch the regular traditional broadcast? These are some of the things we think are pretty exciting, so how do we get the real benefits for us and (league sponsors)?

"We want to keep this league very intriguing with the things we have in mind, innovation with sponsors and technology, and hopefully do what people want to get more engaged with the brand and with our football."

Ebersol points to strong merchandise sales, noting that some DICK'S Sporting Goods outlets have sold out of AAF paraphernalia in league cities.

"We do special displays in the eight markets, and they have needed restocking in multiple markets," he says. "Someone had to go to three stores to get the product they wanted."

What Ebersol, Dundon and Pro Football Hall of Fame executive Bill Polian, the Alliance's other founder, believe America wants is what the AAF says it can provide: quality spring football as something of a developmental league for the NFL, with which it has no affiliation. And fans want quick games — they all come in at 2 1-2 hours or less — with fewer stoppages and shorter commercials, often using split screens so there's always a camera showing what's occurring in the stadium.

While offensive play has been spotty at best, with inaccurate quarterbacking, porous lines and enough dropped passes to turn any coach's stomach, defenses have looked strong thus far. But no one expected in the first month of play to be watching Tom Brady or Russell Wilson, although they do turn up in a Wheels Up game commercial that has drawn much attention.

AAF executives and fans need to be patient as they watch for the on-field product to improve as players get more acclimated with each other and coaches learn the strengths and weaknesses of their squads. The push off the field to become, well, a player in the pro sports market, is immediate, ratcheting up daily.

"One of our messages is we are in the entertainment business," Dundon says. "Let's make sure to give back to the fans, but the other side is it helps the players, too, whether it's their fans watching them or an NFL team watching, or a sponsor watching. You never know where the next opportunity will come."